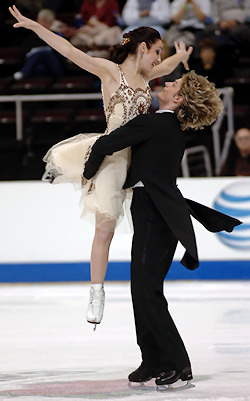 Meryl Davis, 22, and Charlie White, 21, are currently in first after the Compulsory Dance.

The 2009 AT&T U.S. Figure Skating Championships are being held Jan 20-27 at the Quicken Loans Arena in Cleveland, Ohio. Approximately 263 skaters are competing in the Novice, Junior and Senior divisions of the event.

Skaters are competing for spots on the U.S. Team that will travel to the World Championships in March, as well as the Four Continents Championships and the Junior World Championships teams. Each of those competitions could earn the skaters points towards ISU rankings that help determine which skaters will compete on the ISU Grand Prix next season.

Additionally, a strong placement at the U.S. Championships will land skaters into official Team Envelopes for funding from U.S. Figure Skating.

With the withdraw of five-time and reigning champions Tanith Belbin and Benjamin Agosto due to injury, Meryl Davis and Charlie White moved into the spotlight as the clear front runners.

“We were at the Grand Prix Final when (Belbin and Agosto) pulled out, so we knew that Ben had an injury,” Davis said. “So we weren’t really surprised. Obviously we are very disappointed for them, but that’s sport. We know that they will be back soon, and that they will be as strong as ever.”

As the newly anointed favorites, Davis and White did not let themselves or the crowd down with their opening program – a magical Viennese Waltz that transcended the cheesy karaoke track music that played in the background.

“The dance had a lot of attack and expression,” White professed. “All of the things that we have been working on at home. It’s always good when that can happen at a competition.”

Competing in only their third senior level championships, last year’s silver medalists performed with the vivre of professionals and the technical prowess of many champions who have come before them. Davis and White had the largest dance pattern on the ice today, and showcased deep and secure edges as they mesmerized the audience with their ethereal interpretation.

“We are trying to enjoy ourselves here,” White explained. “We can get too serious sometimes, so we are just pleased that we were able to skate so well today.”

With a total score of 39.93 points, Davis and White are in a comfortable lead ahead of second place finishers Emily Samuelson (Ann Arbor FSC) and Evan bates (Ann Arbor FSC), who earned 36.28 points.

In only their second year on the championship level, Samuelson (17) and Bates (18) are beginning to establish themselves as the ones to watch – not just for the future, but here and now.

“The dance felt very strong,” admitted a happy Samuelson. “We have been working on it for about two years now, and it felt good out there today.”

We got a personal best score,” Bates continued, “so that is a good sign. We are always anxious to get out there and get one under our belts, and this was no exception.”

Navarro (26) and Bommentre (24) skated the Viennese Waltz for the first time in competition here, and only started to train the dance seriously after their Grand Prix season came to a close.

“This is the first time that we have skated this dance in competition,” admitted both skaters. Navarro continued, “In an ideal world, we would have had more training with this dance, but we are pleased with how we danced it.”

Navarro and Bommentre skated early in the competition, and set a fine tone for the rest of the field to follow. Their score of 35.22 points keeps them within site of the leaders, and could stand them in good stead heading into the original dance later in the week.