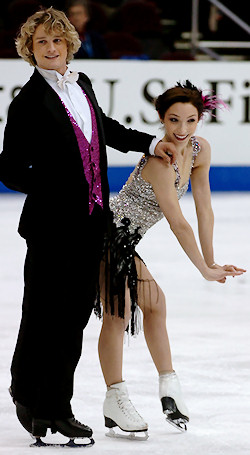 Meryl Davis, 22, and Charlie White, 21, won the OD with their performance to Happy Feet.

In the original dance competition, favorites Meryl Davis (Arctic FSC) and Charlie White (Arctic FSC) extended their lead over the field with an impressive program that had the audience eating right out of their hands.

“We are pretty happy with what we did today,” Davis said. “Technically it wasn’t our best, but we look forward to continuing to grow on this performance.”

Skating to Happy Feet, the reigning silver medalists earned positive GOEs on each of their elements, and outscored the second place team by almost eight points.

Davis (22) and White (21) were fast, sure footed, and showed some of the deepest edges in the competition. However, what really stood out was the polish of the performance quality in this program.

Coach Igor Shpilband believes that this program is the most technically demanding program ever to be put on the ice, but the skaters weren’t so sure to agree with that statement.

“This program takes a lot of energy,” White explained. “You know with the happy feet and all the expression in the dance.”

A giggling Davis interjected, “I think that it takes a lot of effort for us to keep our focus on the performance with all of the technical aspects of the program, but is it the hardest ever? I’m not sure.”

The leaders scored 61.93 points for their efforts, and head into the free dance with a total of 101.86 points.

Presenting a playful story to the music of Irving Berlin, the World Junior Champions showed that they are ready to compete with the nation’s best with a strong performance that was chock full of demanding elements.

“There are some small things that we need to work on,” Samuelson said, “but in general it was a good performance. We were able to really portray the character of dance from the 20s, 30s and 40s.”

“I think that we are very happy with how we skated, but apparently we lost a lot of points technically,” Navarro noted. “That was not our focus tonight clearly, and we did a great job on what we did focus on, which was the performance.”

Navarro (27) and Bommentre (24) struggled with the levels in their program, receiving only a level two on their twizzle sequence, and earning a level four for just their opening dance spin.

“Our levels are definitely something that we are going to look at on our practice day,” Bommentre announced. “Everything felt good to us, but we have to look at it and make sure that everything is okay for the free dance.”

With a segment score of 54.30 points and a competition total of 89.52 points, Navarro and Bommentre are barely holding on to their podium spot with the next three teams less than three points behind them.

Following closely behind Navarro and Bommentre are last year’s Junior Champions Madison and Keiffer Hubbell (Ann Arbor FSC), who actually placed ahead of them in the original dance.

“We were happy to skate a really strong performance,” admitted Keiffer. “We haven’t really had a clean program this season, so it was nice to do that.”

Madison added, “We felt really prepared here, and this is a nice assurance for us as we look forward to hopefully being named to the Junior World team.”

The Hubbells skated a sexy program to Minnie the Moocher, using their long lines and playful personalities to accentuate the choreography.

“I’m kind of just a loud outgoing person,” admitted Madison. “I’ve never been shy, so this program is almost more fun for me because I can exaggerate that side of me. Some people think that because we are brother and sister, that it might hurt us in that regard. But instead, I think that it helps us because we can just be who we are and not have to worry about being awkward.”

Placing fifth in both the original dance and overall was Jane Summersett (Broadmoor SC) and Todd Gilles (Broadmoor SC) with a score 54.43 points, and a total of 86.91 points.

“It was an okay skate for us,” Gilles lamented. “It was a little shaky.” “Yeah, we can do better,” Summersett added. “Our goal here is to medal, and we are going to work to make that happen in the free dance.”

Just behind Summersett (21) and Gilles (22) is the new team of Morgan Matthews (SC of New York) and Leif Gislason (Ice Works SC) who finished in third place in the original dance, but remain in sixth place overall.

Matthews (21) and Gislason (25) seem poised to make a move in the free dance, and could use the momentum from this placement to move up in the standings.

“We had no idea of where we might be placed heading into this competition,” Matthews said. “We just wanted to come here and do our best so that we have a starting point to go on.”

In ninth place is Lynn Kriengkrairut (All Year FSC) and Logan Giulietti-Schmidt (Ann Arbor FSC), and Charlotte Maxwell (Stars FSC of Texas) and Nick Traxler (Star FSC of Texas) are in 10th.