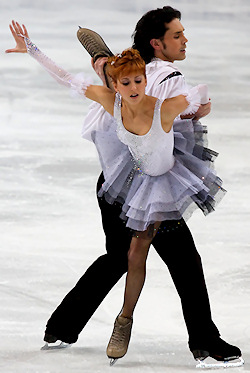 Jana Khokhlova and Sergei Novitski of Russia perform to Rhapsody on a Theme by Paganini and Caprice 24 for their Free Dance.

The dance competition concluded with an impressive showdown in the Free Dance in which most of the couples were able to show their best performances.

Skating last, Khokhlova and Novitski were obviously focused on performing a clean program and avoiding making mistakes. However, unlike their performance at the 2008 World Championships in Goteborg where they were under similar pressure, the couple appeared more comfortable and confident on the ice.

Novitski admitted that the long wait was a new challenge for them.”We don’t often skate last. Usually we skate first, so it was an experience for us. It was hard to wait until our main rivals had skated, and more than 30 minutes had passed until we went out, but I think we dealt with it well.”

While they skated their “Paganini and his muse” routine better at the Russian National Championships in Kazan, their performance in Helsinki was also emotional and touching.

Interestingly enough, the careful approach to the execution of the required elements subdued the normally flamboyant Khokhlova more than her partner, which made the balance in the team more equal than ever before. The couple scored 97.31 (49.50/47.81) points for their free dance, and with a total score of 196.91 points, they won the title by impressive 10-point margin.

The two-time and current Russian Champions were completely overwhelmed at the press conference. “I would like to thank all the people who helped us here,” said Khokhlova. “Our lovely coaches, lovely parents, our choreographer, and all the people who supported us here today. We put our all our emotions there on the ice. It was just amazing to perform today in front of a supportive audience. We had to wait a long time, but it was worth it. I am so happy, and I think Sergei is happy too.”

Novitski joined his partner in expressing gratitude toward their coaches, friends and relatives. “We are very happy with what we did,” he added. “We were aiming at winning a gold medal here of course, but to really win it – it’s great. We are so happy. I think it still has not registered with me yet, but I would like to thank all the people who supported us today.”

Nathalie Pechalat and Fabian Bourzat of France skated first in the last warm-up group, and their performance remained unmatched until the last couple took the ice. However, their second place in the free dance was not enough to earn them a medal, and the team received only small silver medals in a heartbreaking ceremony before the final press conference with the medalists.

The students of Alexander Zhulin were the most relaxed of all the teams in the final group, maintaining excellent flow throughout their routine, and their bold curves emphasized their basic skating skills. The French Champions were appropriately subdued in the first half of the dance, and the audience remained quiet throughout it. However, the upbeat second part in which they imitate clowns was performed to enthusiastic applauds.

“It will be even better at Worlds,” promised Bourzat. “It’s quite good right now. We feel confident about our free dance, but we still have a lot of work to do.”

The team received good levels and grades of execution on most of their elements, however, their serpentine lift was only graded a level two. They scored 92.90 (46.90/46.00) for the free dance, and with 184.84 points overall, missed the podium by 0.36 points.

“I didn’t think we are going to medal here,” admitted Pechalat afterwards. “Our goal was to skate well and we did, so we are happy. I think the Italian and British teams have a really good free dance.”

The Kerrs placed third in the free dance and overall to claim their first European Championship medal. Even amidst the excellent performances of the other teams, their dance to Ruled by Secrecy by Muse stood out as the most poignant routine of the evening. However, there is still room for improvement on the technical side.

The Scots’ lines and extension in particular, were not was strong as those of the other top ranked couples, and they received a level three for their straightline lift, as well as the synchronized twizzles after John had a small wobble, on the first one. However, the choreography of their routine was superb. The students of Evgeni Platov scored 92.60 (46.90/45.70) points in the free dance, posting exactly the same technical score as Pechalat and Bourzat, and finished with 185.20 points overall.

“We had strong emotions,” confessed John afterwards. “The response from the audience was great. It’s a very emotional moment, such a great feeling. It is the first medal for Great Britain since Torvill and Dean (1994 European Championships).”

“The atmosphere in rink was unbelievable,” added Sinead. “Electricity was in the air and everyone in the top group was great. I left all my emotions on the ice. I don’t really know what to say. I think I just don’t understand it yet. I suppose I will get up tomorrow and start crying.”

When asked what they said to each other at the end of the performance, John replied: “It might sound very cheesy, but I said, ‘Whatever happens, the journey was worth it.'”

“He really said it!” confirmed his sister. “I agree… we were happy with our performance no matter what happened and to win a medal… I was so nervous. I told our coach that was the worst four minutes of my life!”

The team also thanked their coach Evgeni Platov and their team for the support, and wished good luck for their teammate Jenna McCorkell. “This championships has been a really good one for Great Britain. Hopefully it would be a new start for figure skating in our country. We have been doing it for several years now, and to be the first ones (to win medals) after a while means a lot. It’s a great honor. Hopefully, it’s a good omen for tomorrow for Jenna. We will be rooting for her.”

Faiella and Scali, who were second coming into the free dance, finished fourth (91.11 points) in this portion of the event, but remained in second overall (186.17 points).

“It is unbelievable how happy we are tonight,” said Scali at the press conference. “We have been dreaming of winning medals since we were 10-years-old, and in the last three years, we were waiting for it. We were so close last year, and finally we did it. It is really hard to describe the feeling, it’s so strange.”

The couple once again had troubles gaining level four on their serpentine lift. “We had some issues with it at the Grand Prix Final,” explained Scali. “We really worked toward to get the level four for it, but we just saw that we got once again a level two, so we were a bit disappointed. We will probably have to change it. It is so stupid to lose points on the lifts as lifts are the easiest way to get points.”

Skating to Beethoven’s Moonlight Sonata, the Italian Champions explored the theme of the moonstruck Pierrot in their free dance. While the choreography of their program does an excellent job of developing this theme, the weight of expectations was obvious in their performance: Scali had a noticeable wobble during the first lift, and the couple somewhat appeared to be holding back on emotions.

“The pressure was really high,” Scali said, “because we were for the first time in this situation. We tried to skate our best, and I think we did pretty good job today. There was a little moment of panic in the beginning, but I guess we covered it pretty well. It’s an important thing to know how to handle such a big pressure, and we would like to thank our coaches, our entire team, and the audience for their support. During the warm up [the support] was amazing.”

Regarding their plans for the upcoming World Championships, the skaters stated that they would have to work even harder now.

“We will keep working even harder,” noted Scali, “because when you are on the medal place, you have to practice even more. We have to improve our free dance. During the Grand Prix series, we often got good scores in compulsory and original dance, but not in the free – especially the technical mark. We have finally achieved level four spins in both the original and free dances, and we would like to keep it this way. We will also work on our step sequence. I think we are quite capable of easily…. well, easily is may be not the right word, but of achieving a level four on them. So we need to work more on edges and such.”

Teammates Anna Cappellini and Luca Lanotte were able to pull up one spot with a flawless performance to Love Story. The team once again excelled in execution of the required elements, and the strong basic skating skills, combined with their charisma and chemistry, made their routine one of the most memorable moments of the competition.

“We really like Pelletier and Sale skating to Love Story in 2001,” said Cappellini. “No one has skated to it for some years, so we thought it would not be too boring for people. Also, it’s a simple and effective theme.”

“We are really satisfied,” said Cappellini. “We made no mistakes and skated with our hearts. We wanted to really feel, push, and bend. When we compete, we always want to do well, keep our standings. This competition lasts for so many days and I’m happy to be finally done.”

In preparation for Worlds, the team plans to work on some elements as well as their power, speed, and bending. “Our choreography and expression are fine,” said Cappellini, “but what [separates] us from the top couples is the quality of our skating. We’re also looking forward to the Olympics to move up in standings.”

Ukrainians Anna Zadorozhniuk and Sergei Verbillo finished sixth in the free dance with a passionate performance to G. Bizet’s Carmen, but remained in seventh place overall.

Pernelle Carron and Matthieu Jost of France, who were fifth coming into free dance, slipped to sixth overall after their final straightline life was deemed illegal by the technical panel.

The event concludes with the Ladies Long Program.