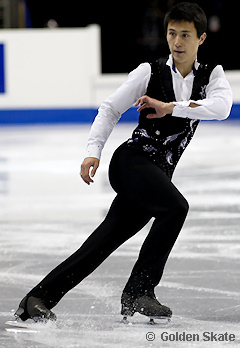 Skaters always dream of that one perfect skate when all of your elements are flawless, the crowd is on your side, and oh yeah – you place first in the competition. Canadian Patrick Chan did all that in the Men’s Short Program in his home country.

The two-time and reigning Canadian champ was clearly the class of the field, landing perhaps the best triple Axel of his young career, along with beautiful spins and textbook perfect step sequences. Chan also landed a great triple flip-triple toe loop combination and a solo triple Lutz in the program.

“I didn’t feel the greatest as I waited for my turn to skate,” admitted Chan. “I didn’t feel as confident as I did at Nationals, but after I landed the Axel, I started feeling better.”

Skating to Tango de los Exilados, Chan’s program picked up momentum with each perfected element, until the audience burst out of their seats with 10 seconds still remaining in the program.

“I didn’t know that the audience was standing so early in my program,” Chan later said, “but I could definitely hear them, and it was amazing.”

“I took full advantage to really play the crowd and to enjoy it,” the 18-year0old continued. “I gave myself chills. I know when I have chills at the end of the program, I know it was a good program.”

Chan not only scored the second highest short program score of the night, but his technical elements score of 50.30 points is the highest total ever recorded. All of Chan’s technical elements were given positive grades of execution, rewarding him with 10.70 points more than his base value. The 2008-09 Grand Prix Finalist scored 88.90 points overall, and carries a seven-point lead heading into the freeskate.

American bronze medalist Evan Lysacek also had a great program tonight, but Chan was just too good for the two-time Four Continents Champion.

“While waiting in the final warm-up group to get on the ice, Patrick was finishing. Seeing Patrick’s score come up, and knowing that he had done one of the best short programs ever, was inspiring,” Lysacek said appreciatively.

Lysacek opened with a fine triple Axel, and then landed a clean triple Lutz-triple toe loop combination in his Bolero program. On his next element, a triple flip, the 23-year-old earned an edge alert from the technical specialist – a problem that has plagued the two-time U.S. Champion.

Like Chan, Lysacek also received positive grades of execution on each of his elements, but only earned 4.9 points more than his base value. However, he seemed pleased with his efforts, choosing to see this as an improvement over his most recent competition.

“I leaned on my coach as I always do,” said Lysacek in reference to his disappointing loss at last month’s U.S. Championships. “He always has the right advice for me, and he explained that as an athlete, you have great performances and bad performances.”

Lysacek added, “This performance is a definite step up from U.S. Nationals, and I am just trying to gain momentum as I look forward to the World Championships in my hometown.”

In total, Lysacek earned 81.65 points, a slightly higher total than his season’s best.

Finishing in third place was Japan’s Takahiko Kozuka. The two-time and reigning Japanese silver medalist opened with a nice triple Lutz-triple toe loop combination, but struggled on the landing of his triple Axel.

“Even when I was at home in Japan practicing, the Axel wasn’t in the best form,” admitted Kozuka. “But I did practice it a lot, so maybe that is why I was able to get it so close. I just went for it and tried to finish it up.”

Kozuka’s Take Five program was smooth and controlled, but lacked the spark of both Chan and Lysacek. His short program total of 76.61 points is well below his personal best, but he is still in the hunt for a medal.

“I didn’t have a great warm up,” the 19-year-old explained. “I had a little bit of errors. Once I started skating the program, I made one little mistake, but that is good enough for me.”

The newly-crowned American champion, Jeremy Abbott, had a magical opening to his Adagio program, sailing through his most difficult elements. After landing a textbook triple flip-triple toe loop combination and a credible triple Axel, Abbott fell on his easiest jump, a triple Lutz.

“This definitely was not my best,” admitted the 2008-09 Grand Prix Final Champion. “Fortunately this is not a one-program competition, and I have lots of opportunities to earn points in the freeskate. I’m kind of killing many birds with one stone here in preparation for future competitions. I am using this competition to put the quad into the freeskate before Worlds, and I am getting to try it in the Olympic venue as well.”

Later in the program, Abbott also touched his hand down on his circular steps, possibly costing him a level and earning him a negative grade of execution. The 23-year-old relied on his trusty program component scores to keep him within earshot of the podium, scoring a total of 75.67 points.

Teammate Brandon Mroz followed up his surprising silver medal winning performance at last month’s U.S. Championships with a spectacular display of technical wizardry that is fast bringing attention to the high school student.

The U.S. silver medalist skated a clean program, tripling the Axel, a Lutz-toe loop combination, and a flip. Mroz earned the third highest technical elements score of the night, and his total of 75.05 points puts him in fifth place heading into the freeskate.

Japanese champion Nobunari Oda had a disappointing program, struggling on the landing of both ends of his triple Lutz-double loop combination. The 21-year-old missed fifth place by .01 of a point, scoring 75.04 points for his efforts.

The event continues with the Free Dance and the Ladies Long Program.