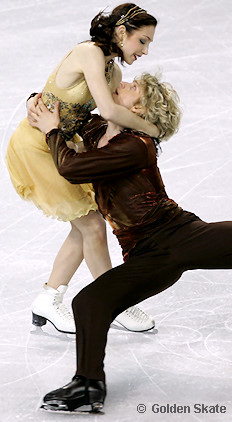 USA's Meryl Davis and Charlie White won the Free Dance with their routine to music from Samson et Dalila by Saint-Saëns.

It was a tight race for the gold medal in Ice Dance at the 2009 Four Continents Championships from start to finish.

Canadians Tessa Virtue and Scott Moir took a small lead into the free dance over Americans Meryl Davis and Charlie White. In the end, however, it truly came down to one level on a dance spin. To put it in sports terms, Virtue and Moir lost by a revolution.

American champs Davis and White have been solid in competition all week, and today they skated a brilliant free dance to music from Samson et Dalila. This week is a coming out of sorts for Davis and White, who broke through with their first international championship title.

“It felt powerful and emotional,” White said of the program. “Those are the two things that have been really key this season for us. It felt like we could go out there and give it everything we had.”

The young Americans demonstrated technical mastery in all of their elements, earning level fours on everything save the circular steps. However, the most impressive part of the program was the huge step forward that this duo took in terms of telling the story of the program.

“Things have been coming together this season,” Davis explained. “Last season and the year before we were working on different aspects of out skating, and I think that this season it all came together. We have been working pretty hard and we are happy with our performance.”

The gold medalists earned a total of 96.74 points for their free dance, and 192.39 points overall, which is the second highest total internationally this season.

Virtue and Moir have fought all week to perform at their highest possible level while Virtue struggles to recover from her October surgery. After winning both the compulsory and original dances, the Canadian champs came into the free dance with a hesitating confidence.

In the warm-up Virtue appeared to be struggling with most of the elements, but she pulled it together in the actual performance when it counted.

“We are pleased with our skate,” Virtue said tenuously. “In some ways it was better than nationals, and others it wasn’t.”

In their opening combination spin, Virtue put her foot down momentarily causing the team to lose a level on the spin. The mistake cost Virtue and Moir .70 points in base value, more than enough to propel them to the win had they not made the mistake. Still the silver medalists were thankful for the experience, and didn’t seem to allow the loss to affect their mental state.

“To get out internationally before we go to worlds is huge,” Moir shared. “We always like doing this competition. We knew that if we were able to do it, then we would be here.”

However, Virtue and Moir’s Pink Floyd program shows great promise, and could be a signature piece for them if they are able to skate up to its potential. The lifts in particular are crowd-pleasers, and earned the silver medalists crucial bonus points in Grades of Execution (GOE). For now, however, the program was somewhat frantic and sloppy in spots.

“Certainly mileage will help with that,” Virtue admitted. “I think it’s a good vehicle for us. I think that this program can definitely develop a lot more.”

“It is good for our confidence just to be here no matter what our placement is,” Moir added. “It’s important for us internationally.”

“It feels really good for us to get this under our belts and it’s a confidence booster,” commented Virtue. “We’re heading home feeling really positive. We’re really proud of Meryl and Charlie. They certainly deserve it.”

“We’ve been dreaming big since we were really little,” said Samuelson of she and her partner who have been skating together for nine seasons. “We saw ourselves representing the U.S. all over the world.”

Bates added, “Hopefully this is the first of many Four Continents Championships. We’re really happy to be on the podium with two of the best teams in the world. For the future, hopefully this means a lot of good things.”

The reigning World Junior champions skated like they belong on this level, presenting a mature look with their Amazonic program. In fact, Samuelson and Bates carried their technical mastery over from the original dance, and scored the second highest technical scores behind Davis and White.

“We were able to execute all elements and give a good performance,” Bates said. “It was a personal best, so we are really happy.”

As a compliment to their technical prowess, Samuelson and Bates are developing into majestic performers who can draw you into their performances. A score of 89.90 points in the free dance is a new personal best for the duo, and they just fell short of eclipsing their personal best overall with 180.79 points.

In fourth place was the young Canadian team of Vanessa Crone and Paul Poirier, the silver medalists behind Samuelson and Bates at last year’s World Junior Championships.

“We put on a solid performance,” Crone said.

Poirier agreed. “We got our speed and performance level up. We projected well to the audience.”

Crone and Poirier, like the champions, earned a level four on all of their elements save the circular steps with their routine to Doce de Coco. A new personal best of 88.03 points in the free dance gave Crone and Poirier a competition total of 176.82 points.

Finishing in fifth place were teammates Kaitlyn Weaver and Andrew Poje with a commendable performance to music from Doctor Zhivago. USA’s Kimberly Navarro and Brent Bommentre continued to struggle with levels in their Fatboy Slim medley program to finish in sixth place.