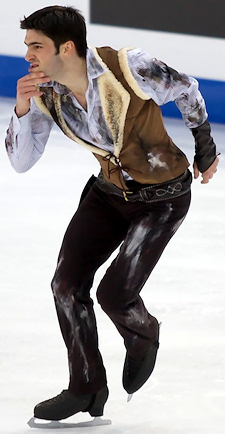 Italy's Samuel Contesti performs a western-theme routine to Once Upon a Time in the West and Cotton Eyed Joe for his long program at the 2009 World Figure Skating Championships.

Samuel Contesti came out of nowhere to take the silver medal at the European Championships and to place 5th at Worlds. His story was one of the most intriguing comebacks of the year.

In 2006, Contesti was disesteemed and outcasted by the French Federation. In 2008, however, he returned as a competitor for Italy. Last season, he inspired the audience and judges alike, and achieved Italy’s best Men’s singles result in 55 years.

“This is a wonderful victory for all of those who supported me,” Contesti said at Europeans Helsinki.

Meanwhile, some French officials were following the success of their former athlete with rather grumpy faces. Contesti’s silver medal at the 2009 European Figure Skating Championships was bitter for them.

While the former Frenchman came in behind Brian Joubert at both the 2009 European and World Figure Skating Championships, Contesti edged out the other French skaters Yannick Ponsero and Alban Préaubert at Europeans and beat Ponsero again at Worlds. Contesti won his medal for his new country at Europeans, and it was the first one for an Italian man since Carlo Fassi was European Champion in 1954.

Contesti’s career looked promising until 2005. The son of former French first division soccer player Yves Contesti grew up in Gap and followed his two elder sisters on to the ice when he was four years old. “I was a very active child and I needed to exhaust myself,” he said, grinning. “Actually I wanted to play soccer. I just love soccer, and I like all kinds of sports in general. I just had to spend my time and so I went skating,” he recalled. “Later I started to compete and I discovered that it was competing that appealed to me a lot.”

Contesti trained in Annecy under Didier Lucine, who had some other successful skaters in his club. In 2005, he qualified for the first time for the European team and finished 9th. He also went to Worlds, but missed the final cut when he was ranked 26th after the short program.

In 2006, Contesti finished second at French Nationals behind Joubert, however, he wasn’t named for the European team in Lyon. At the same time, Frédéric Dambier, who was ranked fourth at Nationals, sued the French Federation in order to be nominated for the team and won his case as he had achieved more points in his Grand Prix event than Contesti. The French Federation originally had included the results from the Grand Prix into their selection criteria.

Contesti, obviously deeply disappointed that he couldn’t go to Europeans and fight for a spot for the Olympic Games, thought about switching to Monaco, but this small Federation probably didn’t want any trouble with France and the plan didn’t work out. Therefore, the skater competed at French Nationals in 2007 where he placed third. He was selected for the French World team, but then withdrew two weeks prior to the event citing injury.

Another setback had hit the skater in fall 2006, when the French Federation withdrew him from Skate America, writing to the ISU that he was not in proper shape after Contesti didn’t skate in a monitoring competition, the French Masters. “I knew that this would happen,” the 26-year-old said with a bitter laugh. “I told everyone, ‘you will see, I won’t get to go.’ What happened with Skate America didn’t come as a surprise to me anymore. It was just the logical continuation of what had happened before.”

Contesti knew that he had no future as an athlete in France, and decided to switch to Italy. His family is of Italian origin and he had married Geraldine Zulini in February 2007, a former French Junior Champion who holds both Italian and French citizenship and used to train in Annecy. Meanwhile she had retired from competitive skating and turned to coaching.

Contesti had to wait two seasons and then had to start from scratch to work his way up in the rankings. He first competed for Italy in smaller competitions like in The Hague in March 2008 and in Vienna in the fall of 2008. He needed to pick up some world ranking points and to get a few competitions under his belt. In the spring of 2008, he left Annecy and coach Lucine, and moved to Courmayeur in Italy as his wife started coaching there.

“It was impossible for me to stay behind in Annecy,” Contesti explained. “I didn’t marry to live 300 kilometers apart from my wife. I asked her if she wants to coach me, because I felt that it wouldn’t be a problem for her and she felt that she was able to do it too. Additionally we got help from (Swiss coach) Peter Gruetter, who has been supporting us since last August.”

It is rather rare that a husband is coached by his wife, but Contesti doesn’t see any problems. “The question is how you deal with it,” he pointed out. “A lot of people warned us and said, ‘You will see, this won’t be easy, it won’t work.’ For me, it was obvious that I would stop skating if it didn’t work. We didn’t marry for skating. She is making the decisions on the ice, and I’m listening to her.”

Obviously, it worked out – very well. Italy welcomed their new skater with open arms. Contesti was received like “a king,” especially in the Aosta Valley and Courmayeur. “In Courmayeur I got everything that I needed to train at my best,” he said. “The Italian Federation gave me good conditions which made it easier for me to train. I hope to receive some more support from them to help my preparation for the Olympic Games and the World Championships that will take place in Torino very close from where I live.”

Contesti denies that he was driven by the desire of revenge, or that it felt especially good to beat some French skaters in competition this past season. However, he still probably enjoyed his triumph over his former federation that treated him so badly.

“I have nothing to prove,” declared the two-time Italian Champion. “I was second at French Nationals at the time. I wanted to keep my level. I worked on my weaknesses. I kept going, because I liked skating. If I loose my motivation one day, I just will pack up my skates and do something else.”

“I’m not aiming at getting to the top,” Contesti continued. “I just want to skate and to perform well. The result depends on what the others are doing, on the judges, on the impression you leave with the audience. There are so many things that I just want to focus on what I can control, which is my performance. I cannot influence anything else; therefore I’m not looking at the placement. I’m looking at my performance. To be second at Europeans with a strong performance was just great. Nobody can take away this medal from me. My team and I worked a lot for it.”

Contesti seems to be a little withdrawn, even wary, which isn’t surprising considering what he went through. His family and friends supported him during the difficult times of his career, and as a result, he is relying on them to this day and makes sure that he is surrounded only by people he can trust.

“Now I have the best conditions possible,” the former Frenchman said. “I have to stay healthy and I have to be with people that we can rely on and that help us. Then everything will be fine.”

There are no bad feelings between Contesti and the French skaters. “I’ve never had any problems with the French skaters,” said Contesti. “Everyone is just defending his own place. I don’t think that they have any problems with me. May the best man win.” At Europeans, Joubert greeted Contesti with a genuine smile at the press conference. “I would have liked to have had three Frenchmen on the podium,” commented Joubert. “We couldn’t do it, but it’s great for Samuel.”

Contesti is extremely happy with this past season. “I had fun out on the ice and in practice. I want to thank once more my whole team. They were great: Geraldine, my wife and coach gave me so much; Peter Gruetter, whose experience and record are impressive; Patrick Bergouignan, my mental coach who helped me to deal with the stress and other things.” Contesti also thanks his sister Mathilde, who helped him with dance lessons, as well as the rest of his family, friends, and other people who supported him.

Contesti is hoping to show the quad next season in competition. He took it out of his free program at Worlds, but in practice he has landed both the quad toe and Salchow, and is looking to getting at least one of them consistent enough to put it out in competition. In July, Contesti took part in a training camp in his native Gap in France and then went to Pinzolo in Italy for three weeks. In August he wants to return to Courmayeur. He will change both programs, but isn’t ready to reveal the music yet.

Once August has arrived, the next season is about to start. Contesti has been selected for the Cup of China and Skate Canada in November. “I had two goals last season and they are the same for this (new) season, which is to enjoy what I am doing and to give the best possible performances. If I achieve this, I’ll be pleased regardless of my placement,” the European silver medallist pointed out.

He will attack this year with full force. Not only his status as an athlete has changed, but also life brought a big change: Contesti became father of little son Ennio in early June.