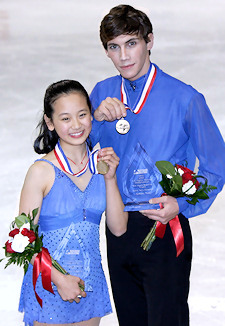 Felicia Zhang and Taylor Toth placed first in both their programs to win the Junior Pairs title at the 2010 AT&T U.S. National Figure Skating Championships.

Like Isaac Newton and his apple, Taylor Toth learned that a bump to the head can be a good thing.  After an on-ice accident before the short program on Saturday, Toth and his partner Felicia Zhang won both phases of the Junior Pairs competition to claim the title.

“To be honest, I spent the last two days in bed except for practice,” Toth said of the affects of the collision on Saturday.  “I was not feeling well, and then today in practice, I felt much better.  The whole time I was thinking to myself that we have done this program so many times that we could do it in our sleep.”

Zhang and Toth have skated together for just under a year, and have already materialized as a strong prospect for Sochi in 2014.  The duo rivaled their championship contemporaries in technical merit if not in total competition score.  As it was, the newly crowned champions earned a total of 153.80 points that could have put them in seventh place in the championship division.

I’m really happy that we got to do the triple toes,” Toth admitted.  “It really shows that we will be ready to move up to the senior level, and this is perhaps the most satisfying performance of my career.”

Zhang and Toth are one of three teams that are eligible to skate at the World Junior Championships in March, so it is likely that they will be named to the team.

Finishing in second place after winning the pewter last year is Britney Simpson and Nathan Miller, who had an uneven performance in their Moonlight Sonata freeskate.

“We know that we can do a lot better than we just did,” Simpson said with a hint of disappointment.  “We’ve been training better than this and very hard.”

The silver medalists opened with a beautiful split triple twist, but Simpson put her hand down on the throw triple Salchow and struggled with her double Axel.  A fall by Simpson on a double flip proved too much for the team to overcome, and they finished with 147.29 points – more than six points behind the champions.

“Our goal was to improve off of last year,” Miller confessed.  “I thought that throughout the program we stayed in character.  That is an improvement that we have made in this performance.  We kept ourselves together to try to keep our components as good as we could.”

Finishing in third place after placing fourth in both the short program and freeskate was Erika Smith and Nathan Bartholomay, improving eight spots from their eleventh place finish from last season. Smith and Bartholomay, who have been skating together for a little less than two years, made two errors in their Iron Man program, but were nevertheless pleased with their efforts.

“We made some mistakes, but I think that we showed lots of attack,” Bartholomew said of the performance.  “We showed a lot of good things about ourselves, so that’s what we will take away from here.”

The bronze medalists, who are not eligible for the World Junior Championships, skated with an unassuming elegance that earned them a total of 133.54 points in the competition.

“I think that we learned a lot about each other here, and that helped us out a lot,” Smith explained.  “We learned how to react to each other which is a good lesson.  For instance, before the short program, we both got very quiet but we started talking after that to help settle each other down.”

Smith and Bartholomay shouted with joy when the learned that they would stand on the podium, and Smith started hugging everyone within her reach.

“I’ve never got a medal, so I’m absolutely thrilled,” Smith said with a smile.

Falling from third place after the short program to win the pewter medals are Caroline Ann Alba and Christopher Knierim, who overcame a mistake laden program to stand on the podium in their first season together.  Their total of 133.19 points was just enough to hold off a charge from the fifth place finishers Brynn Carman and AJ Reiss.  Knierim and Carman competed as a team last season, and won the silver medal together at the U.S. Championships.

“I felt like crying because I was so happy,” said Cain of being in first place. “I’ve never been to nationals in singles, and it made me really happy to be there.”

Leah Keiser (All Year FSC)  is in a close third with 44.59 points. “As long as I keep myself focused, everything is fine,” Keiser later told the press. “Today I was able to do that.”

“It’s very exciting, and you get a big adrenaline rush when you’re out there,” she continued. “When I first came here, I knew how big the arena would be, but I was shocked to realize that I would be skating in it after watching the competitions for so many years.”

“There’s nothing as good as gold, but we would have been happy no matter what,” said Cain.

“I’m a little disappointed because of the Lutz,” Vollmer said of her fall, “but other than that, everything else was pretty good.   We just wanted to improve throughout the year, and we did that so we’re happy.”

“We skated as well as we could have,” added Sidhu, “and we improved on all of the things that we wanted to improve upon.”

Mandy Garza (Texas Gulf Coast FSC) and   Brandon Frazier (All Year FSC), who stood in fourth after the short, placed second in the long and third overall (112.69 points) to win the bronze.

“We’re excited we did so well,” said Garza. “It’s our first nationals and our first year in novice.”

‘How we have been training, this program wasn’t what we expected,” added Frazier. “But we pulled it through.  At the beginning, we were a little bit nervous, but once we adapted to our surroundings, we finished off strong.”

“I’m not happy about my skate because I missed two jumps,” said Chen, who placed third in the long program. “But everything else was okay. It feels really exciting to win the gold medal.”

“I’m really happy with my performance,” said Savary. ”  This is my first nationals, and I was just really have fun. I feel so excited to know that all of the hard work that I have done every day paid off.”

Timothy Dolensky (Atlanta FSC), who stood in ninth after the short, catapulted to third overall (133.17 points) after placing first in the long program.

“There wasn’t that many points between me and the leaders,” noted Dolensky. “I really like my program and practice it really hard.  I knew that I could skate well. I thought that I could medal if I skated my best.”