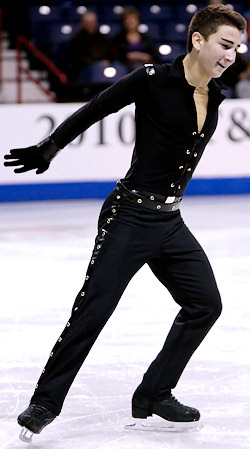 It could be said that figure skating is backbreaking work, and Max Aaron (Broadmoor SC) is a fine example of just that.  The 17 year-old is in first place after a crowd-pleasing short program that marked his return to the national stage after a back injury kept him sidelined for the 2008-09 season.

“After the U.S. Championships in 2008, I started having pain in my back, ” Aaron explained after the competition.  “Sometime around March of that year, I had x-rays that indicated that I had a fractured L-5 vertebrae.”

After three months in a cast, Aaron went through intensive physical therapy to mend his back, and  was able to return to the ice for simple stroking maneuvers shortly thereafter.

“It took a while to get back to skating full out,” Aaron admitted,  “but with therapy and stretching, my back is stronger than it was before the injury.”

Aaron opened his Once Upon a Time in Mexico program with a strong triple Axel followed up with a nice triple Lutz-double toe loop combination.  However, the leader did not earn credit for his camel spin, and struggled with levels on his step sequences later in the program.

“It’s in the past,” Aaron said optimistically.  “The free skate starts with a clean slate, and since we are all so close at the top, it really is anyone’s game.  I’m not going to think about what everybody else is doing; I’ll just focus on skating my program the best that I can.”

Brown, who just turned 15 last month, opened with a triple Lutz-triple toe loop combination that was marred by a step between the two jumps.  The pony-tailed skater then leaped into a solid triple flip jump, and sailed cleanly through the rest of his Hey Pachuco program to earn 62.10 points.

“I wish the Lutz-toe was better,” Brown said about his combination,  “but the crowd and the lights (in the arena) were exciting.”

In his first year as a junior, Brown skated solidly and earned high levels on his non-jump elements, including level fours on two of his spins.

“Everyone is so much bigger and stronger,” Brown said of his debut on the (national) junior level.  “Everyone has all of the jumps, so it’s more of an even playing field.  You have to find something else to make you stand out.”

What makes Brown stand out is his attention to performance in his programs – a fact that was not lost on the audience. “I’ve always liked performing,” he said.  ” I love acting in plays, and I have been watching Ryan Bradley for a long time.  He is someone I really look up to.”

Finishing in third place is veteran Austin Kanallakan (Los Angeles FSC), who was 3rd in this event back in 2007, which ironically was also held in Spokane.

Kanallakan opened his Cliffs of Dover program by stepping out of a credible triple Axel attempt.

“I was probably a little too cautious,” admitted the 18 year-old,  “but the program was decent.  I normally bomb in the short program at nationals, so this is a good boost of confidence.”

“I’m tired,” Kanallakan said after his program.  “It would have been nice to get some rest, but we had practice this morning at five o’clock.”

In fourth place is 15 year-old Joshua Farris (Broadmoor SC), a training mate of Aaron’s, who is the 2009 novice men’s champion.

Farris opened with a fall on a triple Axel attempt, and struggled with his next element – a triple Lutz-double toe combination to score 58.24 points.

“This is my first year on the junior level, so I had no expectations of placement,” Farris said after his program.

Farris, who skated an entertaining program to Stardust and Sing, Sing, Sing, was rewarded with high program component scores for his efforts.

In fifth place was Scott Dyer (Columbia FSC) with 57.34 points, followed by Peter Max Dion (SC of Boston) in sixth place with 55.84 points.

The junior men’s title will be decided on Sunday evening.