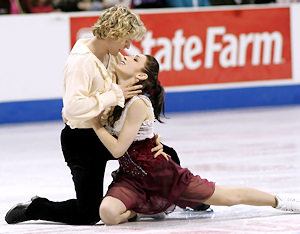 Meryl Davis and Charlie White perform to music from The Phantom of the Opera at the 2010 AT&T U.S. National Figure Skating Championships.

Meryl Davis and Charlie White ignited the audience with an electrifying free dance to music from The Phantom of the Opera to win their second consecutive U.S. Championships here in Spokane.  The champions’ program was so intricate that something technically or aesthetically beautiful could have been missed with the blink of an eye.

“After we finished our free dance at Worlds last year, it was the most amazing feeling that we’ve had,” Davis shared after the competition.  “We were content with putting out an amazing program that we worked so hard and trained so well for, and we felt that tonight, so it was just an amazing experience.”

Davis and White now head to the Olympic Games as the top U.S. team, and are now heavy favorites to come home with a medal from Vancouver.

“It’s something that we really haven’t allowed ourselves to accept until maybe this point,” Davis admitted.  “It hasn’t quite sunk in yet.”

White added, “It’s important in your home country to come out on top, especially going into the Olympics or Worlds.  Internationally, the reputation that comes along with it is very important, and what we are trying to do at the Olympics is win.  So we want every bit that can help us.”

The champions cleaned up with their program component scores, earning middle to high nines for each component, and even logged a perfect ten from one of the judges for interpretation and timing.  Their competition score of 222.29 points is the highest scored at the U.S. Championships since the new judging system was implemented in 2006.

“We felt like we were able to put together all of the technical elements and the emotional elements that make that program so special,” White said.  “It was a great crowd, and it was very emotional so we are proud of what we did.”

Finishing with the silver medals are Tanith Belbin and Benjamin Agosto, their lowest finish at the U.S. Championships since 2003.  The five time champions looked well prepared for the Olympic Games with their Ave Maria/Amen program, but could not keep pace with the technical mastery that Davis and White demonstrated.

“We were running high on emotions tonight,” Belbin admitted.  “I think that we were trying to put aside in our minds that this is going to be what we expected to be at our last U.S. Nationals.  When the music stopped, it hit us how great it is to have such a great performance as a send off.  We’re just so thrilled to perform as well as we did leading up to the Olympics.”

The silver medalists skated with passion throughout their program, and showcased increased difficulty in their lifts this season.  Belbin and Agosto were pleased with their performance overall, but plan to get back to work right away in preparation of the Olympic Games.  Their competition total of 218.51 points is their highest ever at the U.S. Championships, and second only to their personal best from the 2005 World Championships.

“We definitely want to work on the power and speed of the program,” Belbin said of their progression towards Vancouver.  “The goal here at nationals was to make sure that we keep the emotional level high.  It takes longer to develop and takes a lot of courage to put out there, which I think everyone here did out there today.  It will be a lot more pressure-filled at the Olympics, so we definitely feel like we achieved this step in our developmental process.  Now we go home and just work on general speed and power.”

Emily Samuelson and Evan Bates held onto third place to win the bronze medal in their third season on the championship level.  The duo now has won every color of medal at this level save for the gold.  Samuelson and Bates were ecstatic at the end of their Canto Della Terra program, and were overcome with emotion as their scores were revealed.

“We went out with the mindset that we needed to do everything in our program the way we do it in practice,” Samuelson said after she regained her composure.  “We felt like we gave a great performance, and the emotions kind of took over in the end which was incredible.”

Samuelson and Bates were smooth throughout their dance, and have really improved their connection between each other in their programs.  Their total of 190.69 points is a new personal best for the bronze medalists, and at press time, they were eagerly awaiting to find out if they will be named to the Olympic Team.

“We’ve progressed a lot quicker that we thought we may have, and success has come.  Now that we may have made the team, given that we weren’t part of any of the Olympic summits, the word Olympics is kind of an abstract term.  It means a lot to a lot of people, but to us it’s something that we have talked about with friends and family.  Not that the dream is hopefully realized, and I know that it is cliché to say that we are totally speechless.  It’s just hard to find the right adjectives to explain how we feel.”

Finishing in fourth place with the pewter medals were Kimberly Navarro and Brent Bommentre, who have said that this will be their final appearance as competitors at the U.S. Championships.

“This is our last Nationals performance,” Navarro said after the program.  “Really it felt good.”

Navarro and Bommentre skated an inspiring program to One by U2 and Mary J. Blige that encapsulated their entire skating career in just four minutes.  The pewter medalists earned 186.42 points in the competition, but left some points on the table with two elements that were graded as level two.  However, they felt like they put all of the emotion that they could muster up into their program today.

“I think that when we look back on that, we can say that we left everything out there,” Bommentre said with accomplishment. “As competitors, that’s all you can ask. This has been a really fun partnership, and that program was a great expression of it.”

Navarro and Bommentre were upbeat even in the face of the possibility of not being named to the Olympic Team, and are hopeful for the future.

“The sun will come out tomorrow,” Bommentre said.  “It’s out of our control now, and it is what it is.  If we hadn’t skated the way we did, or we were a little cautious, we might have had those ‘what ifs’.”

Navarro continued, “I don’t want competitive skating to have the last say in my career, and I think that it will be fun to skate in an environment that is just about performances.  I think that Brent is game for that as well, so that’s where I would like to go.  I also will probably eat a lot of doughnuts.”

Madison Chock and Greg Zuerlein finished in fifth place in their debut on the Championship level, while Madison Hubbell and Keiffer Hubbell finished in sixth after winning the pewter medals last season.