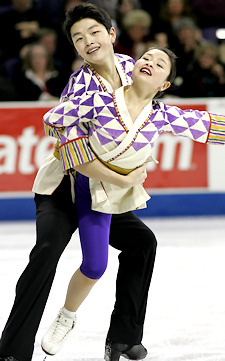 World Junior silver medalists Maia Shibutani and Alex Shibutani increased their lead over the rest of the junior dance field after a fantastic original dance to Japanese Kodo Drums music.  The dance was highlighted by a daring rotational lift at the end of the program in which  Maia is upside down and perpendicular to the ice that stamped an explanation on the program.

“There’s always room for improvement, but it was a great second day of competition,” Maia said.  “We’re looking forward to (the free dance), and the crowd was great.”

Older brother Alex agreed.  “The energy out there was fantastic.  I think that all of the skaters capitalized on that.  We felt really good out there, and we’re happy with how things turned out.”

The siblings were pleased with the quality of their performance, but were disappointed with the levels that they received for three of the four elements in the program.

“Levels are more difficult to earn than they were last year,” Alex observed.  “It is pushing the athletes to work harder and attain a higher level of difficulty.  As for our levels, I think that we did a really good job overall, and we’ll just continue to practice to get better.  The (Technical) callers know their stuff, and I think that we prefer them to be tougher on us than for them to just give us the levels.”

The Shibutanis earned a total of 56.17 points for their efforts in the original dance, and have amassed a total of 91.89 points heading into the free dance.

Rachel Tibbetts and Collin Brubaker finished in third place in the original dance, but remained in second place overall on the strength of their compulsory dance score.  Their sweeping interpretation of Eva Cassidy’s Tennessee Waltz earned the duo 49.24 points, and they have 83.00 points heading into the free dance.

“We skated well, and performed our best,” Tibbetts said somberly.

“Anytime you stay on your feet and stay healthy in a competition, it’s good,” Brubaker added.

Like the leaders, Tibbetts and Brubaker struggled with earning high levels on their elements, but were fine with their performance and placement nevertheless.

“We know what we didn’t get our levels on,” Brubaker admitted after his skate.  “Some of those elements were shaky, but we all practice our elements over and over so that we get the levels that we want.  It comes down to doing it when you compete.  You can’t go back and do them over in competition, so you learn how you can improve and move on.”

Last year’s bronze medalists Piper Gilles and Zachary Donohue moved up to third place after a new original dance to the music of John Denver.

“We received feedback that we needed to change our original dance after we competed on the Junior Grand Prix in the fall,” Donohue explained.  “Our choreographer said that this was the only rhythm that he could see us doing, and even though it was only our second performance, it went well.”

The Michigan-trained duo earned 51.04 points for their Western folk dance, and are less than two behind points Tibbetts and Brubaker with 81.85 points.  Gilles is motivated to finish strong in this competition to increase her team’s chances of competing at the World Junior Championships.

“I’ve been an alternate for the last three seasons,” said the motivated Gilles.  “I have extra incentive to earn a trip to The Hague as I have family there that I have never met.  It would be nice to be able to meet them and compete in the Junior Worlds.

Isabella Cannuscio and Ian Lorello slipped one spot after the original dance and are now in fourth place overall. Their Russian folk original dance was the fourth best of the night, and the duo has a cumulative total of 78.59 points.

Anastasia Olson and Jordan Cowan moved up to fifth place after an eighth place finish in the compulsory dance, and lead sixth place finishers Lauri Boncorsi and Travis Mager by .06 points heading into the free dance.

The junior dance medalists will be decided on Thursday afternoon.