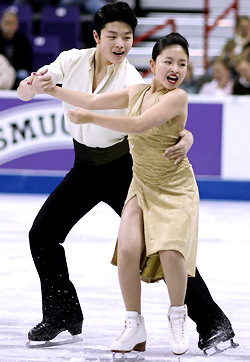 Maia Shibutani (SC of New York Inc) and Alex Shibutani (Arctic FSC) took the lead in the junior compulsory dance in Spokane tonight with 35.72 points, outdistancing their closest competitors by a little less than two points.

“It was a great start for us,” said Alex of their skating.  “Nationals is kind of a different animal, especially when it’s in Spokane with so many people watching the compulsories.  It’s a great environment for us to compete in out there.”

The competitors were asked to skate the Argentine Tango, and the sibling team performed with technical precision and their typical flair.

Both Maia and Alex were pleased with their performance, and admitted to having some pre-competition nerves.

“There’s always some nerves out there,” Alex admitted.  “It’s just the two of us out there, so it can get overwhelming.”

Finishing in second place was Rachel Tibbetts (Broadmoor SC)   and Colin Brubaker (All Year FSC), who are in their third season competing on the junior level.  Their compulsory dance total was 33.78 points.

Tibbetts and Brubaker looked strong throughout their program, and even scored higher than the leaders on one of the six executed elements in the program.

“In the past couple of years we’ve always had one big mistake in competitions,” Brubaker said after the program.  “We’ve taken a different mind set towards our training and competitions to try to learn from our bad experiences so that we can have more good ones.”

“I felt very solid out there, and it was one of our better run-throughs of the tango,” Cannuscio said.  “I think it went well.”

Cannuscio and Lorello were instructed by their coach Karen Ludington to attack the “and one” portion of the dance, and they were happy to be able to live up to her expectations in their first time competing this dance.

“I just want give that extra one hundred and twenty percent out there,” Lorello said.  “Skating our best is the most important goal for us.”

In the Novice division, Danvi Pham and   Vu Pham (Washington FSC) are currently first after the compulsory dances with 49.60 points.

“I’m happy and excited,” said Danvi. “I wonder how I will do on the free dance.”

“Our performances today were really good,” added Vu. “My favorite compulsory is the Starlight (Waltz) but we did better on the Kilian today.”

“We have a South American style folk tale for our free dance from Ghost Dancers,” added Vu. “She’s the ghost and I am a really poor guy on the verge of death.  She has to fight death, but we both end up dying.”

Joylyn Yang and   Jean-Luc Baker (Seattle SC) are in second with 48.22 points, followed closely by Alexandra Aldridge and   Daniel Eaton (Detroit SC), who have 47.75 points.

Leah Keiser (All Year FSC) won the title in the Ladies discipline with 136.66 points.

“This is my first year at novice coming to real nationals with all of the audience support and from my friends at home,” said Keiser, who landed five triples in her Carmen routine.

“I am very happy because this was my goal at Nationals to get all of these high-point jumps in my program,” Keiser later told the press. “I worked really hard on the character of the program, and I feel like I mastered that.  We looked up a lot of other skaters who previously skated to Carmen, and I saw how much emotion they put into their skating.  My favorite was probably Katarina Witt.”

Ashley Cain (Stars FSC of Texas), who won the pairs title, took the silver with 133.95 points.

“It’s amazing to be here and do both pairs and singles and medal in them,” said Cain. “I felt like I skated my best. It was the first time that I put a triple loop in my program, and I am happy that I skated so well.”

“This performance was my favorite of the week for me,” she added. “I haven’t done a clean freeskate at the last two competitions, so it was really important for me to do a clean skate here.”

“It feels really great to get a medal, especially after how hard it was for me this year,” said Kulgeyko. “It’s great to win, but it’s even better that you try hard.”

“It was a hard year because I had to change the technique that I had with my previous coach,” Kulgeyko explained. “I’m more mature now. I really like this program because it has good components and I can express the character well.”