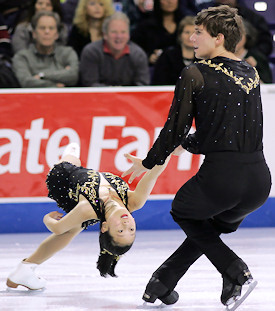 Felicia Zhang (SC of New York) and Taylor Toth (University of Delaware FSC) almost didn’t skate in the Junior Pairs short program tonight, but instead, came away with the lead after a scary warm up before the competition.

“All I know is we were going into a back press, and the next thing I remember is being on the ice,” Toth explained.

What Toth didn’t realize is that another team, Gretchen Donlan and Andrew Speroff, collided with him causing the 21-year-old to crash to the ice hitting his head.

“We started out our practice with our fall,” the 16-year-old Zhang explained.  “Taylor had to get five stitches, and the team doctor recommended that we didn’t skate.  The decision was up to Taylor, and he decided to compete.”

And compete they did.  The leaders nailed each one of the elements in their Rondò Veneziano program with ease, and sealed the victory with a great throw triple Salchow.  Their total of 57.16 points would have put them in fifth place on the championship level in yesterday’s short program.

“Felicia is a really great singles skater,” Toth admitted.  “We are trying two throw triples in our freeskate, and we are also going to do side-by-side triple toes as well.”

Sitting in second place are Britney Simpson and Nathan Miller (Broadmoor SC) after a crowd-pleasing program to Asian Fusion music.

“We just got back from the Junior Grand Prix Final a few weeks ago,” Miller explained. “We kind of left all of our nerves back there, so today we were able to come here and focus on performing our program.”

Simpson, 13, and Miller, 21, did make two mistakes in their program – struggling on their death spiral, as well as a slight two-footed landing on the throw triple Salchow.

“Competing on the Junior Grand Prix definitely helped us in our preparations,” Simpson said.  “It taught me to calm down my breathing and let me get my feet under me in our program.”

The home schooled eighth grader and her restaurant sous chef partner are less than one point behind the leaders with 56.74 points.

Finishing in third place is the new team of Carolyn-Ann Alba (All Year FSC) and Christopher Knierim (Broadmoor SC) who skated an elegant program to music from the soundtrack of Summer of ’42.

Alba, 16, and Knierim, 22, opened strong, but quickly came down to earth in their Nationals debut with a poor landing on their throw triple Salchow.

“We skated well except for the problem with the throw triple,” Knierim said.  “It’s the first time we put it in our program.”

Smith, 20, and Bartholomay, 20, skated well in their “Punch Drunk” program save for a hard fall on a throw triple Salchow attempt that drew gasps from the crowd.

“I thought she hit her head,” Bartholomay said,  “and I was concerned that she was going to be hurt.”

But Smith toughed it out to finish the program, and ended up with her team in contention for a medal by earning 49.56 points.

“We’re pretty happy with our performance,” said the Korean-born Smith. “We’ve worked really hard to get where we are.”

Finishing in fifth place were Donlan (SC of Boston) and Speroff (Broadmoor SC), while Brittney Chase (Broadmoor SC) and Grant Marron (Coyotes SC of Arizona) were in sixth.