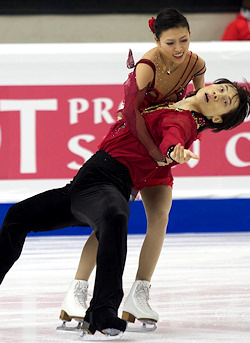 Pang and Tong, who skated last, were not flawless (Pang doubled her triple toeloop), but their performance to The Impossible Dream from “The Man of La Mancha” was charged with energy and joy. The skaters were so expressive that the mistake, barely noticeable to the untrained eye, did not mar the overall impression of the program – especially since they nailed all other elements.

“We are very happy to be back here in this place (Torino) and to have won our second world title here. The audience was very supportive and helped us to perform as well as we did,” said Tong afterwards.

“There was one mistake,” admitted Pang. “I wasn’t nervous, I was just thinking too much. The level of the competition was very high.”

The experienced duo remain uncertain about their future. “We’ll probably return home and have a rest and then skate in some shows. We have not made our decision yet.”

Savchenko and Szolkowy were once again unable to produce a clean performance. The students of Ingo Steuer made a mistake on their opening element  and a sequence of two side-by-side triple toes and in which Savchenko doubled the first jump. However, the Germans landed double Axels and two throws later in the program.

“Too bad for the first toeloop,” said Savchenko. “There was nothing I could do. The performance felt beautiful and the audience supported us so much. It felt so good to skate tonight, this feeling you have rarely. It’s a shame because of the Short Program. I think that’s where we lost it.”

Despite the mistake, the defending champions earned  the second highest technical score of the night due to the higher levels of difficulty, and their ability to deliver intricate choreography earned them  135.22   (65.86/69.36) for a second place finish in the long and overall  (204.74).

“We feel better tonight,” said Szolkowy afterwards. “We are happy that our long program was the way we skated it. We wanted to show the elements. There was a little, little mistake. It has been a long season, a hard season. There were good programs and bad programs and it is important to finish with a good program.”

“We are taking a lot of experience with us from this season – how to overcome all these ups and downs,” elaborated Szolkowy. “It is not easy to start the competition each time, especially not if you had two, three successful years as we had, coming to competition and almost every time winning. The experience we got is important for us as a couple – as athletes and as human beings.”

The 2010 Olympic bronze medalists plan to compete until the Olympic Games in Sochi in 2014.

Kavaguti and Smirnov decided to stick with a familiar routine at this event. In Vancouver,  their last minute decision  to replace the quad throw  with a triple seemed to throw off their entire game plan. Unfortunately in Turin, it did not work out. Kavaguti fell out of the quad throw landing and later crashed on a second throw triple loop. However, the Russian Champions land their side-by-side jumps and got into the spirit of their waltz routine, delighting the audience with their upbeat and charming interpretation. They received 130.67  (65.39/67.28) for third place in the long and overall (203.79).

“We are happy with our result,” said Kavaguti afterwards. “There was a mistake, but we are satisfied with our skating. It was risky to try the quad throw Salchow after not going for it in Vancouver but we challenged, we took that risk: we missed it but we are satisfied of our performance.”

“I didn’t have problems (because of the falls),” she continued. “I just keep skating and go on. It has been not so nice to be the opening couple in the last group, but we made a good performance. We got on the podium and we are so happy for that.”

The Russians also plan to continue their career. “We will continue working harder, with even more enthusiasm, but we won’t tell you all our plans,” said Smirnov. “We’ll see you in the next year, you can come and see by yourself.”

Teammates Maria Mukhortova and Maxim Trankov opened their “Love Story” routine with a strong triple twist and nice side-by-side triple Salchows, but Mukhortova later had a shaky landing on her triple toeloop and was only able to tack a single toe at the end of it. The team also made an unexpected mistake on a throw triple Salchow as Trankov almost fell after launching his partner in the air.

“My legs were tired,” Trankov later explained, “so I sat on them and stumbled a little. It’s sad because we lost time on that and had to think over the rest of the program… change something right away, not just skate automatically.”

Compared to their performance in the short program, Mukhortova and Trankov were much more relaxed and comfortable on the ice, showing some genuine emotions and connection between them. They received 127.91 (62.75/66.16) for a fourth place finish in the long and overall (197.39).

“We are a little disappointed because we made a few stupid mistakes,” admitted Trankov. “But this is the last competition of the season, and we started it very early – in August, so we are tired. Today it was easier to skate. I felt more relaxed than before the short.”

“I am glad for the triple Salchow,” added Mukhortova, “because it used to be a problem for me this season, but this time it went well.”

Dan Zhang and Hao Zhang of China seemed to be well on the road to recovering their former shape as they skated a clean, even if slightly flawed, program to Sheherezade. The team was way out of synch on their side-by-side jumps, but the difficulty of their jumping content was unmatched as they landed a double Axel-triple toe loop combination and triple Salchows.

The Four Continents Champions also produced their traditionally strong twist and throws to get the highest technical score of the night, however, the quality of their skating and relative lack of attention to choreographic details prevented them from challenging the higher ranked couples. They placed fifth in the long 126.58 (66.82/59.76) points and and overall (195.78).

“We are very satisfied with the result,” said Dan Zhang. “This has been a very difficult season because of the Olympic Games, but we are happy about the performances of yesterday and today. This is our personal best; we will try to improve, but it is too soon to think about the next Olympic Games.”

“We are very happy because in the last performances we always made  mistakes,” added Hao Zhang. “For example, at the Olympics I made a mistake at the beginning. Furthermore, today I don’t feel good. I have a very serious injury at the back and I am wearing a bandage, but fortunately we did well.”

Jessica Dubé and Bryce Davison pulled up to sixth place overall with a strong performance, despite two major mistakes. Dubé doubled her triple Salchow, and the team’s last spin was not counted. Otherwise, the Canadian Champions were clean and their  routine to The Way We Were was among the most intricate and inspirational of the evening. They placed sixth in the long with  117.71 (57.63/60.08) points and overall with  177.07 points.

“After yesterday we decided to put everything that happened this year and yesterday behind us and just go out today and show what we can do and give everyone a good performance,” said Dubé afterwards. “That’s what we’ve done and we’re pretty happy about it. It keeps us more positive for the future.”

“We’re going to be skating of course,” responded Davison when asked about the future. “Besides that we’re not really too sure. I think we’re going to keep the long and change the short, but we don’t really know. We have to get more consistent with our technical elements to avoid being hesitant during the program.”

USA’s Caydee Denney and Jeremy Barrett finished seven overall despite Caydee’s mistake on a triple toeloop. Otherwise they were fast, powerful and attacked all elements. They posted a new seasonal best of 111.95 for eighth place in the long, and finished seventh overall with  172.47 points.

“This is the first time for me to make such a mistake in competition,” said Barrett of his fall on the triple toeloop. “I just kept going and completed the whole program. Overall it has been a good competition for us.”

“It has been a good experience,” added Denney. “We have to improve every time we go on the ice.”

Vera Bazarova and Yuri Larionov finished eighth overall (172.04) after Bazarova fell on her double Axel. The The Russian bronze medalists earned good Grades of Execution (GOE) on most of the elements, including a level two triple twist, however, despite their nice line and soft basic skating skills, their performance to Seven Years in Tibet lacked the presence and power of their rivals.

“It was not perfect, and I can’t really explain [the fall on the double Axel],” said Bazarova. “We were ready for the competition. I can’t say that this is because we are tired at the end of the season, because sometimes it is even easier to skate when you are on the edge. For example, in the beginning of this season, our performances were not confident at all, but with each start it would become easier. Today, only the last throw jump was a pleasure. It troubled us before, but now it came out nicely. But in general it was good.”

“With every competition we are getting more experience,” added Larionov. “It was a hard season, we had many big events, and all of them were debuts. So it will help us in the future, give us confidence. We will have a little rest and then start to learn new elements, think of the new programs, and costumes.”

USA’s Amanda Evora and Mark Ladwig once again struggled with side-by-side jumps, but performed all other elements well to receive 165.96 points overall to finish in the ninth place.

“We made a few mistakes, but nothing horrible,” observed Ladwig. “I mean for us to be on the World Championship, we actually felt more “butterflies”  here than at the Olympics because I had the expectations to help my country to get three spots for the next Championships. We had to skate even better.”

“Gosh, this season was amazing!” exclaimed Evora. “I mean our first world caliber competition was the Olympic Games, and then come to the Worlds… we were so nervous and excited about it, because it was our first Worlds. It was nice because we still beat our personal best of the season by eight points, but at the same time we had higher expectations. As for me, I am disappointed in my jump (fall on double Axel). At the same time we met some goals and still have room for improvement.”

Anabelle Langlois and  Cody Hay rounded up the top ten.