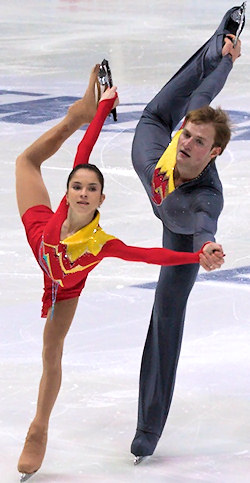 Vera Bazarova and Yuri Larionov performed to music from Seven Years in Tibet and Tale of Wandering for their long program this past season.

Russian pair skaters Vera Bazarova and Yuri Larionov have proven that it takes a lot of work and support in order to remain an elite team. Their partnership survived a very tough time when Larionov was suspended for an anti-doping violation for 18 months (January 2008 to July 2009). This past season, 17-year-old Bazarova and 23-year-old Larionov celebrated a successful comeback and won the bronze medal at Russian Nationals. They went on to debut at the European Championships, where they placed fifth, competed at the Olympic Games (11th), and finished off the season with a ninth place finish at the World Championships.

Bazarova and Larionov were a strong junior team during the the 2007-08 season. They had just won the title at the Junior Grand Prix Final in December 2007, and were considered top contenders for Junior Worlds as they had already claimed the silver medal at the 2007 Junior Worlds.

At the end of of November 2007, Larionov was subject to an out-of-competition anti-doping test, conducted in his hometown of Perm. Shortly after the couple returned from Russian Nationals in January 2008, they learned that his sample had tested positive for Furosemide. Furosemide – a diuretic, is on the list of prohibited substances as athletes use it as a masking agent for drugs such as anabolic steroids.

Larionov received a letter from the ISU that informed him about the positive test. It was a shock for him and his partner. “It came completely unexpected,” recalled Bazarova. “We were preparing for Junior Nationals.” “Yes,” added Larionov, “and we wanted to go to Junior Worlds afterwards.” Obviously, neither Junior Nationals nor Junior Worlds happened for them. Instead, they had to return their gold medals from the Junior Final, and the ISU notified Larionov in April about the two-year-ban that automatically came with the use of diuretics at that time.

“In the beginning, it was very hard,” recalled Larionov, who claimed that he took the medication to fight a headache, not knowing that it contained a prohibited substance. “It was hard to realize that this had happened. It was difficult for me to look the others into the eyes. Then we sat down together and talked everything through. We said to each other, let’s forget about that, we still have everything ahead of us, it still can work out for us. We just have to move on, that’s it.” The pair skater was lucky that Bazarova decided to stay with him. “There were offers from others, but I said right away that I’m not going to skate with someone else,” the delicate Bazarova said firmly.

Bazarova and Larionov couldn’t compete but they trained at home in Perm with long-time coach Liudmila Kalinina. “A lot of people from the Russian Figure Skating Federation and president Valentin Piseev were very supportive,” noted Bazarova. In spring 2009, the ISU had good news for the couple. Following a change in the anti-doping rules, the ban was cut short from two years to 18 months, enabling the Russians to start competing in the 2009-10 season. “I am really grateful to everyone who helped and supported us during this difficult time,” Larionov offered. “Most of all, I thank my coach and my partner because they waited for me and didn’t pay attention to what had happened.”

The skaters and coach Kalinina were very nervous entering the Cup of Russia in Moscow – their first international competition after the ban, but they did really well, placing fourth. Bazarova has stabilized the side-by-side triple toe – a jump she wasn’t able to do as a junior. The Cup of Russia became the starting point for a strong season for the team.

Unlike most of the other Russian top skaters, Bazarova and Larionov come from Moscow or St. Petersburg, nor train in one of these two cities. Bazarova started skating as a three-year-old in her native Ekaterinburg. “I didn’t have great results in singles, and when I was 12 years old, Liudmila Alexandrovna (Kalinina) invited me to come to Perm,” she explained. Bazarova moved to Perm together with her mother first, but now is living on her own. Apart from a brief pairing with a boy in Ekaterinburg, Bazarova didn’t have much experience in pair skating before teaming up with Larionov.

Larionov has a more extensive skating biography. Born in Novosibirsk in Siberia, he moved with his family to Tashkent in Uzbekistan as a child as his father was serving in the Russian Army there. Larionov started skating in Tashkent. “I went to the kindergarten and I was coughing a lot and had a sore throat. My mother decided to put me into skating, but my father was totally against it,” he recalled. “I was quite chubby as a child, and my father said that they wouldn’t take me anyway.” But they did. Larionov’s mother waited until her husband left for a business trip and then took her son to the ice rink. He enjoyed skating right away and after a while his father agreed with his sport. “When we moved to Novosibirsk, the first thing my dad found out was where the next ice rink is,” Larionov smiled.

Larionov later went to Moscow for four years and skated there, but without much success, before going to Perm. “I had an injury and I even thought about retiring,” the athlete admitted. “My coaches suggested that I should skate in Perm. I thought I can try it. I went there and I wanted to prove that I’m able to achieve something,” he continued. One year later, in spring 2005, Kalinina teamed him up with Bazarova.

“At the beginning it was hard, obviously. We are two different people and we didn’t know each other yet,” Larionov explained. “Slowly, step by step, day by day we got to know each other and we got used to each other. This is hard work as well, but the most important thing is not to give up but to go forward.” The new partnership worked well. “We competed at a national event and were third right away,” Bazarova noted. They started to compete internationally in the next season, 2006-07 and qualified for the Junior Final right away.

Bazarova and Larionov both look up to Elena Berezhnaya Anton Sikharulidze. “They are my favorite couple. I really liked them and I think they were very impressive when you look at their elements and their skating in general,” Bazarova commented. “They were inspiring,” agreed Larionov. “You were looking at them and your soul is touched instantly and you feel the emotions.”

The Russians are a couple off the ice as well and have no problems separating training and private life. They quarrel rarely. “Obviously sometimes there is something, but you just have to move on. We are saying – ‘don’t do that again, let’s forget about it and continue as if nothing had happened’. Ice is ice and life is life,” Larionov said.

Bazarova started her studies at the pedagogical sports institute in 2009, while Larionov just finished this year. In their spare time, they like going out and cooking. She describes him as “strong, confident and reliable,” while he describes her as “strong, smart and persistent”.

For the upcoming season, the couple wants to confirm their good results and they are eying the international podiums at the Grand Prix and the European Championships. They have been selected for the first and the last Grand Prix, the NHK Trophy in October and the Trophée Bompard in November.