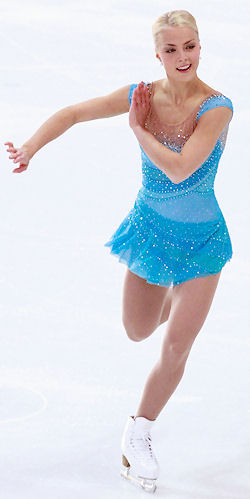 Kiira Korpi of Finland performs to Somewhere Over the Rainbow at the 2010 Nebelhorn Trophy.

Kiira Korpi of Finland skated to the lead in the Ladies Short Program Friday at the Nebelhorn Trophy. With 58.45 points, she got a lead of seven points over USA’s Melissa Bulanhagui (51.20 points). Joshi Helgesson of Sweden came in third at 48.16, just two points ahead of her older sister Viktoria.

Korpi debuted her new short program to Somewhere Over the Rainbow, choreographed by Shae-Lynn Bourne. The exquisite performance included a triple loop, a double Axel and beautiful spins. The flying sit spin was a level three and the combination spin a level four. However, the Finn doubled the first toe in her planned combination, but still added the second triple toe.

“I have the triple-triple in both programs now, but unfortunately it didn’t go well today,” Korpi said. “It is a shame because I worked well in practice.”

Korpi added that her summer training in Toronto, Finland and Switzerland went well and that no injuries and illnesses bothered her.

Bulanhagui opened her program to a modern Tango with a triple Lutz-double loop combination followed by a excellent level-four layback spin. The triple Salchow was a little shaky, but the American nailed a strong double Axel as the last element of her short program. This is no surprise as Bulanhagui has been practicing the triple Axel, though she is not planning to include it in tomorrow’s long program. “It has to be really solid,” the skater said.

Skating to one of the many popular modernized versions of Georg Haendel’s Sarabande, Joshi Helgesson landed a triple Lutz-double toe and the double Axel, but fell on the triple loop that was under-rotated. The tall Swedish skater picked up points for her two level-four spins and the solid double Axel.

“The loop has been good in practice, I don’t know why I missed it today,” Josh explained. “The jump felt good in the air, but slow on the landing.”

Sister and teammate Viktoria Helgesson went down on her opening triple flip, but completed a triple loop- double toe combination as well as double Axel. She got a level four for the combination spin and the flying sit spin.

It is the first competition, but I still don’t feel too good about my program,” Viktoria said. “My practice before coming here was very good and I’m disappointed about my fall.”

The sisters pointed out that they are best friends and support each other in spite of competing against each other.

“We help each other, but of course each of us wants to win,” Viktoria admitted. They watch each other perform if they have time. “I’m actually more nervous when she skates,” Joshi revealed.

Italian Francesca Rio came in fifth with 44.23 points. She singled the Axel but held on to her triple Lutz-double toe combo.

Diane Szmiett of Canada scored 43.12 points and is currently ranked sixth. She under-rotated the triple flip and touched down with her hand. For her combination, she opted for a triple toe-double toe.