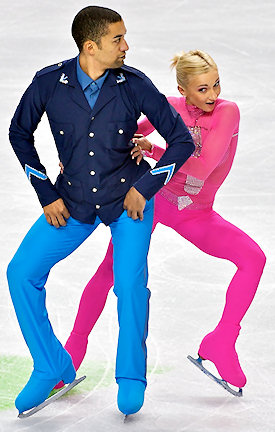 After avoiding a close call in the short program, Germans Aljona Savchenko and Robin Szolkowy made it clear that the Skate America title belonged to them after earning the highest score of the season thus far. Their Pink Panther freeskate was the highlight of the competition, and propelled them to their eighth career Grand Prix title.

“Tonight we feel better about this long program, and to begin the season like this was great,” Szolkowy explained after the awards ceremony. “There are still a lot of points that we can get on elements if we skate clean, but now we know what we have to work on for our next competition in two weeks.”

From the opening playful choreography to their closing throw triple Salchow, Savchenko and Szolkowy skated this program as if they had been skating it for years. With the exception of a small bobble on a triple toe loop-triple toe loop sequence, each element in the program was first rate, earning the Olympic bronze medalists the gold medal by more than twenty-two points.

“We searched for a new program for a long time, and there was a lot of thought put into it,” Savchenko said of their music selection. “Finally one day I said, ‘What about Pink Panther?’ It is something new and we are very excited to skate it.”

The program, which earned 133.71 points, gave the Germans a competition total of 197.70, easily defeating the silver medalists Kirsten Moore-Towers and Dylan Moscovitch from Canada.

The Canadians had a great competition in their own right, and finished with a new personal best of 175.48 points. Though Moore-Towers and Moscovitch are only in their sophomore season together as a team, their results have been impressive. With the silver medal, a trip to the Grand Prix Final is almost a given.

Though Moore-Towers and Moscovitch were pleased with the overall result, they were less so with their skating in their Les Miserables program.

“We always want to come out and skate our best results aside,” Moscovitch said. “Like Kirsten said, we fought until the end, and we’re happy we did everything to keep the program as solid as it was.”

Finishing in third place with their second Grand Prix medal were Wenjing Sui and Cong Han from China. The charismatic team attempted a throw quadruple Salchow, and used their trademark perkiness to overtake a strong challenge from U.S. Champions Caydee Denney and Jeremy Barrett.

“We have only trained the quad throw for less than one year, and our coach allows us to practice it just fifteen minutes a day,” Hong explained. “But we feel ready to do it, and so we just tried.”

Sui and Han are in a strange position now as they wait to see if they have earned enough points to qualify for the Grand Prix Final after already earning a trip to the Final on the junior level.

“We don’t know if we have qualified yet, so we haven’t decided which competition we will do,” Cong said. “Our coach will decide for us if the opportunity should come up.”

Denney and Barrett redeemed themselves from a dismal showing at the NHK Trophy, scoring more than ten points higher than they did in Nogoya. Though they were in third place after the short program, they slipped to fourth place overall after an uneven performance in their Rhapsody in Blue program.

“It was a little disappointing because we have been skating in practice a lot better,” Barrett admitted. “At this level you can’t really make mistakes if you want to make the podium. Now we have time to go home and work on things with our new coaches, and it will be good to go home and do some work before U.S. Nationals.”