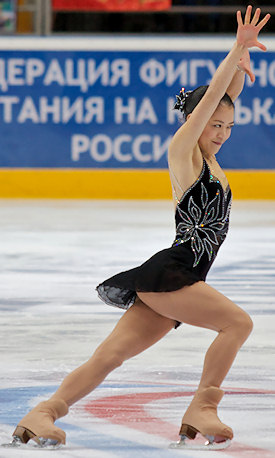 Akiko Suzuki of Japan performs to Tango Jalousie in the Short Program at Cup of Russia.

Debutants prevailed over more experienced skaters at the Ladies Short Program in Moscow. The only favorite to skate a clean program (minus an edge call on her Lutz, which cost her 1.20 points in the quality of execution) was Akiko Suzuki from Japan.

Skating last out of ten participant, the student of Hiroshi Naga was inspired and confident in her performance to the famous Tango Jalousie, which allowed her to secure the highest program components scores of the night.

Suzuki failed to beat her season’s best from the previous event (57.43), but it was enough to edge out USA’s Agnes Zawadzki for the overnight leadership.

“It was not a perfect short program but it was good enough,” Suzuki said. “My jumps here were better than at the Cup of China, but I feel that my spins and other things were better in Beijing. It is my first time in Russia and I am very happy to perform at such a wonderful venue. I am looking forward to the free program tomorrow.”

Zawadzki, for whom it is only the third international event of her career, skated second and did not allow her lack of experience affect her confidence. She nailed her triple toe loop – triple toe loop combination and went on to land a triple Lutz out of steps, picking up levels four for her spins along the way. The student of Tom Zakrajsek received the highest technical score of the night with her well-choreographed routine to Gopher Mambo.

“My levels weren’t as good as in Skate Canada, but my presentation was and I was pretty happy about that because I’ve been working on it,” said the American.

Zawadzki improved her personal best a bit (to 56.84 from 56.29 she has posted at Skate Canada) and now has an excellent chance to compete for a Grand Prix event’s gold medal. When asked if she has any secret to help her perform as well in the long program as she did in the short, she replied: “I guess it’s just training and training. When you train well you are prepared for every competition. That, I guess is my secret.”

Her more experienced teammate Ashley Wagner, who is currently third with 56.17 points, thanked the 16-year-old for revealing the secret to her, but lamented that it would be hard for her to implement it as there is only one practice left before the free skate. The student of Priscilla Hill, however, agreed with it: “You do what you’re doing every day. Judging from my previous performances, I haven’t mastered that yet, but I’m working towards it.”

The most recent breakthrough in this process is a triple-triple combination. Wagner attempted a more difficult flip – toe loop, but two-footed the landing of the second jump. “I’m pretty pleased with how my performance went today,” she said. “I landed a triple-triple and that was my first time doing that combination in competition. The landings on my jumps were a little bit sticky, so I’ll just keep on working on the quality. But I have accomplished my main goal and it is great.”

The Japanese and two Americans are closely followed by a Russian – Grand Prix debutant Sofia Biryukova (54.99). Like Zawadzki, she lacks international exposure (she has only competed at one Junior Grand Prix event last year and two minor internationals earlier this fall), but the student of Viktoria Volchkova definitely has potential to become of the contenders for the place at the National team for the European and World Championships.

The 16-year-old opened her routine to Tosca with a clean triple toe loop – triple toe loop combination and triple loop out of steps and earned good levels on her non-jumping elements. While the famous tune appears to be too heavy for her to handle at the moment, with more mileage and power it might become quite a convincing vehicle.

“It is a major competition,” Biryukova commented,” but I do not follow my rivals performances. At this event my concern is my own performance, not the placement. I am well prepared. I was confident and I skated well. Earlier in the season I tried a more difficult program with a triple Lutz – triple toe loop combination, but we have decided to settle on two toe loops for this event.”

Rounding up the final warm up group is the pre-event heavy favorite Miki Ando (54.00). The 2007 World Champion only performed a triple Lutz – double loop combination instead of an announced triple-triple, and received two painful blows from the technical panel: her triple flip was marked as underrotated and her layback spin was graded a level one. Overall it was enough to push her technical score down to the seventh place in a less than stellar field,however, the experienced competitor is still in contention for any color medal.

A successful comeback is less likely for two Russian skaters. Both Ksenia Makarova and Alena Leonova won medals at their previous Grand Prix events and both stood a chance of qualifying for the Grand Prix Final, but this chance is all but gone after their poor showings in the short program.

Makarova stepped out of her opening triple toe and was unable to perform a planned triple-triple combination, while Leonova fell on the opening triple Lutz and later popped a flip. They are currently eight (52.93) and ninth (46.61), respectively.