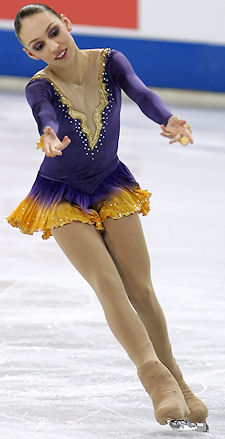 The junior ladies short program competition had to wait until the very last competitor to find its leader, as fifteen year-old Courtney Hicks from Chino Hills, Calif., skated twelfth in starting order and stole the show in Greensboro Monday night.

Hicks opened her program with a gorgeous triple flip-triple toe loop combination, while wearing one of Sasha Cohen’s hand-me-down costumes.

“(Coach) Mr. (John) Nicks didn’t like my original costume,” Hicks explained after her coach urged her to tell the true story of how she came to wear the dress. “Sasha went through her costumes and picked this one out for me.”

The similarities to Cohen do not end with Hicks’s choice of competition wear. The plucky high school student also used Andre Rieu’s Dark Eyes as her music, one of Cohen’s signature pieces.

“Sasha was kind of my inspiration for the program,” Hicks admitted. “When we were trying to figure out what music to skate to, this music came to mind.”

Hicks’ was understandably excited after her program, earning a total of 60.84 points, and her coach was equally proud of his young student.

“She’s very well prepared, and for the past few weeks, her run-throughs have been going very well to the point where she has been hitting her elements most of the time,” Nicks admitted. “Her percentages have been very good, and so her confidence has been growing. As we all know, the confident skater will be the best skater, and I think that you can see tonight that she had it.”

Finishing in second place with 53.08 points is Katarina Kulgeyko, a fourteen-year-old from San Diego, Calif.

“I’ve had a pretty rough season because I have had shin splints in my legs,” Kulgeyko explained of her excitement after receiving her scores. “I couldn’t really do my difficult elements until recently as I got over the injury. I’m happy I could skate like this.”

Kulgeyko opened her La Cumparsita short program with a nice triple flip-double toe combination and then a triple loop. High levels on her spins solidified her standing near the top of the leader board heading in to the Wednesday’s freeskate.

“I know that I can do a wee bit better, but it’s been a long day,” said the ambitious Kulgeyko. “I have a lot of triple jumps planned for the freeskate, so now I have to focus on that.”

“I felt really confident because I have been doing a lot of clean short programs in practice,” Dinh admitted. “I think that the music is a really fun piece to skate to, so when I skate to it I don’t really feel any pressure.”

Marley, the fifteen year-old who has recently teamed up with former US Pairs Champion Rockne Brubaker, made a slight error on her solo triple loop jump and finished with 50.55 points.