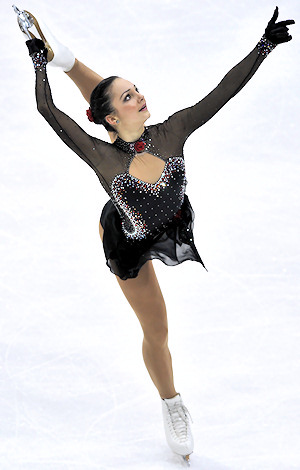 It was like a romance movie when Sarah Meier of Switzerland skated to the title on her home ice in Bern at the 2011 ISU European Figure Skating Championships. Carolina Kostner of Italy surged from sixth to claim the silver and Finland’s Kiira Korpi earned the bronze medal.

A lot of people needed tissues when the 26-year-old multiple Swiss Champion put out one of her best performances as the last skater in the Ladies event in what was her final competition.

Meier’s routine to Love in the Times of Cholera included five triple jumps, two double Axels, a level-four her flying camel spin, two level-three spins and level-three footwork. The crowd roared with each element she hit and the skater was overwhelmed with emotion in the last seconds of the program. It was the strongest performance technically, and Meier moved up from third to first with 170.60 points.

“I still can’t believe it,” Meier said. “I have always dreamed of this moment. It is just like I imagined it to be. It was very emotional. The atmosphere and the crowd was amazing. Because it was my last competition, it was even more emotional.”

“I was surprised that I was here (at the press conference) yesterday,” she continued, “and I am even more surprised to be here today. It’s unbelievable. It is the right moment to stop. It is the perfect ending. I want to enjoy every second as I know that this moment is never coming back. I will always remember this, but the world will go on.”

Kostner looked very elegant and fluid in her program set to L’aprés-midi d’un faun, and hit a double Axel-triple toe combo, as well as two triple Salchows and another double Axel. However, she stepped out of the triple flip (which she tried for the first time this season) and crashed on a triple loop while the other loop was underrotated. The Italian picked up a level four for two spins and jumped from sixth on to the podium with 168.54 points.

“Yesterday before I went to bed I looked at the situation in a very realistic way and I knew it was going to be hard,” Kostner shared. “So I focused less on the medals but on skating my best. It helped a lot.”

“I did wonderful practices before I came,” added the three-time European Champion offered, “and really good practices here. So I knew I was ready. I know it was just a matter of being focused. I’m very pleased and surprised with the result and so happy for Sarah (Meier). I’ve seen her struggling through a lot of injuries and I’ve felt the same moments of not skating well and coming back. Winning at home is a very special moment. It is, as she said, the perfect ending.”

Overnight leader Korpi seemed to feel the pressure and stepped out of her opening triple toe that was planned as a triple-triple, but the second jump never happened. The Finn then stumbled on the triple Lutz and took a painful looking fall on the triple loop.

“Maybe I was a little nervous before the performance,” Korpi later told the press. “It didn’t go well in the beginning and I fell badly on my hip. I got under pressure, but I fought until the end.”

The crowd started to encourage Korpi and she fought back – landing a triple Salchow, triple loop, and double Axel – all of them in combination with double toes (and a double loop in one case). Her not overly dramatic interpretation of  Evita was good. The 2007 European bronze medalist slipped to third but remained on the podium at 166.40 points.

“The program was quite a struggle,” Korpi admitted. “It didn’t start out well and I fell on the loop. But the crowd was very supportive. I fought until the end. I am happy with this medal even though I know I could have done better. I have come a long way since my last medal. Last year I was so close.”

The second Evita in the competition, Russia’s Ksenia Makarova, landed a triple flip and a triple Salchow-double toe, but her triple toe-triple toe was underrotated. She also fell on a double loop and singled another loop. The 18-year-old dropped from second to fourth at 162.04 points.

“I really liked the performance,” said Makarova. “Mistakes can happen. I didn’t get tired so I was really happy about that. I will definitely be representing Russia in the Worlds. There I hope to skate clean and with more emotion.”

Teammate Alena Leonova was a distant 13th in the short, but came back strong in the free skating. She pulled off a triple toe-triple toe and three more triples in her routine to Witches of Eastwick, but she put down her hand on the second flip and doubled the Salchow. With 154.31 points, Leonova moved up to fifth.

“Today I fulfilled the promise I gave to myself – to give a 100 percent, like I did at Russian Nationals (in the free skating),” said Leonova. “I’ve already forgotten about what happened yesterday and I focused on today. I felt cold yesterday and I didn’t feel my legs, plus I was nervous. Today I rubbed my legs with warming oil and I wore two pairs of tights.”

Viktoria Helgesson hit a triple Lutz and loop, but doubled other jumps to finish sixth (151.66 points).

“I didn’t feel any pressure starting in fourth place,” the strikingly blonde Swede commented. “I don’t know what went wrong. I was really pleased with the short program and the overall placement is better than last year. Overall I’m happy with my performance, but I could have done better. I learned a lot at this competition and I will do better next time.”

Ira Vannut from Belgium did well in her debut at Europeans and achieved the first top-ten finish in the Ladies event for her country in many years by coming in seventh. The 16-year-old hit produced two triple Lutzes, a triple flip, and two level-four spins and earned 150.66 points.

“My first goal was just to make it through qualifying and then I won!” she exclaimed. “I didn’t expect that. Then I had a really good short program and was 10th, and I hadn’t expected that either. I just had hoped to make the top 24. I learned that I shouldn’t be nervous and I was looking up to the other skaters that I’ve seen only on TV before.”