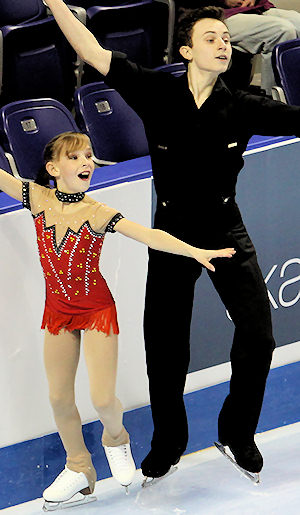 Overnight leaders Shalena Rau and Phelan Simpson (WO) did not look back during their Ragtime program that let their personalities shine through. Their only noticeable mistake was a step-out of their throw triple toe loop, but that was certainly forgivable after such a terrific opening triple twist.

The pair has a big height difference, which certainly helps them on lifts, but they still connect so well, both with each other and with the audience. Last year, Rau and Simpson won the bronze medal at this event and their goal was to win gold this year. Their total of 115.75 not only won gold, but it also made a statement that they will be a force to deal with in years to come.

Mary Orr and Anthony Furiano (WO) also opened their program with a beautiful triple twist. Their attempt at a throw triple flip was the only one in the event, and although it ended in a fall, the risk was probably worth it to build their experience with the big-ticket element.

Their Malaguena program was fiery, and like their training mates, they also reached their season goal—fight hard and medal at nationals. With 108.20 points and a second-place ranking in both programs, they easily secured the silver medal.

A third team from Western Ontario won bronze to complete the section’s sweep of the novice pairs podium. Leah Hyslop and Bob Goodwin looked shocked to see their names at the top of the standings after they skated. A freak fall on the death spiral hurt their points total, but the rest of their swing program was a delight. Their throw double loop was excellent and helped them on their way to a total score of 98.21 and a bronze medal.

Dylan Conway and Dustin Sherriff-Clayton (CO) also chose swing music for their free skate – a great choice for them since they both have personality to spare. Their program was a clean one, with equal parts spunk and precision, however, they did not quite have the speed and carriage of the top teams. Still, it was an excellent effort, especially for a team that has been skating together less than a year. With a score of 95.36, they were less than three points from the podium.

The fourth entry from Western Ontario, Claira Whicher and Wesley Killing, finished a close fifth with 95.39 points. Their Riverdance program was highlighted by an excellent level three step sequence that suited the Irish step music well.