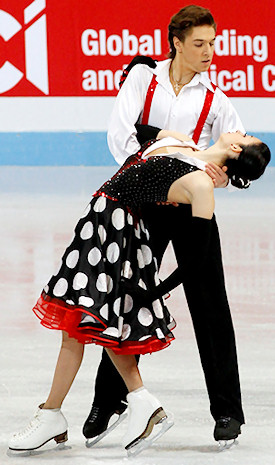 Ksenia Monko and Kirill Khaliavin of Russia are the current leaders after the Short Dance at the 2011 World Junior Figure Skating Championships.

Top favorites Ksenia Monko and Kirill Khaliavin of Russia captured the short dance on Wednesday, the first day of official competition at the ISU World Junior Figure Skating Championships in Gangneung, Korea. The team from Moscow has a lead of almost five points over teammates Ekaterina Pushkash and Jonathan Guerreiro and USA’s Charlotte Lichtman and Dean Copely.

Monko and Khaliavin had to overcome a music problem in the beginning when the wrong music was switched on twice. Nevertheless, they dealt with it professionally and delivered a strong Waltz to Padam, Padam by Edith Piaf. Their Viennese Waltz was very confident and earned them a level four for both sequences. The straight line lift and twizzles were a level four as well, while the side by side footwork was a level two.

Monko and Khaliavin interpreted the character of the Waltz very well and scored 60.62 points. Strange enough, two judges didn’t like their interpretation and timing at all, giving them just a 4.00, and even a 3.00 for this program component.

“We are pleased with our performance,” Khaliavin commented. “Of course we still could have done better, but for today we did what we had to do. What you saw today was the final performance of our short dance, but it is not the end of the season yet. We are now ready to focus on the free dance, which is the most important part.

“We liked our short dance,” he added. “Ksiusha and I tried to show our interpretation of the Waltz,” he added.

The music problem didn’t bother Khaliavin much. “Things like this happen in competition. Obviously it is not nice when it happens at a competition of this level, but what can we do about it? I think we coped with it just fine.”

Pushkash and Guerreiro produced a smooth waltz to Algo Pequenito, showing off their beautiful lines especially in the Waltz part (level 3 and 4). However, Pushkash struggled with the twizzles which were graded a level two. The students of Natalia Linichuk and Gennadi Karpanossov earned 55.76 points.

“There was an error today, but it was nothing serious,” Guerreiro noted. “We hope to do our best in the free dance.”

“Obviously everybody wants to be first,” he added. “This is our first season with new coaches and we want to improve our skating. We work a lot and changed many things on the ice and off the ice. Hopefully we can show everything we’ve learned in the free dance. That would be the gold medal for us.”

Lichtman and Copely’s dance to That’s Amore was solid, but a bit flat. They produced a solid performance that included level four twizzles and a level four curve lift. The Waltz garnered a level two and three, and the Americans achieved a new seasons best with 55.28 points.

“Overall today, we feel good about our performance,” Lichtman said. “We mostly focus on performance aspects and we feel it probably was the best short dance we’ve done this season.”

“We feel like our free dance has a lot of personality and we’ve been building on the free dance, getting a lot more speed, expressing more, connecting with each other and the audience,” added Copely.

Nikola Visnova and Lukas Csolley of Slovakia were a little surprise in fourth place. Skating to the popular (at least among junior dance teams) Waltz Once Upon a December from the Anastasia soundtrack, the team gave a good performance. They picked up a level four for the lift and twizzles, while the Waltz sections were level two and three.

The Slovaks were happy with their seasons best of 52.00 points. Their placement came unexpected to the couple.

“We skated well, but we are shocked,” explained Csolley. “We’ve worked a lot on our technique and presentation.”

“It is a big surprise for us, but we skated well and we are very happy with our performance and with being in 4th place,” Visnova added.

USA’s Anastasia Cannuscio and Colin McManus came in fifth with 50.94 points, just ahead of Evgenia Kosigina and Nikolai Moroshkin of Russia (50.88 points) and Estonia’s Irina Shtork and Taavi Rand (50.09 points).

Cannuscio and McManus turned in a solid performance and had a level two for the Waltz sections.

“We felt our short dance was really strong,” McManus said. “It was probably the best we’ve skated it all season and now is a good place to do it.”

“We just wanted to attack it and to skate clean,” agreed Cannuscio. “We are really happy with how we skated and we’re happy with our placement.”

Kosigina and Moroshkin lost a few points when Moroshkin stumbled in the side by side step sequence which subsequently earned a level one.

Shtork and Rand’s performance was clean and they happily hugged each other at the end.

There was only one fall among the 25 couples. Gabriella Papadakis, who skates with Guillaume Cizeron for France, went down on a twizzle. To their dismay, this element received no level. They finished 15th at 43.97 points.