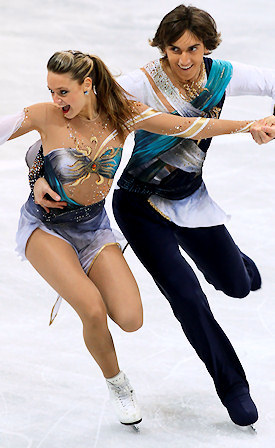 A wave of new talented Russian ice dance teams will move up from juniors to the senior ranks in the next season, and among them are the freshly minted World Junior silver medalists, Ekaterina Pushkash and Jonathan Guerreiro.

Pushkash and Guerreiro teamed up only in May 2009, but their quick success is not a big surprise as the talented dancers both had experience before. Guerreiro took the bronze medal at the 2009 World Junior Championships with his previous partner Ekaterina Riazanova, while Pushkash skated with her cousin Dmitri Kiselev, placing sixth in the same event.

It was a shock for Guerreiro when Riazanova dumped him shortly after Junior Worlds in order to continue her career with Ilia Tkachenko, but he found a new, strong partner in Pushkash and joined her training group. In their first season as a team, the Russians finished fifth in the Junior Grand Prix Final and sixth at Junior Worlds.

The name Guerreiro isn’t really Russian, and the skater wasn’t even born in Russia but in Australia as his parents – mother Svetlana Liapina, a former ice dancer herself, and his Portuguese father Francisco Guerreiro – were working there at the time. Later, the family moved to Moscow and Guerreiro only competed for Russia internationally, although he holds dual citizenship. His two younger brothers are not involved in the sport.

Pushkash, on the other hand, started out as a ballroom dancer and went into ice dance because of her cousin. For a while, she was practicing both sports before focusing on ice dance.

Pushkash moved with her cousin from the city of Nizhni Novgorod to Moscow in order to pursue her career. When her coaches, Irina Zhuk and Alexander Svinin, told her they wanted her to skate with Guerreiro, at first she refused.

“We knew it would work out because it felt comfortable from the beginning to skate together,” she noted, “but I didn’t want to skate with him, because I didn’t want to hurt the relationship within our families. But my parents told me that my career is the most important thing and that this is my life and I should choose. I thought about it and I knew to further my career in the sport it would be better to skate with John.”

The coaches were right about teaming them up. “We put together our programs within three weeks and everything was comfortable and fine. We gelled quickly as a team on the ice,” Pushkash said.

However, after the 2009 and 2010 season, the couple decided to switch coaches and went to Natalia Linichuk and Gennadi Karpanossov. This also meant that they had to move from Russia to the USA as Linichuk and Karpanossov are based in Aston, PA. This transition wasn’t easy for the dancers.

“It was very difficult for me,” admitted Pushkash. “I was pulled out of my environment completely, from my mom and everything. It is better now. The hardest time was in the summer, because we were there for three months. We couldn’t go anywhere and every day was the same.”

“Obviously it was a big change to move to the USA, but it was little easier for me as I speak English,” Guerreiro offered.

The skaters rent an apartment close to the ice rink. “We don’t have a car,” noted Guerreiro. “Our biggest problem there is that in America you need a car for everything. We live near the ice rink so we can walk, and that’s it.”

Right now the athletes focus completely on their sport and are not studying. “For our education, we are reading some books,” said Guerreiro, “but in general, all our spare time that is time outside of practice and all the associated procedures, we spend talking to our parents and families on skype. We can do that for hours.”

Linichuk and Karpanossov, the 1980 Olympic Champions, are respected coaches and have coached Olympic and World Champions and medalists. Still, the decision to switch coaches wasn’t an easy one for Pushkash and Guerreiro.

“We knew we didn’t take a risk [with these coaches], but we had to sacrifice personal comfort in order to achieve higher goals in the sport,” Guerreiro explained. “We went for it and we are very happy with the decision. It is even better than we thought. Their credits speak for themselves, but as people and specialists, our coaches are remarkable. The progress we made is not only in placements. For this year we didn’t even have a specific goal placement-wise, but our focus was on the development of our skating and skating as a team. I think we did that and this is what we’ve worked on.”

After Junior Worlds, the ice dancers went back to Russia for a vacation and to obtain new visas. They also began working on their technique and new programs for the senior year.

“We have to do the new compulsory dance,” Pushkash pointed out. “As for our goals, I think in our first senior year our main goal is to present ourselves well and to look grown up. We’ll try to skate much better.”

They know that it will be tough to make the break-through on the senior scene – especially inside Russia with the three current top teams Ekaterina Bobrova/Dmitri Soloviev, Elena Ilinykh/Nikita Katsalapov, and Ekaterina Riazanova/Ilia Tkachenko. In addition, they will have Jana Khokhlova/Fedor Andreev and the new World Junior Champions Ksenia Monko/Kirill Khaliavin to contend with.

“We have to work in goal-oriented way,” Guerreiro commented. “Now we have the conditions to work, and the only thing against us is time. We aren’t skating together for a long time, we aren’t as gelled as a team like many others, and we still have to work in order to catch up.”

Both dancers feel that they lost time when switching coaches as they didn’t train for over a month last spring while waiting for their visas.

“Next season, we’ll have more time to prepare our programs and the technique,” 20-year-old Guerreiro said. “So we hope we can work hard and make a splash next season.”

“I think we need to pick what is good in each pair and do it even better. We take one thing from one couple, another thing from another couple,” Pushkash said about their strategy. “We count on our lines and emotional connection as one of our strong points.”

Pushkash names skating skills as a weakness. “If we can add softness to our lines, it will be very good,” the 18-year-old stressed. “I think this is our weakness because of what we lost to others last year (not making the podium at Junior Worlds) as the others had better skating skills. We did the elements and got the levels, but we didn’t have that flow.”

Their favorite current senior dance team are Federica Faiella and Massimo Scali of Italy with whom they shared the ice in practice in Aston.

“They skated really well,” Pushkash noted. “We saw them at practices every day and we were lucky that we for at least one season were able to train with them.”

Pushkash said that she never really had any idols in the sport, but that she looked up to Jana Khokhlova and Sergei Novitski when she was younger as they skated in the same group. “I was always rooting for them and I didn’t pay too much attention to other senior teams. But I also liked Navka and Kostomarov,” she added.

Guerreiro has many favorites from the past. “In the past there were many good teams. Alexander Gorshkov (with Liudmila Pakhomova) was a good couple, and of course Natalia (Linichuk) and Gennadi (Karpanossov). But I think my all-time favorite team are Grishuk and Platov. They were gorgeous. I also liked Delobel and Schoenfelder. I think they are one of the most underrated teams. Within the new system the couple I like best are probably Denkova and Staviski as they were able to take these new criteria and make it look beautiful,” he explained.

When asked what they like the most about their sport, Guerreiro doesn’t have to think for long. “Performing, I’d say. When you are skating day by day and you are preparing, you know that you get tired anyway and that it will take all your strength. But at the same time you get everything from that because you live through it, you do it every day. You train every day for giving a performance.” His partner agreed. “I think I like the competitions best. It is interesting to hear the opinion of the people around you. It is interesting to compete with others on the ice and to watch the others.”

The dancers get along well and support each other. When asked to describe the partner in three words, Guerreiro quickly demanded from her with a laugh ‘only good ones’ and ‘tell the truth’.

After a short while Pushkash answered: “He is individual, beautiful and confident – in three words,” and Guerreiro described her as “smart, well-bred, and gracious.”