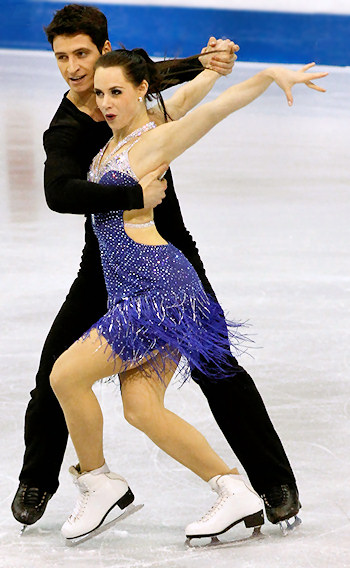 Olympic Champions Tessa Virtue and Scott Moir of Canada looked relaxed and happy and had no trouble dancing to a clear lead in the Short Dance at Skate Canada International on Friday. Teammates Kaitlyn Weaver and Andrew Poje are ranked second with Anna Cappellini and Luca Lanotte of Italy following in third.

Virtue and Moir gave the crowd what they were looking for – an entertaining and technically strong performance to HipHip ChinChin, Temptation, and Mujer Latina. The current World silver medallists got a level four and three for the Rhumba sequences, a level four for the twizzles and the curve lift, as well as a level three for the side by side circular steps. They posted 71.61 points.

“We are so excited about our skate,” said Virtue. “After last season when we watched Skate Canada International from the stands, it is much better to be out there on the ice. We’re coming off probably one of the best summers we ever had, training a 100 percent. Obviously there is still a lot of work to do with the program, but that’s the good news. It’s October and we have a full season ahead of us.”

“I don’t think it’s a secret that we had a program that was Latin last year,” explained Moir. “We kept the music, but the challenge for us was to not to do any moves the same. We use the same pieces of music, but the cuts are different and obviously we got the Rhumba in. It’s something we really enjoyed last year.”

Weaver and Poje came through with a sexy Rhumba and a fast-paced Samba, proving they have developed since finishing fifth at Worlds. The Canadians produced a straight line lift, strong twizzles, and a well synchronized side by side circular footwork. Their Rhumba sequences were graded a level three, and the couple scored 63.31 points.

“We’ve been training very hard over the summer,” Weaver commented. “Our placement at Worlds (fifth) only fueled us more, and we are excited to have skated a strong short dance with strong levels and we are looking forward to the free dance.”

Cappellini and Lanotte delivered a characteristic Rhumba and Samba as well. They, too, had good levels and earned 61.92 points.

“For us it was really exciting to skate Latin because we feel this dance belongs to us,” Cappellini noted. “It’s really our character. It was the first major competition of the season and it was a very important step. We were very happy that with the way we skated.”

The Italians had a tough year when missing part of the season due to Lanotte being injured.

“We [also] had to switch coaches, because we had problems with our team,” Lanotte pointed out, “but we came back with strong performances at Worlds. This season started completely different for us from last year, it is a a great step for us.”

Ekaterina Riazanova and Ilia Tkachenko of Russia had lower levels with only a level two for the side by side footwork and the curve lift. They are quite far behind in fourth with 54.94 points.

“We could have skated better,” Guerreiro commented. “Not everything worked out as we had hoped, for example in the footwork and the Rhumba patterns. We can improve on that.”

“We started early into the season and trained well but then I had to sit out one and a half months because of my injury,” Guerreiro explained. “I had a stress fracture in my left ankle.”

“We have the highest goal for this season and we will work towards the Cup of Russia to be completely ready,” Pushkash added.

USA’s new team, Madison Chock and Evan Bates, looked somewhat cautious in their Short Dance and Bates fell in the ending pose, taking her down with him. The Americans currently sit in sixth place (50.43 points) after the two-point deduction.

“I think I got really excited at the end of the program,” explained Bates. “Stopping is one of those things at that level we take for granted. Really, before I knew what had happened, the program was over and it took me a moment to process it.”

“I was like, oh my god what’s that down at my feet and then whoosh, I was on my butt,” Chock added with a laugh.

Overall, the Americans were still rather pleased with their program and felt they had improved the performance aspect compared to Finlandia Trophy.

“It was fun,” said Chock. “Obviously there is still a lot of work to be done and we’ll continue working and improving from here.”

Canada’s Tarrah Harvey and Keith Gagnon are currently in seventh.