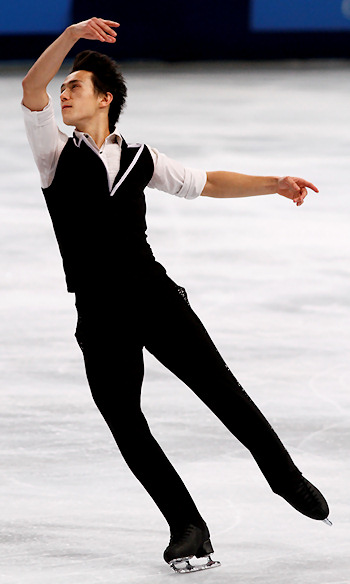 Patrick Chan of Canada performs to "Take Five" by Paul Desmond for the Short Program.

World Figure Skating Champion Patrick Chan of Canada fell on an underrotated quad toe in the Men’s Short at Trophée Bompard Friday in Paris, France, but still leads the competition. China’s Nan Song and Michal Brezina of the Czech Republic were second and third.

Chan had to overcome a tough start into his short program when he crashed on the first element, the quad. However, he rallied back to nail a triple Axel and triple Lutz-triple toe combination and also collected lots of points for his spins, footwork, and the components. The Canadian champ earned a season’s best score with 84.16 points.

“For me this was a positive achievement because I did better than I did at Skate Canada and that was my goal,” said the 20-year-old. “At Skate Canada I did a better quad, but I did a double Axel instead of a triple. Obviously I did a bad quad which happens sometimes, but I was proud of myself to go on, get up, and gather myself and go into the triple Axel and do one of the best triple Axels that I’ve done.”

Song proved that his strong outing at the Cup of China wasn’t a fluke. Skating to Requiem for a Dream, the Chinese skater put out technically the most difficult program with a quadruple-triple toeloop, a triple Axel, and two-level four spins. He only wobbled on the triple Lutz. The 21-year-old established a new season’s best for himself with 76.53 points.

“Today’s performance went better than at the Cup of China,” acknowledged the 2010 World Junior silver medallist. “I think the elements were smoother and it felt better today.”

Song went on to explain that he had changed his technique on the quad which resulted in more consistency.

Brezina hit a beautiful triple Axel and triple Lutz in his dynamic program to Japanese Kodo Drums, but he watered his combination down to a triple flip-double toe. His combination spin only garnered a level one, and the Czech earned 74.32 points.

“It was a little bit embarrassing,” said the Skate America gold medalist. “I usually don’t have problems with the triple flip combination. I just want to forget it and do it tomorrow. The program is built to have the quad, but I’m just waiting to get more consistency on it. I had to change boots after Skate America because they broke and the quad is not consistent.”

USA’s Adam Rippon missed his chance to make the top three when he underrotated both jumps in the triple flip-triple toe combination. The triple Axel was scratchy, but his favorite jump – the triple Lutz – was strong, and he held both arms over his head while jumping. Rippon remains within striking distance of the podium at 72.96 points.

European Champion Florent Amodio of France wanted to make up for his disappointing last-place finish at Skate America. He had reconstructed the jumps in his program to Summertime and Jumpin’ Jack, and he landed them: a triple Axel, triple Lutz-triple toe, and a triple flip. The problem came where he didn’t anticipate it – in the last spin. The 21-year-old lost his balance, put his foot down, and the change sit spin received no level. He scored 71.42 points.

Kevin Reynolds of Canada finished sixth after under rotating the quad Salchow and the triple Axel (65.56 points).

Nobunari Oda of Japan had an off-day. He opened his program with a triple Axel, but fell on a triple flip and had to fight for the landing of the triple Lutz. The Japanese had no combination (62.95 points).