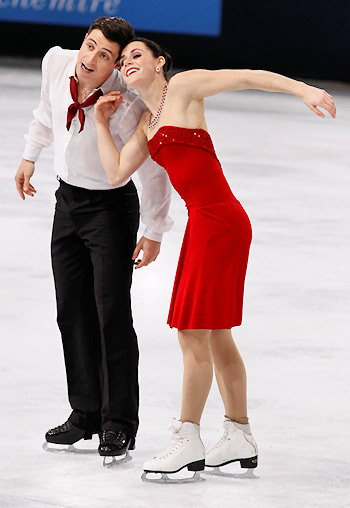 Tessa Virtue and Scott Moir of Canada danced off with another gold at Trophée Bompard as the competition wrapped up Saturday night in Paris, France. The Canadians turned in a confident performance to take their second gold medal at Trophée Bompard. They had won here in 2009. Nathalie Pechalat and Fabian Bourzat of France were a strong second and Anna Cappellini and Luca Lanotte of Italy claimed the bronze medal.

Virtue and Moir’s enjoyable free dance to the movie soundtrack of Funny Face included fast twizzles and very smooth looking step sequences and lifts. The twizzles, the spin, and the lifts all garnered a level four and the footwork was a level three. However, the combination lift was a tad too long which resulted in a deduction for an extended lift. The Olympic Champions scored 105.75 points, just one points below their seasons best, and totaled 176.93 points.

“We went out and did exactly what we wanted to do, which is really to push the program and try to skate with some speed,” said Moir. “That felt really good. I think our points were good. I made a little mistake on the last lift and that cost us a timing deduction. That’s why we didn’t have a season’s best, but for us, that was a season’s best skate and the overall feeling was good.”

“One of the great things about being in Paris is that this where „Funny Face“ was filmed,” noted Virtue. “So were trying to think about that when we were skating and we’re going to walk down Champs Elysees just like in the movie and take some photos.”

Pechalat and Bourzat turned in a powerful performance of their Egyptian-themed dance they named The Pharaoh and his Mummy. The innovative lifts were impressive, and their elements were strong. The French had exactly the same levels for their elements as Virtue and Moir, however, the judges held back on the Grades of Execution (GOE). Actually, a gap of 7.71 points in the free dance score seemed a little large. The European Champions earned a new season’s best of 98.04 points which added up to 164.56 points overall.

“We did a wonderful free dance tonight, really strong and powerful from the beginning,” commented Bourzat. “The audience cheering for us throughout the program was a great support, and we did all the elements without thinking.”

“The program is very difficult physically, much more so than Charlie Chaplin (last year),” added Pechalat. “We still need to put more energy into it, but today we skated without mistakes and I am very happy.”

Cappellini and Lanotte gave a solid performance of their La Strada, however, the curve lift was shaky. This lift and the diagonal footwork were a level two, but five elements earned a level four. The Italians picked up 89.14 points and added a second bronze medal to their bronze from Skate Canada with a total of 153.76 points.

“The program at Skate Canada was a little bit cleaner,” observed Cappellini. “It was a tiny bit shaky this night. I’m not sure why.”

“It is very good for us to have won two bronze medals,” she added. “We didn’t expect this at the beginning of the season. This (curve) lift is new for us and more difficult than what we did before. Luca had some pain in his back and we didn’t practice it much. To do less damage, we decided not to complete this lift.”

Performing to a modern version of Ave Maria, Elena Ilinykh and Nikita Katsalapov had great flow and looked smoother than at NHK Trophy last week, however, the last three elements – the spin, the diagonal footwork, and a wobbly lift – merited only a level two. The Russians remained in fourth place at 140.32 points.

USA’s Madison Chock and Evan Bates had replaced Tiffany Zahorski and Alexis Miart of France on short notice. Chock fell on the twizzles, but all other elements were solid. The Americans finished fifth with 130.94 points.