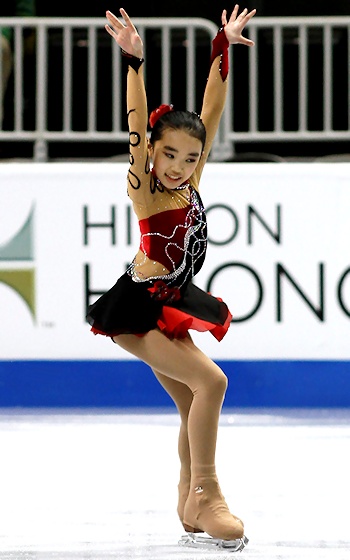 The San Francisco 49ers loss last night added to the gloom of a rainy Monday afternoon in the Bay Area today, but a local girl cast away the clouds in a big way at the 2012 U.S. Figure Skating Championships in San Jose, Calif.

Karen Chen, a prodigious 12-year-old, captured the novice ladies title with the highest competition score ever since the new judging system was put into place at the U.S. Championships back in 2006. Her program, set to music from The Godfather, was as convincing as Don Vito Corleone himself.

“I feel very happy that my points were higher than the last time I competed,” she said. I know I’ve improved from my last competition and I’m very happy thinking of that.”

Barely able to see over the boards surrounding the ice at the HP Pavilion, Chen completed the most technically demanding program of the competition. With a double Axel-triple toe loop combination, as well as five other triple jump attempts, the Fremont, Calif., native ran away with the title by a little less than 15 points.

The win is Chen’s third national title in as many years, winning the juvenile and intermediate titles in 2010 and 2011, respectively. Her competition total of 140.17 points eclipses the former record set by 2006 Champion Rhiana Brammeier.

“Kristi Yamaguchi has helped me,” Chen shared about her fellow Fremont resident. “She told me to think about my goal and what I want to accomplish. That has helped me push through hard times.”

Moving up from third place after the short program to capture the silver medal, was 12-year-old Amber Glenn from Plano, Texas.

“I had a lot of motivation from my inspiring family and coach,” she said. “They pushed me and helped me get through the rough times so that I could work hard and get the harder jumps.”

Skating to perhaps the most popular music of the season—The Black Swan soundtrack, Glenn was fearless in her attack. The tiny Texan landed five triple jumps, including two Lutzes, to finish with 125.88 points in the competition.

“She got off the ice today and said, ‘I did it when it mattered,'” said coach Ann Brumbaugh about her medal-winning student. “That was a fun thing for her to learn. She’s always had the talent. She just had to overcome her nerves.”

Slipping a place to win the bronze medal was 14-year-old Eastvale, Calif., resident Amanda Gelb. Despite the lesser technical content—Gelb only attempted two triple Salchows, she was able to use her strong component skills to stake her claim to the podium.

“I had fun and did my best,” Gelb said after the competition. “I accomplished all of my goals.”

Skating to Edvin Marton’s Romeo and Juliet, Gelb earned 122.34 points in the competition.

Madison Vinci maintained her fourth place standing after the short program yesterday to win the pewter medal despite her seventh place finish in today’s competition. The 15-year-old from Leesburg, Va., skated to Phantom of the Opera, and finished with 116.56 points in the competition.