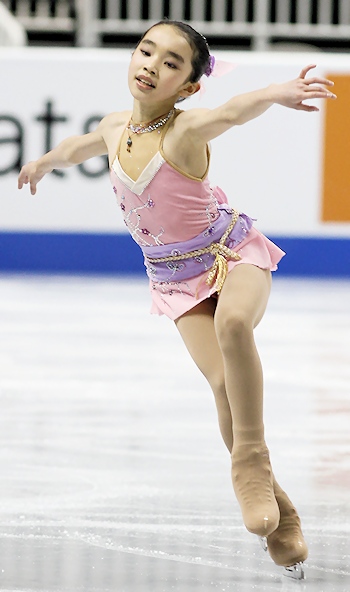 In January 1996, Rudy Galindo made good on a career full of promise by winning the U.S. National Figure Skating Championships men’s title in spectacular fashion in his hometown of San Jose, Calif. Almost 16 years to the day another local, Karen Chen– who had yet to be born when Galindo brought down the house, captured the 2012 U.S. novice ladies title in the same arena.

“I was very excited,” said the 12 year-old. “It felt just like a dream standing on the podium, but I knew that it was real. I knew then that all of my hard work had paid off.”

And boy did it pay off. Chen’s competition score—140.17 points, was nearly 15 points higher than the silver medalist’s, and is the highest score recorded by a novice lady since the international judging system was implemented at the U.S. Championships in 2007.

Though Chen had competed at the U.S. junior nationals on two occasions—winning the 2011 intermediate title and pewter on the juvenile level in 2010, this was Chen’s first time competing at ‘big’ nationals.

“It was very interesting because it felt like a local (club) competition,” she giggled. “It was local, but at the same time it was a big competition. It was very weird to think that I was going to this very big national competition so close to home.”

Chen lives in Fremont, Calif., which is a short 30-minute drive from the HP Pavillion where she won the title. It is also the hometown of 1992 Olympic Champion Kristi Yamaguchi, who has acted as a mentor to Chen leading up to the competition.

“Kristi helped me a lot,” Chen explained. “Before nationals, she gave me wonderful advice. She told me that nationals is a very big competition, and that I worked so hard to get invited. She told me to just have fun out there because the competition only comes once a year.”

Skating so close to her hometown, Chen said that she did not feel that much pressure, but perhaps it was because she had her secret weapon.

“I don’t know if it was an advantage to sleep in my own bed or not,” Chen said about having the luxury of staying at home during the competition, “but I do like sleeping with my own pillow. I take it with me when I travel.”

For the 2012-13 season, Chen has decided to compete on the junior level, and tested successfully earlier this month to be able to do so. However, she is too young by 26 days to compete on the Junior Grand Prix circuit this fall.

Chen has already learned that moving up to the junior level presents new challenges.

“It’s very challenging in moving from novice to junior because the program is longer,” she said with an audible sigh. “If you do jumps in the second half of your program, you get a bonus, which is something that I strive for. The downside of that is the further you go into your program, the more tired your legs get and you still have to do those jumps. It’s very difficult to build stamina to be able to do that.”

The 4-foot-5-inch tall champion works with coaches Sherry Krahne-Thomas and Gilley Nicholson out of the Peninsula Skating Club.

“Sherry works on my spins a lot because she is very good with them,” Chen explained. “Gilley works on my jump technique and choreography.”

Since winning the novice title, Chen has been working with Krahne-Thomas and Nicholson on improving all areas of her skating, and has been focusing lately on presenting a more complete picture on the ice.

“I was working on triple-triple combinations, but recently I am working more on skating more mature,” Chen shared. “I have a tendency to rush things, so I am trying to work on that to help my component marks.”

“Until now in my programs, my arms were frantic and moved around a lot,” she continued. “I’m learning to extend my arms more and am working on pointing my toes more.”

“I’m also working on my facial expressions and trying to get deeper edges in my footwork,” Chen added. “My coaches make me practice my turns and try to dig into the ice. When you do it right, you can hear this creaking noise, and that is exactly what I am trying to get now.”

Chen spent some time in southern California earlier this year working with Karen Kwan to create her new competitive programs.

“Karen worked with me a lot on the choreography,” she said. “Gilley has helped me with the footwork and transitions within the programs.”

For the short program, Chen will skate to music from the film The House of Flying Daggers, and to Fantasy for Violin and Orchestra from the Ladies in Lavender soundtrack for the long.

“There are lots of drum beats in the background of my short program music, which makes it very powerful,” she said.

For this competitive season, Chen hopes to make a return trip to the national championships, but is mindful of the fact that it is a long road until Omaha 2013.

“The qualifying season is a long journey,” she observed, “so I have to be careful that I am pacing myself and not overworking my body.”

When she isn’t busy with skating, Chen is a straight-A home-schooled soon-to-be eighth grader who has a special talent for art.

“I have loved drawing ever since I can remember, and five years ago I went to Soho art class,” she said. “In class I learned about the different types of materials that you can draw with and about different types of paper. I enjoyed it.”

Chen loves using soft pastels and oil pastels because they are easy to blend.

“I love making my own colors—especially blue. That’s one of my favorite colors,” she revealed. “It’s something that I enjoy and put my heart in to. I do it more for fun.”

Chen’s younger brother, 9 year-old Jeffrey, with whom Chen admits to arguing on a regular basis, recently started skating as well.

“After I won at the championships, I guess that he thought it was fun, so he started skating,” she said. “He can do Axels and the double jumps. He’s still working on them—he’s not quite consistent yet. His spins aren’t the best yet, but they are getting better.”

Since Chen’s parents are originally from Taiwan, she is learning Chinese in school.

“I speak much better than I can read or write, but I am working on it,” she said.

When Chen is not skating, drawing, arguing with her brother, or learning Chinese, she likes to do something that most kids do in the summer—swim.

“When the temperatures get really high, it feels great!”