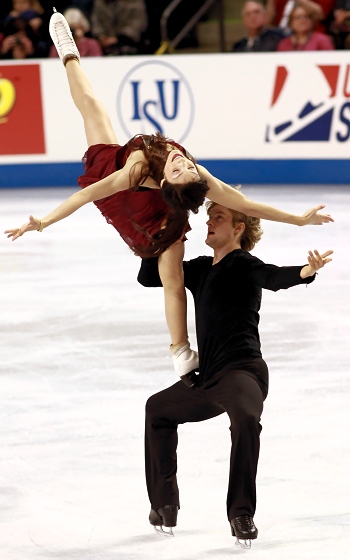 “Charlie and I felt like it went quite well today, but we know that we can get that technical score much higher than it was here,” Davis said. “But overall, we are thrilled with the performance, with the audiences here, and we want to thank everyone who made this event come together for such a great event.”

Davis and White dominated with level fours on five different elements—four of them lifts, and earned positive grades of execution (GOE) on each judged element. The program was more than just strong technical elements, however, as the duo captivated the audience with the story of Quasimodo and Esmerelda from the musical. There overall score was 176.28 points.

“It was very important for us to keep the consistency of the story,” Davis explained. “Charlie and I have an understanding of basic French, so that helped us to understand the story a bit more. There are several leading men in the story, and we wanted to make sure that we didn’t have different men singing to Esmerelda to keep the story consistent.”

Moving up from third after the short dance to snatch the silver medal were Russians Ekaterina Bobrova and Dmitri Soloviev. The European silver medalists scored 97.04 (47.71/49.33) points in the free dance, and maintained second overall with a total score of 159.95.

“We are very pleased at such a competitive event with such high level athletes to do so well,” Soloviev said.

Bobrova and Soloviev skated to a medley of Man With a Harmonica by Ennio Morricone and a modern version of Puccini’s Tosca, and earned level four on six elements in the program. The duo credited their new coach, Alexander Zhulin, for their improvement.

“The male perspective is different, and we had been coached only by women before this,” Soloviev offered. “There is a different approach to the psychological and mental part of skating that has allowed us to go into competitions much calmer than we did before. (Zhulin) has had a strong impact on that.”

His partner added, “It was not an easy decision to change coaches. After all, we were with our previous coach for 12 years. The training is completely different for us, and we have been working hard on everything.”

Slipping to third place were Canadians Kaitlyn Weaver and Andrew Poje, who skated a beautiful program that might have been inspired by the story of Pygmalion. The music, Humanity in Motion by Nathan Lanier, provided the backdrop for the statuesque Weaver to come to life and compel Poje to fall in love with her. The program, which earned them 91.53 (41.59/49.94) points, was a crowd favorite, but technical levels kept the duo from placing higher in the competition.

“We’re pretty disappointed with our free dance today,” Weaver confessed. “Several of the minor mistakes just added up. The good thing is that these are the easy things to fix, and we are no strangers to going home and working hard to rework the little things. We created an audience-friendly program which was a goal of ours, so we’re happy about that.”

Weaver and Poje’s score suffered from level twos on their opening spin, as well as both step sequences, however, their competition total of 157.32 was more than enough to keep them on the podium.

“We will get a lot more feedback, but what we know is that our spin was probably short a rotation,” Weaver said. “We didn’t get the highest levels on our footwork, either. The little things here and there start adding up to a point here and a point there, but we’ll go home and fix them.”

USA’s Lynn Kriengkrairut and Logan Giulietti-Schmitt finished in fourth place—their best placement in a Grand Prix event ever. The Michigan-based team skated a sassy program to music by the pop sensation Adele, placing fourth (87.52) in the free dance and overall (141.41). The total was more than ten points better than their personal best.

“We listened to Adele last year, actually, and we really find her music moving,” Kriengkrairut explained of their free dance. “With her recent popularity, we just kept hearing Adele over and over again. We love the songs Turning Tables and Rumour Has It and we thought the two songs really blended together well and we kept coming back to it when we were listening to different pieces of music. These were the ones that really spoke to us.”

“We were a little worried about it, with Adele’s recent popularity, about over-playing on the radio and everything,” added Giulietti-Schmitt. “We looked for other pieces for a few months and we just kept coming back to Adele because we thought it spoke to us so well and really have something that’s moving.”