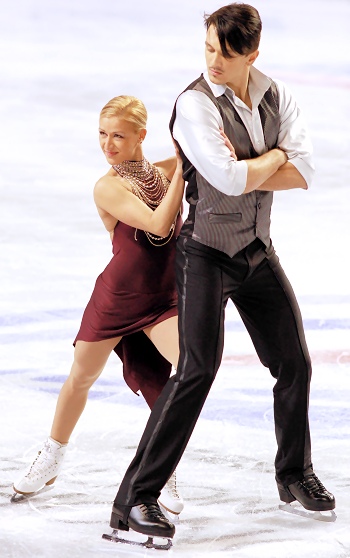 The ISU Grand Prix of Figure Skating kicked off this evening in the Seattle suburb of Kent, Wash., with the 2012 edition of Skate America. It is the third time in five years that top skaters from around the world descended upon the Pacific Northwest for the event.

The first event of the competition was the pairs short program, which played out the way it was expected with Russian World silver medalists Tatiana Volosozhar and Maxim Trankov taking the lead over the perennial contenders Qing Pang and Jian Tong of China.

“We are not so happy with the performance,” Volosozhar, 26, admitted. “We (made) a lot of mistakes, and I hope that we will skate better tomorrow in the free skate without mistakes.”

The reigning European champions scored 65.78 (32.87/32.91) points for their efforts, but left many points on the ice. Trankov struggled with the landing on his triple Salchow attempt, and the throw triple loop was a bit shaky as well. They otherwise impressed with a level four lift which earned mostly +2 grades of execution (GOE) from eight of the nine judges, and showed good level four footwork.

“We have to think about what is going wrong,” analyzed Trankov. “After Worlds, we’ve never felt the same (in the short program), and we were very nervous, but I think that we have to work and see why we are skating bad programs.”

“This is the second time that we have made mistakes, not just on the elements, but on the (choreographic) steps as well,” the 29-year-old continued. “It’s very bad and strange. We’ll have to talk with our coach and figure out what we need to do to fix this.”

Pang and Tong, competing in their thirteenth Grand Prix series, arrived in Kent a bit under-trained due to a nagging injury to Tong’s knee, however, they performed well under the circumstances.

“My knee hurts when I skate, and I have less flexibility than before,” said the 33-year-old veteran. “It affects the jumps, and I’ve been unable to train as much as I usually do. I used to train five to six days a week, but we’ve had to limit it to four days.”

The injury may have reared its head in the opening triple toe loop in which Tong fell to the ice. Pang also struggled with the landing of the throw triple loop, however, the 2010 Olympic silver medalists still showed the best triple twist and back outside death spiral of the event.

“We think it is a good start for us,” said Pang, 32. “At the beginning we had some trouble, but we’re happy to be at this competition.”

Their score of 61.96 (31.50/31.46) points was enough to hold off American champions Caydee Denney and John Coughlin, who finished in a very close third.

“We have been in the industry for 13 years since 1999, but now it is really different than before because we’ve been through troubles, sickness,” Tong commented when asked of their motivation to continue. “We want to pass on our experience to younger generations. We want to teach them to learn and teach them to make their sports (lives) last longer.”

Denney, 19, and Coughlin, 26, were the cleanest skaters of the evening, earning the highest technical element scores with their “Concierto de Aranjuez” program. They also displayed a very good triple twist, and were solid on their triple toes and throw triple flip.

“It’s always exciting to skate in our home Grand Prix,” the always-cheerful Coughlin said. “It’s nice that we’ll be able to get a full season under our belts this year, and performances like this only help our confidence.”

“Putting that timing and experience together, we felt really comfortable out there together and it was a really good start for our Grand Prix season,” added Denney. “Each one is going to get better and we’re going to work toward bigger goals.”

“It was a little nerve wracking because it was the first Grand Prix,” said Castelli. “We really want to do well and really never actually trusted ourselves doing what we trained, but this time we just let go and trusted ourselves. While it wasn’t our personal best, that is a great starting point for us.”

“It took a little jitters to get out being the first international of the season,” added Shnapir, “but we were training so hard. Just the way we were carrying ourselves beforehand, it feels completely different [than last season]. It feels really great.””