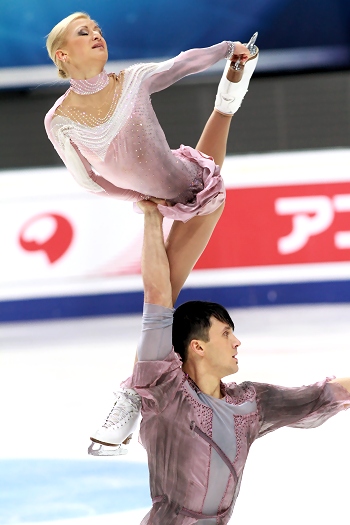 With the upcoming Olympic Games in Sochi entering into public awareness, people arrived at the Megasport venue in Moscow throughout the Ladies figure skating event until the arena was nearly filled to capacity for the Pairs Final. The competition at the 2012 Cup of Russia was certainly worth the price of admission for the sheer intensity of medal contenders’ performances.

Volosozhar and Trankov won both the free program with 132.79 (62.74/72.05) points, and overall (207.83) by considerable margins, however, their performance to Violin Muse by Ikuko Kawai was a struggle for the two-time World silver medalists. The team missed both jumping passes and a throw triple Salchow.

“Today we missed all elements that required good coordination,” admitted 26-year-old Volosozhar at the press conference. “But we are happy with the levels we got for our other elements, and we had great grades of execution (GOE) for our triple twist. I saw plenty of “+3″ in the protocol. Maybe we were too focused on our short program this time.”

“Our program is very challenging,” explained Trankov. “We have a lot of difficult elements in the second half of it. We made mistakes on jumps and throws today, but at our previous events, we got rather low levels for non-jumping elements. So it was something we have been working on a lot recently.”

“We are happy that we got those levels,” he continued, “and that we did those elements well. It’s better this way. We know that we can do jumps and throws easily in practice. We would have been more upset if we had made mistakes on lifts again, because it would have meant a certain trend.”

Trankov felt that it was a good performance for this part of the season.

“When we choreographed this program, we realized that it would be this way,” he said. “That it would grow over the course of the season and it will be at its best at Worlds.”

“Our goal was to qualify for the Grand Prix Final,” the 29-year-old summed up. “Last year, we wanted to be the top team in the rankings going into the Final, but this year we are no longer worried about it. We would be perfectly content to skate second to last in Sochi.”

When asked if they plan to make the program even more difficult, the skaters answered that they could not think of a way to do it.

“I think we already have a lot of difficulty,” said Trankov. “We got low levels of difficulty at our previous events, but it was mostly a lack of attention to detail, like holding positions long enough. Now we got all level fours. We got difficult elements in the second half, and I think it is as difficult as it gets in Pairs.”

Bazarova, 19, and Larionov, 26, also made several mistakes in their powerful performance to Spartacus. Larionov stumbled out of his double Axel, and Bazarova had a shaky landing on the throw triple flip. The Russian champions also had to abort a lift in the second half of the routine. They earned 125.06 (61.12/63.94) points for the free, and maintained second overall with 191.08 points.

“We cannot say that we are happy with the performance,” said Bazarova. “We made mistakes, not only on jumps, but also on a lift. However, our goal here was to show our new program to the public and the judges. We were more focused on the presentation, choreography, and on displaying emotions, and I think we succeeded in this department. Now we will have to focus more on the elements the next time.”

“That mistake on the lift was really an accident,” explained Larionov. “Today was the first time that we skated the program in new costumes, and my hand got kind of caught in her dress and I was not able to free it.”

The 2012 European silver medalists admit that they might have been affected by their focus on the artistic side of the program.

“I think we were really invested in this performance,” said Bazarova, “especially in the second half. We were a bit carried away in the slow section and lost our focus.”

Bazarova and Larionov, who are best known for their lyrical programs, are trying something new this year. The music of Aram Khachaturian’s ballet is powerful and commanding, and presents new challenges to the skaters.

“We always wanted to skate to this music,” explained Bazarova. “Ludmila Vlasova, our choreographer, worked very hard with us to make sure that the program was done well. It is very powerful, right from the beginning, which is a new direction for us. In the past, we started with slower music and let the program build, but now we have to be powerful from the start. I think we are getting used to it.”

Power was something Denney, 19, and Coughlin, 26, had in spades. They flew from one element to the next in their routine set to music from the infamous Phantom of the Opera soundtrack, and it seemed that the skaters did not even stop to take a breath throughout the 4:30 minutes. The only technical flaw in their program was the first double Axel in sequence, which was underrotated. Otherwise, the U.S. champions were strong, and received 120.19 (61.28/58.91) points for the free program and 179.21 overall to win the bronze.

“We are very excited about the improvements both in program components scores and in the technical score since our last event,” said Coughlin. “There are still some things to improve, we did not get all the levels we know we are capable of, but I think we have great energy today and we really enjoyed a loud support from the Russian audience. It is a tough event, with many strong teams, so to win a medal is a good result. It is an honor to skate in Russia, the country with such an outstanding traditions in Pair skating.”

Despite a notable gap in marks between them and the top two teams, the students of Dalilah Sappenfield remain optimistic.

“Of course, there is always work to be done,” admitted Coughlin, “but I think a year and a half ago, the gap would have been at least twice as big. So we are pleased that we are moving in the right direction. We have improved our season’s best and we are getting closer to our personal bests. This is a tough thing to do so early in the season, because we all know that marks at the ISU Championships, like Four Continents or Worlds, are usually higher than at Grand Prix events. All we have to do now is to continue to work hard, and we will be catching up.”

Canada’s Paige Lawrence and Rudi Swiegers were the last competitors to score above 100 points for their free program (102.30), however, their performance to music from the War Horse soundtrack was rather disappointing. The team missed both throw jumps, as well as a double Axel, and once again had troubles with the twist lift. However, they were able to maintain fourth overall with 154.16 points ahead of Russia’s Anastasia Martiusheva and Alexei Rogonov.

Martiusheva and Alexei Rogonov nailed their opening triple Salchows, but made a couple of mistakes later in the program and received rather low levels of difficulty on most of their elements (150.15).