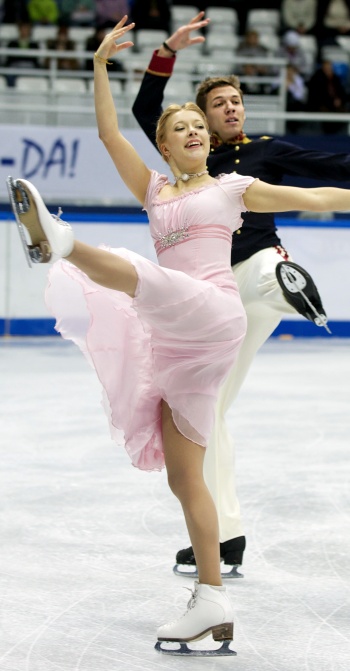 The 2013 Russian National Figure Skating Championships began today in Sochi with the Short Dance competition, which was mostly held in an eerie silence. Even though the Championships have never been sold out in recent years, this season the crowd is especially thin.

Due to ‘high-security area’ status of the future 2014 Olympic Park and all its venues, the organizers required all ticket holders to go through a rather rigorous clearance procedure in order to gain access to the venue. No tickets were on sale for the competition which features some of the world finest skaters, but the media was told that some tickets were distributed locally.

Of the four figure skating disciplines, the ice dancers were most likely to suffer most from the lack of feedback. Some of them were rather worried.

“We enjoyed coming back to Sochi, it almost feels like home,” said the two-time national champion and ISU Grand Prix Final participant Ekaterina Bobrova on the eve of the event, “but we are concerned that only those who managed to arrange an accreditation would be able to attend the championships.

“One had to fill in a long questionnaire, send a photo, and then wait for the outcome of clearance procedures before they were able to come here,” she continued. “For many, it was a challenge. Frankly, I cannot imagine figure skating without spectators.”

Despite their reservations and less than perfect twizzle sequence, Bobrova and her partner Dmitri Soloviev danced smoothly to the lead in Sochi. The team only earned a level two for the second round of the Yankee Polka and a level three for their twizzle sequence, however, they picked up the highest technical and program component scores of the night to earn 68.05 (31.71/36.34) points.

More importantly, however, the skaters continue to impress with the understated quality of their skating. The team, which is famous for their elaborate and theatrical dances and outfits, reinvented themselves after they switched to Alexander Zhulin last summer. They got rid of nearly all adornments and allowed their skating to speak for itself. The outcome is nothing short of astonishing.

Bobrova and Soloviev’s short dance, set to the music from Soviet movies, does not try to spin the ISU requirements in any way, but follows them rather faithfully, uniting polka and waltz rhythms in a easily understandable love story. Simple costumes, clean lines, and strong basic skating skills all work together to produce a very neat and refreshing program, which was a class apart from other performances of the day.

“We were in a good mood before the short dance today,” said Bobrova, 22, about their performance. “My twizzles were not entirely clean, but the rest was well done. Truth be told, we have not yet seen the breakdown of the judges’ marks and we are looking forward to checking them, but we are satisfied with our performance.”

“We are in a very festive mood, in a good sense of a word,” agreed her partner. “We made no major mistakes. We are pleased with the way we skated. It was a very collected performance.”

“I think today we showed good workmanship,” added Bobrova. “For the Europeans, we will try to unite the emotional and technical sides and make both of the them superb.”

When asked about low attendance, the skaters claimed that it did not affect them at all.

“My biggest fans were here today,” explained Bobrova. “My mother, my father, my sister and a couple friends, who arrived here to root for me. It is great to know that your closest people are in the audience, and today all of them were here. So my main audience was with me today.”

“The number of people does not matter,” added Soloviev. “There are people watching us on TV too, so we skate first of all to please ourselves and then to please all the people who watch us. We are always grateful to them. Not everyone can afford to come here. So many other people, in addition to those in attendance, followed our performance.”

In contrast to Bobrova and Soloviev, Elena Ilinykh and Nikita Katsalapov set out to do something unique right from the beginning. They performed their short dance to an Andijan Polka, a track specifically recorded for them, which is based on Uzbek national tunes. Unfortunately, the custom-made recording turned out to be a second too long and the team picked up a one point “overtime” deduction.

“We were told that the stopwatch clocked 3:01,” explained Ilinykh.

The students of Nikolai Morozov had already received this kind of deduction at the 2012 NHK Trophy.

Technically, the 2012 European bronze medalists were sound, but they had a couple of close calls and both Yankee Polka sequences in their dance received only a level two. In addition, their Uzbek adaptation of classical rhythms still does not look fully integrated at the moment. The overall impression from the dance is very strong, and connecting moves are perfectly stylized to match the character of the music, however, the required elements are not incorporated enough into the fabric of the dance.

“I think we skated rather well today,” said Katsalapov. “It was a very decent showing, much better than at our last event (ISU Grand Prix Final).”

“Today we felt the ice 100 percent,” he added, “and even though spectators were few, we had a lot of positive feelings before the performance. We were in a good mood and were ready to deliver. We have some time after our last event to work on our mistakes, and I believe that we have exceeded expectations today.”

The lack of spectators did not come as a surprise.

“Valentin Nikolaevich [Piseev, the Director General of the Figure Skating Federation of Russia], warned us yesterday not to expect a lot of fans,” explained Katsalapov, “so we were prepared. At least we had more people than at the seven o’clock practice session. We expected it to be a kind of test version of a competition and everything went well. It did not make much difference in the end.”

“I think those few who attended tried their best to shout out for everyone, to give it 100 percent and to replace thousands of missing fans,” agreed Ilinykh.

The third place went rather unexpectedly to Ksenia Monko and Kirill Khaliavin. The 2011 World Junior Champions delivered an enchanting waltz to a famous Sous le Ciel de Paris tune, but as the dance seemed to draw to a logical conclusion, it suddenly turned into an extra 40 seconds of Yankee Polka. Otherwise, both parts of the dance looked good, with strong flow and appropriate expression.

“I think we showed a very decent performance today,” said Monko afterwards. “I believe it was our best short dance of the season and our marks reflect it. I am very happy.”

“First of all, we would like to thank those fans who did attend the event,” added her partner. “It has been a pleasure to perform for them. We have tried to stay calm and I think we managed it. We tried to show things we have been working on since the Rostelecom Cup. We managed it as well, at least in part. We will try to deliver the same kind of collected performance tomorrow.”

“There are plenty of competitions which attract even smaller audiences,” explained Khaliavin, “so it was okay. We felt a lot of support. The quality of support is more important than the number of people.”

The two-time ISU Junior Grand Prix Final Champions believe that hard work and good relationships with their coach is the key to their success.

“We practiced, practiced, and then practiced some more,” said Monko about the progress they have achieved since Rostelecom Cup. “Seriously, we did devote a lot of attention to key points in the polka, to step sequences, and all other elements. We worked hard trying to improve our level.”

“Alexander Zhulin set a goal for us, even though I will not tell you what it was,” teased her partner, “but we have been working on achieving it. He felt we did a great job today and it means a lot for me. I think the key is that we trust our coach and he trusts us.”

“We have been waiting for those marks all season long,” joked Khaliavin about their high score. “We are happy that everything went well in the short dance at the most important event of the season.”

Competing at their first Senior Nationals, Viktoria Sinitsina and Ruslan Zhiganshin finished fourth with 60.03 (29.64/30.39) points. The 2012 World Junior Champions were the only team in the top six to receive a level two for their non-touching step sequence, and their Yankee Polka sequences were only graded a level three and two. Still, their combination of the Tennessee Waltz and polka was the most entertaining program of the event and provided an excellent conclusion to it.

Defending bronze medalists Ekaterina Riazanova and Ilia Tkachenko had to settle for the fifth place with 59.88 (26.64/33.24) points. The team from Odintsovo was quite happy with their performance, but the technical panel awarded both their Yankee Polka sequences with only a level one.

Ekaterina Pushkash and Jonathan Guerreiro round out the top six (57.19).

Kristina Gorshkova and Vitali Butikov, seasoned national-level competitors, withdrew from the event due to Gorshkova’s illness.