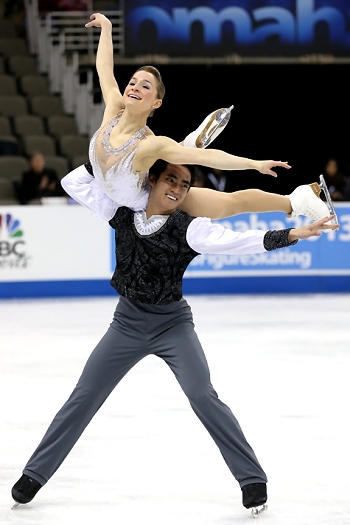 Madeline Aaron and Max Settlage perform their Short Program at the 2013 US National Figure Skating Championships.

The junior pairs took to the ice today at the 2013 U.S. National Figure Skating Championships in Omaha, Neb., and they showed up to fight for a spot on the podium.

At the end of the battle, it was 18-year-old Madeline Aaron and 20-year-old Max Settlage who came away with the lead over training mates Britney Simpson, 16, and Matthew Blackmer, 21.

“We just felt really calm, and that was just our key out there,” Aaron said after the program. “We were in our knees, and that’s how we were able to do a performance like we did.”

The Colorado Springs-based leaders skated a balletic program to Saint-Saens’s The Swan—an appropriate selection for Aaron, who has 12 years of ballet training under her belt. The program was performed with a confident ease that coach Dalilah Sappenfield has been trying to infuse into the top two teams’ skating this season.

“The kids have put a lot of pressure on themselves to skate well, and we decided to take a different approach,” Sappenfield explained. “(Simpson) came up to me and told me that she had an idea—that our run-throughs should be called fun-throughs, and that’s how we’ve tried to approach this competition.”

Aaron and Settlage were technically solid from start to finish, earning positive Grades of Execution (GOE) on each of their seven elements. The highlight of the program was a strong throw triple Salchow that transitioned into an elegant level four lift.

“We’re just really focusing on how to skate like we do at home,” Settlage explained. “We’re training like we want to compete, so we’re trying to keep everything even and calm.”

Aaron and Settlage earned 52.94 points for their performance, giving them a two point advantage over Simpson and Blackmer.

Reigning silver medalists Simpson and Blackmer also performed well, and showed a new lightness to their skating that worked well in their new Flamenko short program.

From the start, it was apparent that Simpson and Blackmer were going to skate well—the confidence oozed from the Junior Grand Prix veterans as they checked off each element. In addition to a strong throw triple Salchow, the duo’s pairs spin was the class of the field.

“We definitely have to give credit to Janet Champion,” Blackmer said about the spin. “She’s our spin technician, she loves us to death and really gets into it. She’s an amazing spinner and we’ve learned a lot. She’s definitely one of our pushers. We kind of have someone for each segment of our skating, but Janet has been really good for our spins.”

Simpson and Blackmer scored 50.25 points for their short program.

“It wasn’t perfect, but we definitely fought through and I think we did a pretty good job,” Calalang said.

Last year’s pewter medalists opened their Elite Syncopations program with a flawed double Axel attempt, but quickly regrouped and nailed the rest of their elements. The duo earned level four on the combination spin, lift, and step sequence.

“There [were] a few things that we could’ve done a little bit better, but I mean as long as we stay in it after the short, we’re fine,” Sidhu said of the performance. “Tomorrow we’ll just do what we do at home and try to stay calm.”

Calalang and Sidhu head into the free skate with 48.32 points.

Chelsea Liu and Devin Perini, last year’s novice champions, finished in fourth place with 47.20 points, and fit in well with their competition.

“I thought it was a great performance,” Perini said. “Our goal was to get our levels which we did, but obviously we’re not sure yet. We just tried to come out and do the best that we could in each element.”