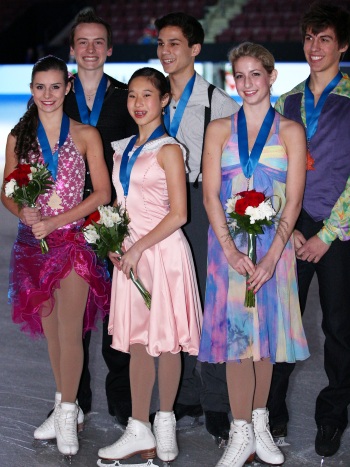 For the first time in Skate Canada history, the British Columbia/Yukon section swept the medals in a dance event at the 2013 Canadian Tire National Figure Skating Championships.

This sweep comes after several years of intense dance development in Vancouver, B.C., and this trio of dancers—Danielle Wu and Spencer Soo, Brianna Delmaestro and Graeme Gordon, and Alexa Linden and Tyler Miller—is only a slice of the talent that the province boasts at these championships. All three teams train together at the BC Centre of Excellence with coaches Megan Wing and Aaron Lowe.

Wu, 14, and Soo, 15, won the event, nearly setting a Canadian record at the novice level. Their charming ragtime free dance from The Sting was smooth and secure, with good speed and deep edges. They almost let the last lift get away from them, but managed to save the element with some quick thinking, and the quasi-mistake did not detract from the overall effect.

The team won the free dance with 66.41 points and the event overall with a total of 96.47 points.

“That was just us getting too excited,” Soo explained.

“We tried to think of it as just another run-through out of the eight million we’ve done,” Wu said. “We did pretty awesome.”

Delmaestro, 17 ,  and Gordon, 19,  were only sixth at the Challenge last month, but rallied in Mississauga to win the silver medal. Their sassy Latin number was a clean outing, and is especially impressive given that Delmaestro only began competing in dance last year. After being the only team from their training group to miss the podium at the Challenge, they were thrilled to win a national medal.

“I think we skated really well,” Delmaestro said. “It was so much fun being out there.”

“We just stayed in the moment,” Gordon added.

Linden and Miller’s free dance set to The Beatles music from Across the Universe showed off their speed and excellent connection. They have been skating together for less than a year and 17-year-old Miller is another new ice dance convert, however, the two are good friends and have quickly developed chemistry. Compulsories are still the weaker portion of their competition—they were fifth heading into the free dance this time—but they are improving.

“We definitely push each other to do better,” 18-year-old Linden said about their training environment, as all three teams shared a few laughs.

Jaimie Clarke and Matthew Webb of Nova Scotia were second after the pattern dances, but dropped to fourth (81.44) after the free. However, their score for the free dance was a new personal best (53.22).

Christina Carreira (15) and Simon-Pierre Malette-Paquette (19) of Québec were able to move up to fifth overall (80.91), but the result was still a bit of a disappointment after they spent the first part of the season winning most of their events.

All in all, the novice dancers put on a terrific competition, with strong programs all the way through the ranks. It is evident that Canada has the depth to continue producing strong international dancers for years to come.