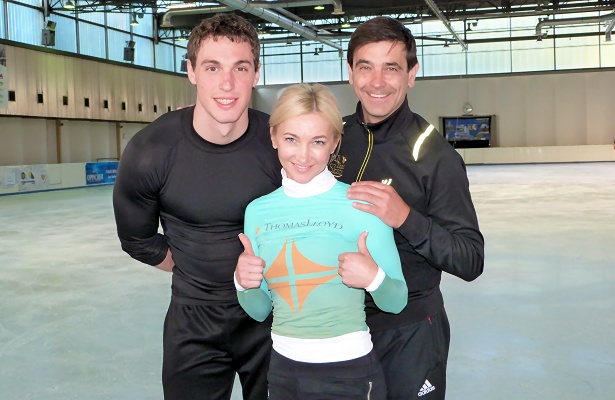 Aljona Savchenko flies high through the air before she lands safely in the strong arms of her partner. This is something you can observe almost every day in the practice rink of Chemnitz, Germany, yet everything is different. Since April, Savchenko, now 30, has been practicing with Frenchman Bruno Massot, 25.

Savchenko, along with former partner Robin Szolkowy had just claimed their second Olympic bronze and fifth World title in February and March, respectively. Afterwards, however, Szolkowy informed his partner that he was retiring from competition and no longer wished to perform in shows as well.

As a result, the organizers of the show “All That Skate” in Korea agreed to invite Savchenko and her new partner, and so they had to quickly put together two show numbers, hence, their quick start.

The new team is working on lifts, spins, throws, and solo jumps under the guidance of coach Ingo Steuer. Obviously, things are not perfect yet, especially in the throws and the pair spin where the skaters are still adjusting to each other. Nevertheless, the potential of this team is huge, and there is only three and a half years left before the Olympic Winter Games in PyeongChang.

“It is difficult when the technique of the partners was completely different before,” said Steuer. “Still, I see a process that is moving forward. It is realistic that we set the goal for ourselves to fight for the gold in Korea.”

“At the beginning, it was of course hard to combine the different skating styles, but Ingo managed that,” Savchenko clarified. “It was an adjustment, because the technique is different. The throws obviously are different, the different height, the timing, all of that was so odd.”

Massot is about ten centimeters taller than Szolkowy and he is a more active thrower, according to Savchenko and Steuer.

“The problem was to control this,” Savchenko explained. “The height and the turns were completely different. I had to do nothing and I did three turns.”

“Now that we have been skating together for two months, we are trying to adjust to each other and to find the technique that suits us best and suddenly things are a bit harder,” agreed Massot. “We sometimes have trouble with the twist, but in general it is easy. There is a problem with the throws. She tells me constantly that she is flying higher and further. She needs less energy but more control.”

Savchenko and Massot had their first public appearance in the shows in Korea in May, and were well received. They even did a throw triple Salchow. However, it is a long way from a skating show to the Olympic Games, and nobody knows this better than Savchenko.

The ambitious skater is willing to do everything to realize her dream of Olympic Gold and thinks of risky, but spectacular, elements such as the throw triple Axel and even quad throws.

“I think a shift in pair skating is coming and that we’ll see more quad throws,” said Savchenko. “However, you need to have everything else. It doesn’t help if you do the quad and that’s it.”

Massot is motivated and ready for the challenge.

“We agree that we want to show things that nobody has seen before, whether these are throws or lifts,” he noted.

“It is important to start working on the technique in a way that we can do triples and quads at the end,” commented Steuer. “Our training is aiming 100 percent at this.”

Savchenko and Massot have time to get ready as they have to sit out twelve months following the 2014 World Championships. Both competed in Saitama, Savchenko for Germany and Massot for France. The skaters feel that this year is actually a benefit for them.

“We have more time to prepare so we can come with the big stuff to our first competition and can impress the world from the very beginning,” offered Massot.

At press time, the question still was open for which country team will represent. Germany or France? Both prefer to compete for their respective country.

“I would (like to continue for Germany) since I’ve changed (countries) already once,” explained Ukrainian-born Savchenko. “It would be a shame [as] there are many fans (in Germany).”

“If I have the possibility to continue representing France, I would prefer to skate for France,” said Massot, “but I see that we have very good practice conditions (in Germany) and the chance to go to the Olympic Games and win medals.”

Finances will play the decisive role. Currently, Steuer, 47, cannot not receive official funding in Germany due to his past history as an informant of the East German Secret Police (Stasi) in his youth, almost 30 years ago. Recently, the German NOC president Alfons Hörmann said repeatedly said that he hopes that a solution can be found to keep Savchenko and Steuer in Germany.

Meanwhile, Steuer is coaching the team without being paid, while Savchenko still receives financial support as a national team member. Fans of Savchenko have started a petition asking the Ministery of Interior Affairs to lift the ban so that Steuer can receive funding from the government as other coaches in Germany do.

Editor’s Note: The ban on Steuer was lifted July 21, 2014 following a hearing led of the independent Stasi commission of the German National Olympic Committee (NOC).

“Taking into consideration the personal development of Mr. Steuer in the past years and 25 years after the end of the GDR and his contacts to the state security, the commission has no further objection against Steuer being hired as a figure skating coach by the German Skating Federation,” the commission told Ingo Steuer and the NOC on Monday.

Massot gets nothing. France has assured financial support for the pair once Savchenko is released, but obviously, the German Skating Union is reluctant to let their best athlete go.

Steuer and his skaters were hoping for a decision soon to make plans for the season. The coach also has offers from other national skating federations, but he didn’t want to name them. In any case, Savchenko and Massot are hoping to perform in some skating shows in the fall and their first competition as a team probably will be Nationals – in Germany or in France.