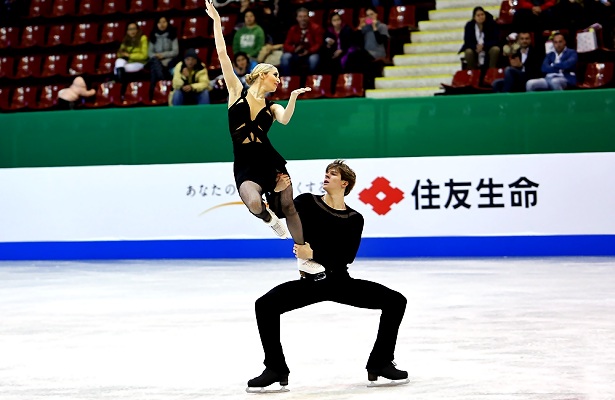 Russia’s Anna Yanovskaya and Sergey Mozgov are one of the most promising ice dance teams at the junior level. Last season, the young Muscovites won every single grand prix, including the Final, but were upset by USA’s Kaitlin Hawayek and Jean-Luc Baker at the 2014 Junior World Figure Skating Championships.

Although their season ended with Junior Worlds, the skaters didn’t take a break.

“We were really busy in March and April,” explained Yanovskaya. “When we came back from Sofia (Bulgaria, the site of Junior Worlds), we had just one day off. The next day we went out on the ice again to practice.”

The dancers were also busy with school, successfully completing their exams. Yanovskaya will start university in fall and Mozgov has entered his fourth year of studies.

In May, the skaters had two weeks off. Yanovskaya spent her vacation with her family in the Dominican Republic, while Mozgov went to Egypt. Refreshed, they returned to work and travelled to a training camp in Latvia with their coaches Elena Kustarova, Svetlana Alexeeva, and Olga Riabinina.

The theme for the short dance for the Juniors in the upcoming season is Latin American rhythms with the “Silber Samba” as the pattern dance part. Yanovskaya and Mozgov are excited about this rhythm.

“We really like it. To us, all rhythms are interesting that we didn’t dance yet to, and the Samba is one of them,” Yanovskaya, 17, pointed out. “Historically, the Samba is a festive dance, the Street Carnival that combines people with different rhythms, with the character of having fun, flirting, and playing with each other. We will try to deliver the whole multifacetedness of this ‘South American Waltz’.”

“For the free dance, we have already some interesting results,” said Yanovskaya, adding that they are not yet ready to reveal the music choices.

“We chose our theme for our dance together with the coaches,” Mozgov, 19, explained. “We had several different ideas. We hope that our choice and the choreography will be interesting for the fans and, hopefully, will be appreciated by the judges.”

“We can already confidently say today that we are putting our soul into the program and therefore our dance will be filled with soul,” offered Yanovskaya.

The athletes decided to compete at the Junior level exclusively.

“We want to do everything step by step and accurately, therefore we plan to continue in juniors,” Mozgov pointed out. “We want to use this year to its fullest and reach the maximum on all levels.”

“Yes, we decided that we will go far and only together, hand in hand, supporting each other always and in everything,” agreed Yanovskaya. “This is the only way for us.”

For the next few months, the team from Moscow has ambitious plans off the ice as well.

“We’ll put a serious focus on studying English,” Mozgov shared. “We’ll dedicate attention to cultural education, to the history of dance, to the development of dance culture, including ice dance.” “We also want to do some charity work for orphans,” added his partner.

With the Olympic Winter Games just held in their home country, the World Junior silver medalists are obviously not losing sight of their goal – the Junior World title.

“Motivation? Of course!” said Yanovskaya. “We want to represent Russia honorably, we want to keep the level set by the Russian team in Sochi, and we want to become medalists at the 2018 Olympic Games.”