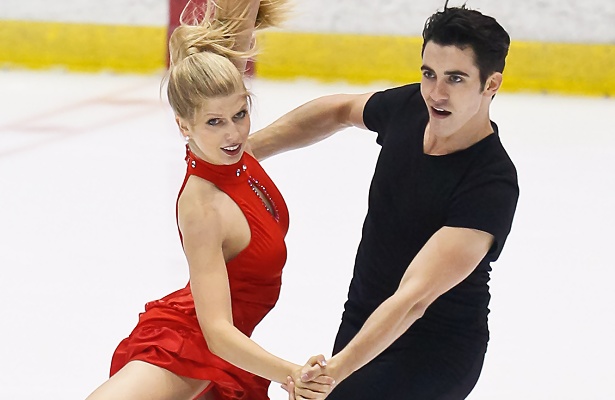 USA’s Holly Moore and Daniel Klaber recently competed at the 2014 Ljubljana Cup in Slovenia where they finished a strong third with 129.26 points.

“Our time in Ljubljana was surely a whirlwind and we had a blast!” said Moore. “Overall, we are very pleased with how we skated, as well as the results.”

The team was able to meet some of their personal goals such as receiving the first level 4 of the season in the Samba pattern of their short dance, as well as a new personal best for their free dance and total score.

“We have plenty to work on before our next outing, though,” acknowledged Klaber. “Coming into this event, we knew that one of our lifts (the rotational lift) was a bit iffy as far as levels go.”

“After not getting the level 4, we quickly realized it is too big of a risk internationally,” noted Moore. “Now we know we must change it if we want to pull up, but hey, it happens! Ultimately, we are very happy with what we have accomplished, and we hope we made Team USA proud!”

The two-time U.S. junior pewter medalists switched coaches back in March, and are now training under Igor Shpilband, Adrienne Lenda, Greg Zeurlein, Fabian Bourzat, and Barbara Fusar-Poli. The change was not a decision they took lightly.

“This is the beginning of a new quad and we had to look at what we needed in order to move towards our ultimate goals,” said Moore. “We took into consideration the feedback we have gotten over past couple of years from judges that we really respect. It all came down to the same thing; we are strong performers, and always engage with the judges and the audience, but we need to keep working on the technical aspects of our skating.”

“We have loved working with all of the coaches we’ve ever worked with, but we feel we’ve also recognized when it’s been time to make a change and bring a different aspect to our skating,” explained Klaber.

Moore, 18, and Klaber, 20, got their start at the Pavilion Skating Club in Cleveland Heights with Jackie Miles, Michael Farrington and Chip Rossbach who took them to their first national title at the novice level. They later moved to the Detroit Skating Club where they trained for the next seven years.

“Working with Angelika (Krylova) and Pasquale (Camerlengo) took us to the next level, and when Massimo (Scali), Liz (Swallow) and Natalia (Deller) became part of their team, we gained something from each of them,” said Moore. “We couldn’t be more appreciative of them. They helped us to create programs that showcased our personalities; thus, they helped us to gain a reputation of being great performers.”

“After placing fourth at the junior level for the past couple years, we had the realization that we had to buckle down,” explained Klaber. “We needed to work on the technical aspects of our skating, and refine and deepen our performance quality.”

“This is a completely different environment than we’re used to, but it’s what we need right now,” added Moore. “We are starting a new chapter and what we are learning has taken us in a vastly new direction. We are re-energized and training in new and different ways, and based on the feedback we have gotten so far, we feel like we can accomplish what we hope to this season.”

Over the summer, Moore and Klaber increased their training time in order to prove they are a top team this year.

“We are confident in saying that our new training environment in Novi, Mich., is exactly what we need to propel our skating careers,” said Klaber. “We believe we are being provided with exactly what we need in order to take our performance and technical skills to the next level.”

After months of uncertainty due to the potential age change for juniors, the ice dancers will compete another year at the junior level, both nationally and internationally.

“Last year we won our first international medal and placed fourth in our second assignment,” noted Klaber. “We just missed the world team and we are determined to make up for that, actually, more than make up for it.”

“Our goals are higher than ever this season,” agreed Moore, “and we are eager to prove ourselves as a top team both on the national and international stage.”

“We are extremely motivated and are confident that our hard work will translate to our programs,” said Klaber. “Hopefully, our programs this year will allow us to connect to the audience through our performance and showcase our technical improvements.”

“This season we want to come back as a whole new team,” added Moore. “We have been putting in more hours than ever day in and day out to achieve this goal.”

Their short dance is to a Shakira medley, while the free dance is to music from the Addams Family.

“Our programs showcase more maturity and skill than our past programs, and the characterization of the programs demonstrate both of our personalities,” said Moore.”

“Susan and Steve McFeran work with us in ballroom and choreography,” said Klaber. “We also work with Michael Lee (mime) on our expression and the portrayal of our programs.”

“I have been admitted to the School of Kinesiology at the University of Michigan, and I am beyond excited to start as a freshman there this fall,” she said. “I’m excited about attending the U of M football games this fall, and I can’t wait for classes to begin!”

“The University of Michigan is one of the best universities in the world, so I know it will be tough,” admitted Moore.

Moore, who attended traditional high school for four years, has learned how to effectively balance academics a rigorous training routine.

“I have great role models in ice dance who have managed to balance U of M, while maintaining their spots as top world competitors,” she said. “Go Blue!”

Over the summer, Klaber took a trip to Colorado Springs.

“I got to see friends, skate a session with some friends for fun, climb some mountains, and even saw the sunrise over The Springs,” he said. “Since then, I’ve spent most of my time working or skating, really buckling down in my new environment as I begin to transition into be self -dependent.”

“However, I’ve managed to get in my fair time of tanning, swimming, boating, being lazy and had a few trips to Cedar Point,” he added. “Overall, it’s been a pretty good summer.”

Moore and Klaber will compete at their second Junior Grand Prix in Tallinn, Estonia, later this month.