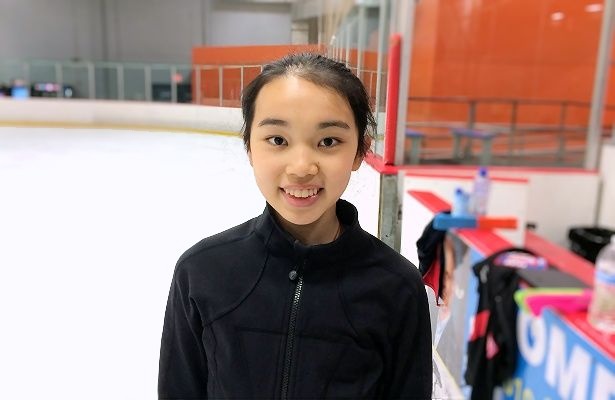 “I’m very happy about my placement,” she said. “I knew I could have done much better because my warm up and practices went well, but it just didn’t happen this time.”

She placed a solid first (60.68) in the short program, but underrotated several jumps and fell on her triple-triple combination to finish fourth (100.27) in the long.

“I was a little nervous, so I wasn’t really attacking as much as I usually would,” said Chen. “One thing I learned from this competition is that I need to go out there and fight for it.”

“I was very happy with Karen’s first JGP this year,” said her coach, Tammy Gambill. “She skated a great short program and was practicing strong every day. She had a couple of mistakes in the long, but I am confident that this will make her even more determined the next time.”

Chen is skating to “Escala” from Clint Mansell’s Requiem of a Tower for the short program, and music from The Godfather soundtrack for the long. Both routines were choreographed by Justin Dillon and Cindy Stuart.

“Watching the beauty and elegance of ice dancing team was what inspired short program,” explained Chen. “The program and music combined is quite dramatic and emotional, so I am hoping that the emotional aspects of the performance comes across for the judges and the audience alike.”

The skater previously used “The Godfather” for her long program when she was a novice.

“The music is quite strong and fierce, so I am working on my facial expression to engage everyone’s attention,” said Chen, adding that she feels her artistry has improved since last year.

Last season, Chen placed third and first at her JGP events in Latvia and Slovakia, respectively, but then broke her right ankle and had to withdraw from the JGP Final.

“It was a type three tibia fracture,” she explained. “I was put in a cast and boot for two months. It seemed like the toughest two months of my life.”

However, it only got more complicated. Recovery wasn’t as easy for the skater as she first thought.

“I literally had to relearn all my elements in two weeks before nationals,” said the 15-year-old, who trains in Riverside, Calif. “I tried so hard to recover that I ended up overworking my body which led to pains in my hip and quad area.”

The skater, who is competing as a senior this year domestically, placed fifth in the short program at the 2014 US National Figure Skating Championships, but then had to withdraw.

“It broke my heart,” she said. “Obviously I wished that I didn’t break my foot, but it’s all a learning experience. I learned a lot; no matter how strong or perfect you are, if you are injured, there is nothing you can do.”

Gambill said Chen was very determined to try and get ready for nationals, but she just didn’t have enough time to get fully prepared.

“I was amazed at what she accomplished in such a short amount of time,” said the coach. “She was very disappointed when I made the decision to withdraw her, but she understood that it wasn’t worth another injury to push through it.”

Chen recovered enough to compete at the 2014 World Junior Championships in Sofia, Bulgaria, where she finished a respectable ninth overall.

This year, Chen’s goals are to land consistent triple-triple combinations, and she would also like to start working on the triple Axel again.

“Most importantly, I want to stay healthy and injury-free,” said the 2013 JGP Kosice champion. “I plan on making it to nationals and being able to perform my best.”

Over the summer, Chen took a week to visit family in Taiwan where her grandparents and most of her aunts and uncles live.

“This trip to Taiwan meant a lot to me,” said the teen from Fremont, Calif. “Nothing is better than spending time with my loving grandparents. Looking back, I wish I could have spent more time with them.”

The high school sophomore can speak and understand Mandarin fairly well, but is unable to read or write it.

“Since both my parents are Taiwanese, I understand Taiwanese, but can only speak a little of it.

One of Chen’s favorite pastimes is to cook with her mother.

“I am a total foodie,” she laughed. “I love everything involving food. I also have had a recent obsession with Food Network TV shows such as Beat Bobby Flay, Cutthroat Kitchen, Chopped, and more!”

Chen’s other passion is art and has several of her works on display at her website.

“I love to paint and do other crafty things,” she said. “I like working with oils, paper, and mixed media.”

Chen will compete at her second JGP  next month at the 2014 Croatia Cup 2014 in Zagreb.

“I played it safe in the short program at my first JGP by not doing a triple-triple,” said Chen, “so I my goal in Zagreb will be to try to implement it. Mostly, though, I want to have two clean skates this time.”