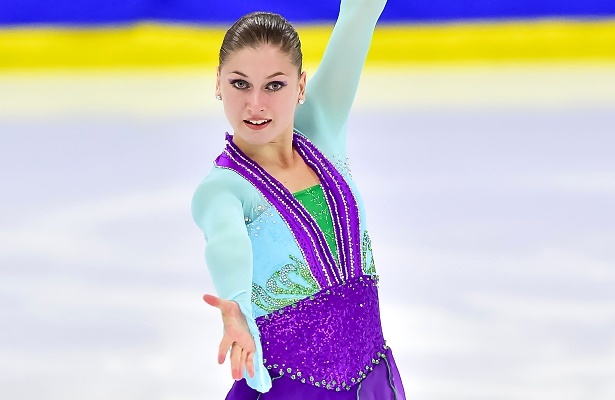 Kim DeGuise Léveillée of Canada competed in her first Junior Grand Prix (JGP) event in Ostrava, Czech Republic, earlier this month where she finished eighth. Overall, the skater was happy with her performances, but disappointed with her Lutz jump in the short program.

“I got an edge (call) on the Lutz in the short, but only a “!” (unclear edge) in the long, so I was happy!” explained the skater. “I’m just starting to land my Lutz more often, so the goal was just to land it.”

The Canadian junior champion, who is now coached by Josée Picard, has been working hard in practice to get to this point, and feels it is now starting to pay off.

“I also saw really good skaters in Ostrava, and that motivated me to get back to training fast,” said the skater.

DeGuise Léveillée will compete again in a few days at her second JGP in Dresden, Germany, and wants to get a third combination in her long program.

“Maybe a triple-triple or something to improve the second mark,” she said.

The skater is also excited about competing as a senior on the national level this season.

“Since I was little, I’ve always wanted to be there doing triples,” she said. “I would like to be in top five at nationals, but I know I have to work hard to reach that goal.”

DeGuise Léveillée took a big leap towards that goal when she won the junior title at nationals last season after placing 17th the year before.

“Last year, my dream was to win, but my realistic goal was to be on the podium,” she recalled. “I remember working really hard on days where things were not the way I wanted and thinking about my goal to push myself. My coaches also helped me a lot.”

The young skater was already content with her third place finish after the short.

“All year I had trouble with starting competitions with a good short, so I was happy that it went well and excited about the long,” said the 16-year-old. “My thought was “give it all” going into the long, because I had nothing to lose. I knew I had to give everything to be happy about myself.”

And give it all, she did, landing three clean triples (including a triple toe-double loop), two double Axels (one in combination) and earning level 4 on all three of her spins.

“It was like a dream,” said DeGuise Léveillée. “I was crying and screaming… It was a moment I will always remember. I was thinking of all the obstacle and challenges I went through up to there, and I was just extremely happy.”

This season, the Québécoise is focusing on skating a clean free program with six triple jumps.

“I’m actually working on a triple toe combination, but I don’t have a fixed choice yet,” she said. “Last year when I arrived with Josée in March, I only barely had my triple Salchow. By the end of July, I had my triple toe, loop and flip, but I wasn’t ready enough to go to Skate Detroit, and I didn’t get a Junior Grand Prix.”

“My coaches are all important to me,” she emphasized. “I think that the fact they are a team is great because they all bring a little something to my skating. They work as the BEST team. This year, each of them helped me so much to win the junior nationals and make my dream come true. I feel so much gratitude and respect for them.”

The teen from Sorel-Tracy changed schools after spring break in order to be closer to the rink in Chambly, Que.

“The rink is about one hour from my home, so I am traveling every day,” she said. “It’s a lot, but it’s important for me to stay home with my family. I really like training there so it’s a choice I made to travel like this.

“The place I train is nice, and the team CJP+ (name for Picard and the rest of the team) is fantanstic!” added DeGuise Léveillée. “The skaters are all close to each other, so we encourage ourselves, and it’s fun!”

Since spring, the skater feels her jumps have become more consistent.

“My Lutz is also way less ‘flutz’ than before, which is a good thing,” she laughed.

“We are trying very hard at this point to work on new jumps seeing as how last year was Kim’s first year to master new triples,” noted Picard. “She didn’t really have any of them before. We have now six triples planned in the program, and we are working on being able to do more throughout the year.”

Her coaches are also spending more time working with the skater on her skating skills and her basic stroking.

“I want to improve my transitions and the quality of my skating,” said DeGuise Léveillée. “I think that this makes all the difference between a ‘good’ and a ‘really good’ program. I am also trying to get a level 4 in my footwork and in all my spins.”

“If all goes as planned, we can keep adding technical difficulties as the rest of the skating will improve,” added Picard.

The skater would like to achieve a combined score of 150.00 points for her short and long programs by the end of the year.

“I think that number would represent two clean programs,” said DeGuise Léveillée. “It would also represent devotion, commitment and hard work in training.”

This season, DeGuise Léveillée is skating to My Sweet and Tender Beast for the short, and music to the Last Emperor for the long. Julie Marcotte choreographed the short, while Shae Zukiwsky did the long.

“My short is a really calm and romantic waltz,” she said. “My long is ‘zen’ and also calm. Both my long and my short music were chose so I can curve and bend my knees more to improve my transitions and skating skills.”

The high school graduate enrolled at CEGEP last month, and is studying to become a lawyer. When she’s not training or studying, she likes to read, play video games, watch movies and run.