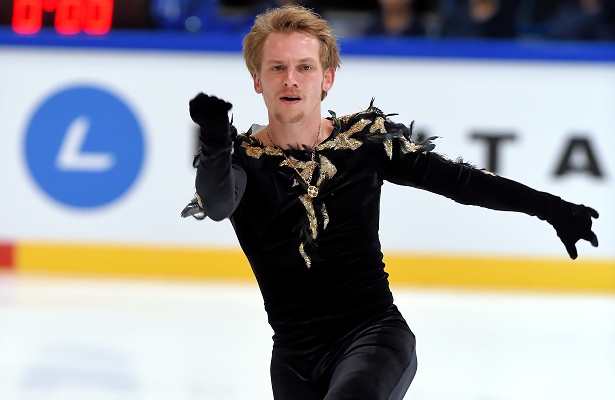 Russia’s Sergei Voronov, who turned 27 on October 3, is one of the older figure skaters on the circuit, but he did not consider retirement following the Olympic season.

“On my national team I have bright examples, therefore I can say that I am basically still a junior,” he said, laughing, referring to Evgeni Plushenko and Konstantin Menshov, who are in their early 30s. “I enjoy what I am doing. My career is not over yet. I want to prove that I am not a wimp. I want to continue my career for a long time, as long as my health allows it. I have the desire and I haven’t won that much yet.”

The two-time Russian gold medalist got his second wind when he changed coaches in the spring of 2013 and joined Eteri Tutberidze’s group in Moscow. He had trained for several years in St. Petersburg under Alexei Urmanov before switching to Nikolai Morozov in 2010. The skater was actually turned away by some coaches during his search in 2013, until he met Tutberidze.

“At first it was difficult for me to skate in Tutberidze’s group, to get a grip on myself, to do run-throughs every day,” recalled Voronov, who found himself training with a group of young skaters. “I did not understand how this was possible.”

While he felt a bit out of place, he noted how the change pushed him to train harder.

“We have a lot of good juniors, boys and girls,” he said. “When I am look at them, I feel rejuvenated. I do not feel like I am 27 years old.”

The ‘slave labor’, as Voronov once jokingly called his training, paid off. He won silver at the European Championships in Budapest in January 2014—his first medal at the event after competing in it five times since 2008. Although Voronov was the highest ranked Russian man at Europeans, he was neither selected for the Olympic Games (Plushenko went and withdrew before the short program in the individual event) nor for Worlds (Russian Champion Maxim Kovtun was sent).

Voronov got busy right away at the beginning of this season. He first won a national Russian competition in Samara before finishing fourth at Nebelhorn Trophy at the end of September in Oberstdorf, Germany. During the second week of October, the Muscovite traveled to Espoo, Finland, where he captured the title in his fifth appearance at the event.

For this season, the three-time Grand Prix medalist worked for the first time with Alexander Zhulin as a choreographer, and is skating to “Danse Macabre” by Camille Saint-Saëns for the short program.

“This is a tragic, fateful program,” Voronov explained. “For some reason I always associated the music of Saint-Saens, the “Danse Macabre,” with the tragic story of a swan. It is just my personal feeling that it is a swan that is dancing for the last time.”

While the “Danse Macabre” is close to Voronov’s more classical style, the long program to “It’s a Man’s World,” “Come Together,” “At Last,” and “Big Time Boppin” is a new style he has never done before.

“It was Zhulin’s idea,” said Voronov. “He wanted to do something bluesy, modern. To be honest, I did not believe in this [program] for a long time. I like Tango or classical pieces, serious ones. Something like this, I thought at first, I cannot interpret well, but it seems to have worked out.”

However, he did have to make an adjustment and changed the first part of the music following Nebelhorn Trophy, using “It’s a Man’s World” instead of “Memories of Caruso”.

“This blues version of “Memory of Caruso” is quite nice, but in these first two competitions, I did I did not feel it,” Voronov explained. “I told Viktor (Adoniev, one of his coaches) something is not right. I simply did not get what I was skating to. For me, the program starts with the footwork, with “Come Together,,” which I understand really well. This is the hippie time. I don’t have a problem with it and there is no question.”

“So we started to think about it and my girlfriend, Diana, suggested “It’s a Man’s World” to me,” he continued. “It is strong music and I think it really suits the theme of the program. It has meaningful words and it really suits me well emotionally.”

Despite competing at the international level for ten years, the figure skater does not feel burned out.

“It is for sure that I am not tired of competing, otherwise I would not compete in my third event at the beginning of October,” said Voronov. “How can you get tired of high-level competition? Maybe this will happen sometime in the future, but now this is my life. I arrive, see new people, a new country, a new city, and I have new feelings and emotions. Finland is not new, of course, but it is a tradition that we go to certain places each year, which is great. For me, this is moving forward.”

However, he is not sure if competing gets easier with experience.

“Since the past season, I have completely different feelings,” Voronov said. “I recall my junior successes and mishaps. It was somehow different. Now it seems to be more on an intellectual level, there is no unawareness. You go out and you know exactly your job and it is a job that you like, although you sometimes work like you were cursed.”

Since joining Tutberidze’s group, each hour of Voronov’s days is planned with little, if any, spare time. The skater gets up at seven in the morning and drives two hours to the rink where he spends his day practicing on and off the ice.

“This goes on for six days a week, and our only day off is Friday,” he said. “I think this is the lifestyle of each professional athlete, no matter if it is figure skating or something else. Obviously you sometimes get tired mentally, morally and physically, but I think all problems come from the head. If you are morally rested, you are fine. For example, I try to get out into the countryside on my day off in order to get as far away as possible from Moscow, from the people, in order to put it all aside.”

Voronov, who is currently is scheduled to compete at Cup of Russia and NHK Trophy, considers his first competitions of the season as important preparations.

“I need to go to the Grand Prix in the best possible shape,” he said. “These competitions predetermine what will be at the Grand Prix. I hope that my work, and it is not only my work, but the work of my whole team, will lead to a good result at the big events.”

“I’m not saying that these (Nebelhorn Trophy and Finlandia Trophy) are meaningless competitions,” the athlete added. “At each competition you are living through a little life. For me, it is like that because I am giving a 100 percent at each competition. I am going into each competition with nervousness, attitude of mind, and I am always ready to put out everything.”