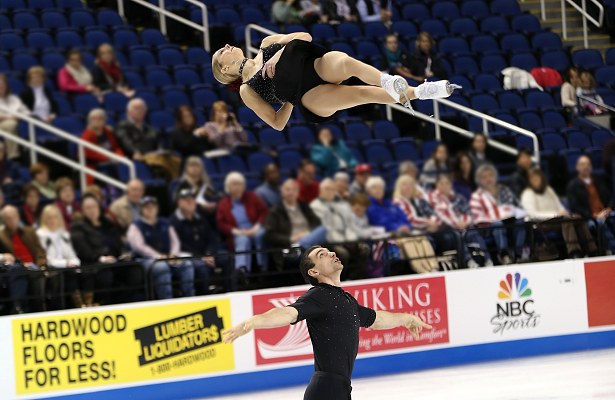 Alexa Scimeca and Christopher Knierim, who teamed up less than three years ago, captured their first national title on Saturday at the 2015 U.S. Figure Skating Championships in Greensboro, NC.

The road wasn’t an easy one. Knierim broke his fibula during practice in July 2013 and then had surgery just this past March to remove a plate and screws in his leg that was causing discomfort. Time was their enemy last season as it prevented them from progressing as they did their first season together.

“At this point in our career the injury is behind us,” said Scimeca. “Chris is 100 percent back to normal. The injury was a hard process, but it really brought the team closer together. It affected our training preparation for the Grand Prix and Nationals (last season), so we had to really rush getting Chris back on the ice.”

“We do not blame the injury on any of our past poor performances,” she added. “We recognize things happen and you need to figure out how to keep moving forward and keep your eyes on the prize.”

Over the summer, the team, coached by Dalilah Sappenfield and Larry Ibarra, hunkered down and began increasing their lift and twist difficulty.

“We are trying to take more risks this season in order to be prepared in four years to make the 2018 Olympic team,” said Scimeca. “We are allowing the next three years to be learning years, so that we can have all the tools we need to be medal contenders at Worlds and the Olympics.”

This season, the team’s goals are to improve their power on the ice and unison throughout their programs.

“We have been focusing on small details,” said Knierim. “We want to be competitive with the top international teams in terms of their skating skills and refinement.”

The 2014 Four Continents bronze medalists opened their international season with the 2014 U.S. International Classic and Nebelhorn Trophy, where they placed first and third, respectively. Afterwards, they took fourth place in both their Grand Prix events at Skate America and Trophée Éric Bompard.

In Greensboro, Scimeca and Knierim skate a flawless short program to “El Tango de Roxanne,,” which featured a strong triple twist, as well as solid side-by-side triple Salchows and a throw triple flip. The team also earned a level four on all other elements, earning a score of 74.01.

While the team was happy the five-point lead going into the long, they acknowledged that their next skate had to be just as spectacular. As a team, both skaters love to perform programs with a charismatic feel, however, Knierim prefers the short program.

“I think it’s the music,” said the 27-year-old. “I get a rush of energy when I hear it, especially at the end when I’m tired. I always get more energy. I really like that strong, stern type of music.”

“It’s funny because Chris, being so quiet, you wouldn’t think the short program would be his style, but actually it brings out a different side that the world doesn’t see,” added Scimeca, 23. “It’s really cool.”

The skaters, who were engaged in April, have a playful and fun off-ice relationship and felt that their long program to music from An American in Paris program would let fans see them in a different light.

“We like the multiple changes of music in the program,” said Scimeca. “Last season, our music was very similar from beginning to end, and this new program has many pieces meshed together. We also love training this program because it is the complete opposite of our short program. The different genres in music are helping us to grow as performers and reach new limits in our career together.”

Last season, some may have felt that Knierim appeared aloof during performances.

“I think maybe if Chris came off uninterested last year, (it’s because) he had a really tough recovery from his foot,” Scimeca explained. “Looking back, he said he may have rushed it and would do it differently if it ever happened again. For him, it was just a really tough mental battle for him throughout the whole season. So coming into nationals, he had a lot on his shoulders and once he got the metal removed from his foot, he has been ready to go and he’s let the tiger out.”

Aside from a single Axel in a double Axel-double Axel sequence, the 2014 Nebelhorn bronze medalists laid down a solid long which was highlighted by a quadruple twist that garnered positive grades of execution (GOE) across the board. It was the first time a U.S. pairs team had performed the element in competition.

“For me, it was a relief right after we got it done,” admitted Knierim. “It was the first time we’ve done it at a competition, so there was definitely some nerves. I take a lot of pride in the twist, so if anything would have happened, I would have blamed myself for it. I’m real happy we kept a cool head and got it done.”

“I didn’t even really think about it twice, because I was already moving into a triple sal (Salchow), which obviously has been a battle for us,” added Scimeca. “(Throughout the) whole program I was staying in the moment and I didn’t even recall the twist until I saw it on the replay.”

Their side-by-side triple Salchows were also solid, as was their throw triple loop and flip. The only other flaw was a slight slip during a dismount in their final lift.

“I got really excited in the end and almost fell,” Scimeca explained with a chuckle.

“I was super shocked by the scores, as you can see by my face,” said Knierim. “We’re just happy we got the quad out so we got a little under our belt now for the next competition. That was the biggest thing we got done here.”

“Normally when you see people win a national championship it looks so easy, but that program was a nail-bitter for me,” admitted Scimeca. “It was just hard. I had to be really in the zone when we were going through it.”

While the quad twist is “more for the future than for nationals,” the team had planned to do the element regardless of how their short program went.

“It is in the program no matter what,” confirmed Knierim. “If this was sectionals, we’d still be doing it. There is no reason for us not to do it. We want it for next year and we want it for Worlds and Four Continents if we get the opportunity to make those this year.”

And make it they did. The team will compete at both events later this season, alongside Haven Denney/Brandon Frazier and Tarah Kayne/Daniel O’Shea (Four Continents).

“The U.S. pairs need to be more competitive with international teams,” noted Scimeca. “I think if the U.S. teams are capable of stepping it up in any type of element, they should start going for it so we can be more competitive and hopefully by 2018, we’ll have some teams in the top five … three.”

When asked if there was a quad throw in the future, Scimeca replied, “I don’t know. We weren’t thinking of the quad twist at Skate America (in October), and it’s here now. We just kind of go with the flow.”