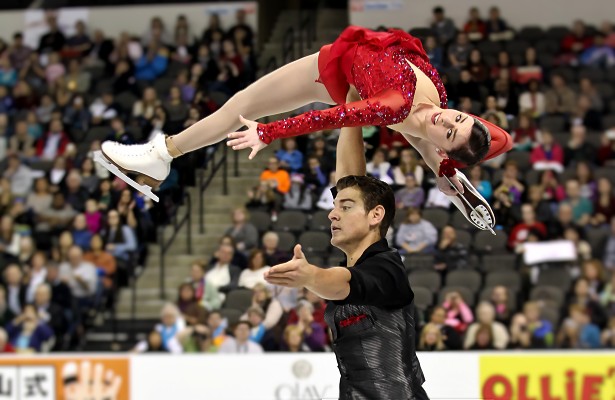 USA’s Haven Denney and Brandon Frazier perform a lift in their short program to “The Godfather”.

USA’s Haven Denney and Brandon Frazier plan for the 2014-15 season was to improve their season’s best scores, as well as get higher component marks while improving their overall skating skills. They nearly accomplished the first goal as they placed second at Skate America, earning a personal best in the long program, but missed the podium at the Rostelecom Cup in Moscow by a mere tenth of a point.

“My personal goals for this season was to just enjoy the reason why I got into this sport,” said Denney. “When Brandon and I were little, we competed on roller skates together. We are the best of friends and we have a bond and a saying that we share: There is no ‘I’ in TEAM. We take our winnings and losses together and the sport is something we do together.”

While the Skate America silver medalists did not qualify for the Final, they used the time to train for the 2015 U.S. Figure Skating Championships where they finished second behind Alexa Scimeca and Christopher Knierim.

“When we started this season, we had no expectations,” said Frazier. “The way we went into this season, we just wanted each performance to be better than the one before.”

Denney, 19, and Frazier, 22, went on to compete at the 2015 Four Continents Figure Skating Championships, where they finished seventh.

“It was a tough competition for us,” admitted Frazier. “We were pretty tired going into it, still trying to come back from nationals, which was a big emotional roller coaster for us. It’s always tough to go down and come back up to be at your best within two weeks. It was good in some ways, but was not our best.”

Going into their first World Championships, the team focused on maximizing their technical levels. They scored a new personal best for their short in Shanghai, China, however, encountered problems in their long and finished 12th overall.

“For it being our first worlds, it was all about learning,” said Denney. “We are grateful to have the experience, but our free skate could have been much better.”

“Anyone would be disappointed to come in well-trained and not put out the free skate they know they could,” added Frazier. “It was a great season overall, but that day we didn’t get into the way we normally perform this program. It was disappointing.”

“The facility is state of the art  and has welcomed us with open arms,” said Denney. “We couldn’t be more thrilled and are excited about working with Ingo in this new environment.”

“Working with Ingo has been amazing,” said Frazier. “His work ethics match ours and he is clearly dedicated to coaching. His coaching is at a high level, and both Haven and I are hard workers and want to reach our maximum potential. We like to work hard, but Ingo also works hard as well, so we make a really good team all the way around.”

Both skaters are acclimating to the new training regime under the renowned coach, who led Germany’s Aljona Savchenko and Robin Szolkowy to two Olympic bronze medals, as well as multiple world and European titles.

“He is not only enhancing what we have and working us hard, but is helping us to relearn our mentality on how we approach our training,” offered Frazier. “His coaching makes so much sense as to how over time we can reach our full potential. Also, I’m a visual person, so his style really melds with how I learn things.”

“He has a unique approach to ensure we have all the tools we need to maximize our results,” added Denney. “He gives us 100 percent of himself when he is coaching us both on and off the ice. His work ethic is unbelievable and we feel very fortunate to be working with him.”

The U.S. silver medalists feel they have many years to compete and their bodies are still young, so they are challenging themselves to develop the harder throws and difficult lifts. The focus now is to skate cleaner programs, improve their skating skills, and continue to get higher program components.

Prior to the grand prix season, the team had been working on a throw triple Axel and throw quad Salchow. The skaters intend to pick it up again and see how it progresses before they make a determination on whether the elements will be used this season.

“We will also look at adding another side-by-side triple jump, as well as improving the consistency of our triple Salchows,” said Frazier.

“Harder technical elements is a process that we understand takes patience and time,” observed Denney. “We are not in it for immediate success, but for the long term, and to develop into an elite pair team. We want to stretch and grow has performers and continue to expand our boundaries.”

The skaters also plan to have a bit of time to themselves for this summer. Frazier plans on doing some jet skiing, playing paint ball with friends, and participating in poker tournaments.

“My father taught me to play poker at a very young age and I enjoy playing when time permits,” he said. “I also plan to play lots of tennis over the summer.”

Denney intends on going to Disney World, spending time with her family, and boating with her grandfather.

The team will also spend a few weeks training in Chemnitz, Germany, while Steuer spends time with his family and son Hugo.