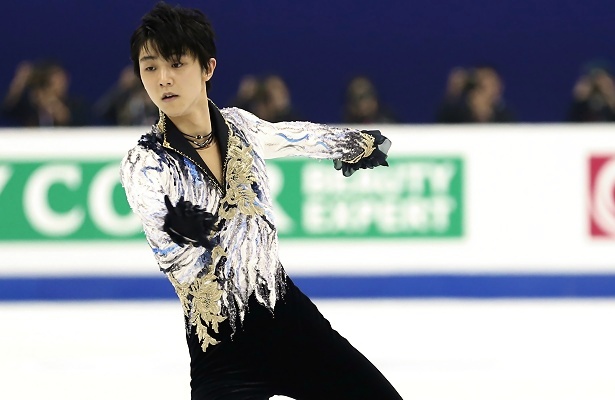 Japan’s Yuzuru Hanyu refreshed his personal best score in the free skate at the 2014-15 Grand Prix Final in Barcelona.

The 2014-15 season was certainly not a mundane one for Japan’s Yuzuru Hanyu, who had a spectacular the year before when he claimed not only Olympic gold, but the World and Grand Prix Final title as well. When asked to describe this past season in one word, he said it would be “experience.”

At the beginning of the season, the 20-year-old had to pull out of Finlandia Trophy, his first international event of the season, due to a back injury. Then there was the warm-up collision prior to the free skate at Cup of China which forced him to rest for two weeks. Though he competed at NHK Trophy, he was not in top form and came in fourth. Nevertheless, he was able to qualify for the Grand Prix Final where he fought for and won his second consecutive title.

Two weeks later, the 2014 Olympic Champion defended his national title at the 2014-15 Japanese Figure Skating Championships, however, the skater had to withdraw from the gala due to abdominal pain which was later diagnosed as a bladder problem. He had surgery and was hospitalized for two weeks followed by a month’s rest per doctor’s instruction.”

“You climb over one wall only to find another,” Hanyu summarized, regarding his abnormal season thus far.

In February, the three-time national champ then sprained his right ankle during practice and found himself off the ice for another two weeks. Due to the unexpected injury, Hanyu never made his way back to his training base in Toronto. Instead, he found himself training alone in Japan without his coaching team prior to the 2015 World Figure Skating Championships, which were to be held in Shanghai, China at the end of March.

While the defending world champion insisted he had recovered physically and was feeling good about delivering a clean performance, the lack of systematic training eventually led to inconsistency on the jumps, especially the quads. As a result, he wasn’t able to defend his world title which was captured by Spain’s Javier Fernandez—his training mate from the Toronto Cricket Skating and Curling Club.

“I think I lost the sense of competition,” reviewed Hanyu after his free skate, “and I wasn’t paying enough attention to adjust my peaking for this event in my training. As a result, I was not able to bring out the best of me. I felt happy for (Javier), of course, but 90 percent of my mind felt regret.”

The frustration came not only because he lost the title, but also because he couldn’t deliver a clean performance of either the short or long program throughout the season.

With this context, the skater from Sendai decided to participate in the World Team Trophy (WTT) held in Tokyo in mid-April. His aim was to finish the season strong by performing two clean programs, but unfortunately, things did not go as planned.

In the short, Hanyu nailed a quad toe and triple Axel, but he fell on the back end of his triple Lutz-triple toe combination. He turned in an inspiring long program which featured a quadruple Salchow and eight triples, but popped a quad toe into a triple, which forced him to change the triple toe later in his program into a double to avoid “zayaking.”

“I have said it so many times (this season), but still I feel very regrettable,” he told the press. “There was not a competition I left with no regret.”

Still, the 2015 World silver medalist was still able to pull some positive out of the all the disappointments from the season.

“I think I am able to land a beautiful quad Salchow in the program now,” he told the press at WTT when asked what his biggest gain was this season. “I have also improved the consistency in run-through sessions during the training.”

Indeed, the landing rate and grades of execution (GOE) on the quad Salchow did improve over the course of the season.

“Whether this season was a failure for me depends on how you see it, but I believe failure is the stepping stone for success,” said Hanyu. “You won’t realize some problems unless you fail.”

“Although there is nothing I can do about the surgery, many of the other things this season is due to my lack of self-management and my lack of attention to my physical condition,” he continued. “I really need to learn how to adjust my condition, even though in reality I cannot bring out the best of me every time, I need to always try to be better and pull out a performance, like at World Team Trophy, or else it will be more and more difficulty to compete in the future.”

After the World Team Trophy, Hanyu returned to his training base in Toronto and prepared the new programs for the upcoming season. In June, he returned to Japan and debuted part of his new long program in an ice show. To many people’s surprise, he selected a Japanese style piece of music from the movie soundtrack Onmyoji. In this program, portrays himself as the character Abe no Seimei—a Japanese esoteric cosmologist from the 10th century.

“I want to challenge myself this (upcoming) season and expand my performing scale,” explained the two-time Grand Prix Final champion. “I kept listening to different kinds of music and tried to find out what fits me. During the process, I thought, ‘why not do something Japanese?’ and I eventually decided on this theme.”

“I think among all Japanese male skaters who are actively competing, I am the one who can present traditional Japanese style to this extent,” he continued. “I want to interpret both delicateness and strength, to pay more attention to the usage of bodyline in order to create a program that reflects my characteristics.”

However, instead of using a Japanese choreographer, he has chosen to continue to work with Shae-Lynn Bourne from Canada.

“To be honest, a Japanese choreographer might be able to create something more Japanese, but I was concerned then that the program would be too Japanese,” Hanyu explained. “Shae-Lynn she can pick up the wonderful elements she sees in Japan from a non-Japanese point of view.”

The three-time Japanese champion also revealed that during the process, he and Shae-Lynn went through a lot of traditional Japanese dances and musical dramas together in order to select some of the moves for the program. They decided to add some of his trademark moves, including hydro-blading and the layback Ina Bauer, to the choreographic sequence. Although the Biellmann spin wasn’t performed at the ice show, he revealed that he was practicing it in training and plans on using it in the program.

Aside from artistry, Hanyu also aims to further challenge himself technically by putting three quads in the long program, which was initially the plan for last season. He plans to open the performance with a quad Salchow, followed by a quad toe, and then put a quad toe combination jump in the second half of the program.

“To aim for Pyeongchang Olympics, there is no doubt that the bar of difficulty needs to be raised,” he noted. “Not only that, I think that our generation of skaters needs to lead the development of the sport.”

“It’s not just about the scores,” Hanyu quickly added. “I consider the score as a bonus when I skate well. I am not doing difficult things in order to get a high score, but to grow myself.”

To master this difficult layout with two types of quads (Salchow and toe) is the wall the reigning Olympic champion sees in front of him now.

“I need to land both the Salchow and the toe,” stated the skater, who earned a new personal best in his free skate at the 2014-15 Grand Prix Final. “If I fail to land the quad toe in the beginning, it impacts my layout in the second half, especially the triple-triple. As you can see, I am really bad at the double Axel (in case I need to change the layout), so the key is to nail the quad toe. By putting two types of quads in the program, I can expand my possibility of the program components.”

Hence the “wall” the Japanese skater feels he needs to climb. In addition to the quad Salchow and toeloop, he is also practicing quad loop now and keeps challenging it in ice shows these days. However, he has made it clear that he does not plan to incorporate it into his program at this time.

Looking ahead for the 2015-16 season, Hanyu, who is currently still the only man to break the 100-point barrier in the men’s short program (2014 Olympics), considers himself a “chaser.”

“Being the Olympic champion doesn’t change anything,” he explained. “It neither changes the fact that I feel exhausted after my short and long program, nor the fact that I’ve lost my world title. Now I am in the position to chase my teammate (Fernandez). He is always there close to me, so the regret of losing the world title is not going to disappear, but I want to turn this regret into a stepping stone, and move forward step by step.”

However, it’s not lost on Hanyu that there are indeed other rivals that he will be contending with. One of which three-time world champion Patrick Chan of Canada, who we will go head-to-head with at 2015 Skate Canada in October in Lethbridge, AB, Can. Before the 2015-16 Grand Prix assignments were announced, Hanyu had already expressed his excitement towards Chan’s comeback.

“I look forward to his comeback,” he said. “I am the one who’s in the position to play catch-up, and I enjoy the feeling being motivated.”

Hanyu also revealed that the experience of competing with Chan helps him stay focused.

“During the Olympic season, I couldn’t beat Chan at all during the Grand Prix series, and I lost myself,” Hanyu acknowledged. “I kept thinking ‘I must beat him, I must beat him’ but I couldn’t focus on my own performance and as a result, I got beaten by huge gap. Since then, I have learned to concentrate on my own condition and stay focused.”