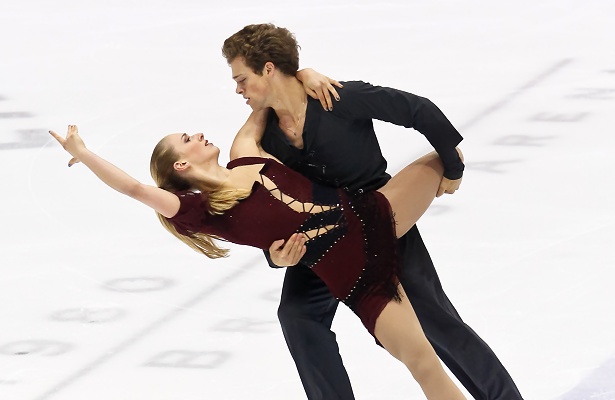 USA’s Rachel Parsons and Michael Parsons have won five medals on the ISU Junior Grand Prix circuit since their partnership began in February 2010.

Going into this past 2014-15 figure skating season, U.S. ice dancers Rachel and Michael Parsons were looking to improve upon the previous year and continue to show their best—especially on the international level. When all was said and done, the brother-and-sister team from Rockville, Md., either met or exceeded their expectations.

“Our main goals were to just continue building up our points internationally by performing well on the Junior Grand Prix (JGP) circuit and to place in the top five at Junior Worlds,” said Michael.

Rachel, 17, and Michael, 19, kicked off the season with a third place finish at their first JGP event in Japan and then pocketed the silver in Croatia. While they didn’t make the cut for the JGP Final, they were named the first alternates.

Prior to going to Greensboro, N.C., for the 2015 U.S. Figure Skating Championships, the team flew to Poland to compete at the Mentor Nestle Nesquik Torun Cup alongside training mates Lorraine McNamara and Quinn Carpenter. The Parsons placed second behind their teammates by 1.52 points in an international field of 22 ice dancers.

After a good showing in Poland, the team felt confident and well-prepared going into nationals, and were excited to show how far their programs had progressed since the JGP events.

“There was a really strong field of junior teams, which always ups the excitement for everyone competing,” noted Michael.

In Greensboro, the defending junior bronze medalists placed second in both the short and free dance to win the silver.

“As anyone who has ever finished in second place can tell you, it feels great, but there’s still a little missing,” admitted Rachel. “It was frustrating to come so close to a national title and not get it, but looking forward, we think of it as a good thing because it keeps us hungry!”

“It was also really fun competing with all our fellow juniors,” added Michael. “I think it’s a really great group of skaters that we love spending time with and it really showed the depth of the U.S. junior field.”

It’s not lost on the ice dancers, who are coached by Alexei Kiliakov, Elena Novak, and Dmitri Ilin, that they have somewhat been playing second fiddle to McNamara and Carpenter with whom they have been training with since 2006.

“We cannot stress enough how lucky we are to have training mates like Quinn and Lorraine,” said Michael. “We push each other every single day that we’re on the ice together.”

“We’ve known each other since we were little kids which makes us more like family than rivals,” added Rachel. “We are definitely close friends, but of course we’re also competitive. We are all incredibly supportive of each other.”

Like their counterparts, the Parsons felt prepared and confident on their arrival in Tallinn, Estonia, for the 2015 World Junior Figure Skating Championships.

“We were really excited,” recalled Michael. “There’s always pressure going into junior worlds because you know you’re competing with the world’s best at that level. We had high expectations for our performance there.”

In Tallinn, the team showed a solid short dance which featured a level four lift and twizzles, both of which were awarded positive grades of execution (GOE) across the board. The formal JGP Finalists also met five out of six of their key points in the Silver Samba pattern and were fourth in that segment of the competition.

“I loved the way we skated our short dance in Tallinn,” said Michael. “It was really high in energy and  I felt like we could have smashed through the boards and kept dancing. Definitely one of my favorite moments!”

“We were both very confident going into it, and that helped us to have one of our best performances of that program,” agreed Rachel.

In their free dance to music from Notre-Dame de Paris, the siblings were solid once again, earning a level four on their dance spin and both lifts, however, their circular steps were only graded a level two. Although they finished fifth, their total score of 140.94—a new personal best—was enough for them to claim fourth place overall.

“I think the free dance went well, but not quite as well as short dance,” admitted Rachel. “It comes down to the details and a few small mistakes lowered our score.”

“For example, my touch down in the one foot section of the circular step sequence cost us a lot,” said Michael. “Overall, however, I think we skated very well and had a strong showing.”

Rachel and Michael, who began skating together in 2010, were elated at having exceeded their second main goal for the season and felt that their finish proved that they were one of the top junior teams in the world.

“It felt really good to finish the season on a high note, but again, we have lots of room for improvement,” said Michael.

Like many other athletes, Rachel and Michael learned that even though they may skate their best, it doesn’t always mean they will get the results they hope for.

“We didn’t allow those moments to discourage us, though,” said Rachel. “Instead we use them as motivation. This season, we learned to be confident in our programs regardless of what scores we received.”

As brother and sister, the ice dancers have always been close, but with each season they learn more about each other and continue to improve their partnership both on and off the ice.

“I think this season we also grew a lot mentally in terms of preparation and communication with each other,” Michael shared.

Rachel and Michael are currently focusing their summer training on creating unique elements as well as improving their technique, endurance, and artistry on the ice.

“We’re incredibly excited to be doing Starlight this year,” said Rachel of the pattern for the short dance. “Pattern dances are always one of our major strengths, and with a large pattern dance such as Starlight, we’ll really get to showcase this.”

“It’s going to be a huge change to be doing a waltz after last year’s samba, but we’re excited,” added her partner.

For the 2015-16 season, the U.S. junior silver medalists will be performing their free dance to the Argentine Tango. Novak feels that this music will help the ice dancers to become more expressive—an area in which they have been working hard to improve in since last season.

“There is a stereotype that this music is reserved for a man and woman who are romantically involved, however, it’s not just about that,” explained the coach. “It is also about the essence of life which encompasses many emotions and personalities in a relationship between two people.”

The ice dancers had the opportunity to present their new free dance at the 2015 Chesapeake Open, which was held Jun 24-27 in Laurel, Md.

“Our new free dance is coming along very nicely,” said Michael. “It’s definitely something new and different for us, which has its challenges, but the program is already a lot of fun. I’m really excited to see where it will go from here.”

“It’s a different style that we’ve never done before,” added Rachel, “but it’s really helping us to grow as individual skaters and as a team.”

Rachel started focusing on ice dance at an early age while her brother was already on the ice with a hockey stick. In 2009, Rachel won gold on the juvenile level with former partner Kyle MacMillan, however, she teamed up with her brother the following year.

“My decision to go into ice dance was definitely influenced by my coach Alexei,” said Michael. “He showed me how beautiful figure skating could be.” With a chuckle, he went on to explain that he ‘really’ learned how to skate when he began taking lessons in ice dance. “My mind was totally set on hockey, but my heart was won over by the joy I got from learning the new sport.”

Michael, who graduated high school last year, is currently attending Montgomery College part time and plans on majoring in Biology and then going to Pre-med at the University of Maryland.

Rachel is going into her senior year of high school, however, she and her family decided long ago that they would not go the homeschooling route.

“For the past three years I’ve been attending my local public high school, but with an abbreviated class schedule that’s more flexible to my skating schedule,” she explained. “It’s tricky to balance my academics with my training, but it’s worth it, and my teachers and school friends are extremely supportive.”

Both skaters plan to coach part-time at their local rinks over the summer when not training or studying.

“This past year I’ve been spending much more of my free time on my artwork,” said Rachel, who also enjoys playing the guitar and hiking. “I’ve been taking a ceramics class for a few years now, and I’m also taking a studio art class. I love being able to show my creativity with different mediums, whether it’s skating, sculpting, or painting. My idea of a perfect day off is taking a walk through the woods with my dog and my sketchbook.”

Michael is extremely passionate about guitar and music, and after a hard day of skating, it’s very common to find him curled up on the floor listening to a favorite vinyl or playing the guitar. However, he is also a bit of a thrill seeker and craves adventure.

“I’ve always loved anything that really gets the adrenaline pumping, so sports like skiing, surfing, and mountain biking have always really appealed to me,” he said. “Now that skating is such an important part of my life, I don’t participate in them as much as I would like to, but I know that’s for the best. For now. I like to think that I live vicariously through my cousin Alex, who is an Olympic downhill skier for Lebanon and an amazing athlete!”

Since both skaters play the guitar, they frequently have “jam nights” where the entire family participates.

“Our little sister Katie is a beautiful cellist and singer,” said Michael. “Our mom also plays the flute and our dad plays the guitar.”

Apart from an occasional weekend beach trip, the ice dancers are at the rink training every day.

“Our family uses the Lake Placid Ice Dance Championships as a vacation, but the only ‘vacation’ Rachel and I get is the last few hours after we’re done competing at an international event,” Michael laughed.

The 2015 Lake Placid Ice Dance Championships are scheduled for Jul 29 – Aug 1, 2015, and the skaters are also looking forward to competing in their fifth JGP series later this summer. Their goals for this season are to mainly focus on their performance and improve the levels of their elements as well as their presentation.

“We tend to stay away from placement goals, as there are so many variables that we can’t control that go into final results,” said Michael. “However, we are definitely expecting to place very well this season.”

“The first half of this season is really about building confidence in both of our new programs,” added Rachel. “We’ve been working on more challenging transitions and unique elements, so we want to perform them consistently.”