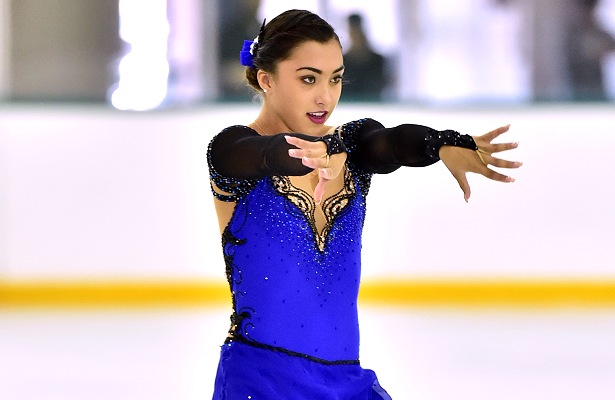 Earlier this month, Canada’s Gabrielle Daleman competed at the 23rd Ondrej Nepela Trophy where she finished fourth. The skater had mixed emotions about the event which was held in Bratislava, Slovakia.

“I had great practices all week and I was happy with my performance in the short,” she recalled. “I landed a triple Lutz-triple toe and triple flip and scored a new personal best.”

While morning practice for the free skate went well, the 17-year-old let it get away from her when it counted.

“I guess I wanted to medal and forgot that the goal was a clean skate,” Daleman admitted. “I was focused on medaling and made a few mental errors.”

The positive side is that her program component score was five points higher and the skater also achieved a new personal best overall.

“I know I can do a lot better,” said the Canadian champ.

Nevertheless, the skater received good feedback on her performances in Bratislava.

“I was told that I looked like I was enjoying myself and was more calm,” said Daleman. “They said that the programs were more mature and that they could see the total package coming together.”

A month earlier, Daleman was practicing her program when another skater, who was coming out of a jump, clipped her in the right knee with her blade.

“I was doing a run-through of my short and was just starting my step-sequence,” Daleman explained. “I was so focused on my program that I didn’t even see the other girl and then I just felt something hit me on the inside of my right knee.”

Daleman’s required eight stitches just under the kneecap, which was badly bruised. Fortunately, there was no damage to the tendons or muscles, and the skater attended Skate Canada’s High Performance Camp with the National Team a few days later.

Last season wasn’t an easy one for Daleman. The skater from Newmarket, Ont., found herself competing with strep throat at the 2015 Canadian Tire National Skating Championships, barely winning the title by a mere 1.78 points over Alaine Chartrand. After nationals, she competed at the 2015 Four Continents Championships, where she placed seventh.

Then, three weeks prior to the 2015 World Figure Skating Championships, the 17-year-old then dislocated her kneecap during practice.

“I was working on polishing my programs with Lori Nichol and my skate caught a rut and I twisted my knee which caused the dislocation,” she explained. “Luckily it popped itself back in, but I had to take the next five days off.”

The 2014 Skate Canada Autumn Classic gold medalist rested and went through physiotherapy and was back on the ice the following Monday. However, she pushed her knee too hard the first day back and the injury grew worse.

“Skate Canada arranged for me to see a specialist and I had an MRI that Wednesday morning at 3 am,” she recalled. “We had the results by noon the same day. Luckily there were no ligaments torn or any tear in my meniscus.”

As a result, the skater was not allowed to jump until March 18th, a week prior to worlds. As with most skaters, her goals going into the event were to simply skate two clean programs.

Unfortunately, the Daleman struggled in both programs in Shanghai, China, placing 21st overall.

“I was very disappointed with my performances at worlds,” she said. “It was not what I wanted to happen, but I tried my best under the circumstances. It was very draining on me physically, mentally and emotionally. Luckily, I had my parents and Skate Canada there to support me through the whole ordeal.”

Despite the disappointing finish, the skater chalked it up as a learning experience in terms of listening to her body and not always try to push through what she thinks are minor aches and pains.

“I learned to communicate with my team about any concerns and tend to them before they get worse,” said Daleman. “Before, I always thought I had to hide my injuries because I wouldn’t be allowed to skate. Now I know that if I tend to a sore muscle or joint early and not push as hard, they won’t develop into more serious injuries. I will have a long career ahead of me if I take care of myself.”

The skater has been working with closely with her father—her off-ice trainer—and feels that she is at 90 percent compared to last season.

“I personally have never felt so fit and comfortable in my life than I am right now,” Daleman revealed. “I’ve worked very hard with my dad to get to where I am today and I feel ready. I just feel so much healthier.”

Earlier this year, the skater sat down with her entire team to work on her plan for the season and says she is ahead of schedule.

“I’m so happy with how things are going right now and I’m excited for the season!” said Daleman.

Not long after worlds, Daleman went in for surgery to correct a deviated septum which was blocking 60 percent of the skater’s air flow through her nose.

“I broke my nose when I was 13 at a pool party,” she explained. “There was no skating or training of any kind allowed for six weeks. It was extremely painful and uncomfortable, and I wasn’t even allowed to run, so it was very difficult for me. I was eager to get back on the ice.”

Daleman also made a coaching change this past spring, moving from Richmond Hill, Ont., to Toronto, Ont., to train under Lee Barkell, Brian Orser and Tracy Wilson.

“I love working with them,” said the skater, adding that the transition was a good one. “Training at the Cricket Club is so different for me as there is everything I need. Beside the rink, there is a restaurant, pool, fitness center, dance room and a Pilates room.”

Over the summer, Daleman worked and improved on her jump technique, as well as basic skating and presentation skills.

“I’ve also been working on the triple Axel,” she offered. “I will add it when it is more consistent, but I also have other things that I want to work on at the moment.”

Lori Nichol choreographed two new programs for Daleman for the 2015-16 season. Her short program is to “(If You Can’t Sing It) You’ll Have to Swing It (Mr. Paganini),” performed by Nikki Yanofsky.

“This program is very flirtatious and a lot of fun,” Daleman offered. “I get to be playful with it and you get to see more of my personality.”

“It’s sassy and sensual at the beginning, but also has some sad or depressed moments in the middle,” she explained. “Then I get to be sassy and fun again. I get to show off the different personalities that I have, and it’s fun as I get to interact with the audience more.”

Daleman is a senior in high school, but will only be taking three credits a semester in order to allow for training time. Therefore, she will not be graduating until the following year. When not studying or training, the skater likes to dance, watch movies, and spend time with family and friends.

The 2014 Olympian will compete again soon at Skate Canada and Trophée Éric Bompard for her two Grand Prix events. Her goals for this season are to continue to improve and become a more consistent skater.

“I feel if I can accomplish this I will be able to defend my national title and then make the top 10 at worlds,” she summed up. “I also want to enjoy my time on the ice and my skating more.”