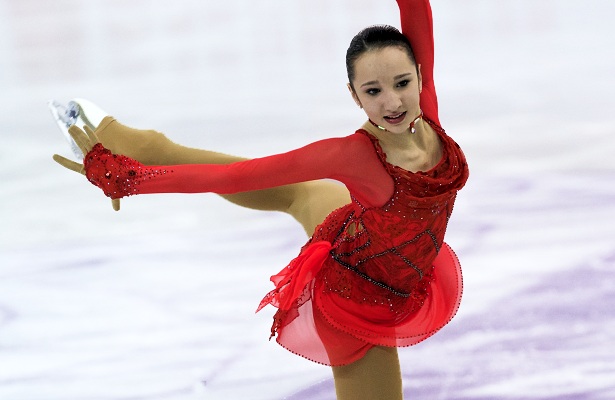 Russia’s Polina Tsurskaya, who made her international debut in August 2015 at the Junior Grand Prix (JGP) in Bratislava, Slovakia, won the title at the 2015-16 JGP Final in Barcelona, Spain, this past Saturday.

The 14-year-old won both the short and long program with more than 10 points overall (195.28) to spare in her first major ISU championship event. While the teen is not age-eligible for the European or World Figure Skating Championships, she is hoping she will make the Junior World team.

“I’ll go to Junior Nationals and I have to skate clean there and finish first so I can qualify for Junior Worlds and the Youth Olympic Games,” she acknowledged.

In Barcelona, the 2015 JGP Bratislava champion delivered a flawless short program to Albinoni’s “Adagio in G minor,” which featured a triple Lutz-triple toe, triple flip and double Axel. She earned a level four on two of her spins, as well as her straight line footwork, and posted a new personal best of 66.69 points.

“I did everything clean, but I could have had a few more pluses on my elements,” critiqued Tsurskaya. “I felt very confident in my performance and it was the best of the season so far. Technically, I could compete with (the senior Ladies), but my second mark is not as good yet and my skating is still junior-ish.”

The Muscovite, who is coached by Eteri Tutberidze and Sergei Dudakov, also delivered a solid long program to “Chess,” which featured seven triple jumps—including a triple Lutz-triple toe-double toe and triple Lutz-triple toe combination. Once again, two of her spins and her footwork was graded a level four, and she earned another personal best of 128.59 points.

With an overall score of 195.28—another personal best, the young skater was the clear winner in this event.

“I was a little nervous before the free skating, because I was in first place after the short program and I needed to skate clean,” Tsurskaya admitted. “The other girls are very strong, so I was focused on each element and I tried to execute them as ideally as possible.”

Tsurskaya realizes she lacks the power, speed, and confidence of the senior ladies, and that it will all come with time and years of training.