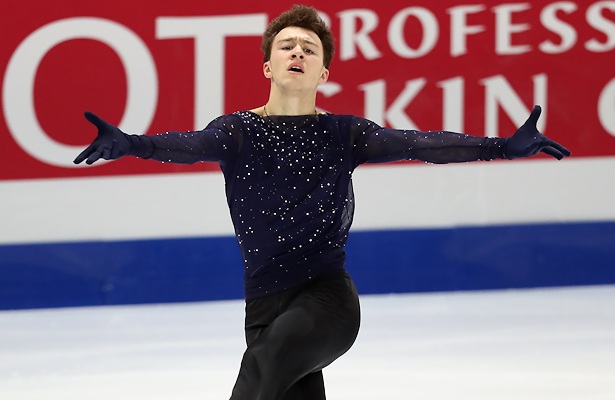 Aliev, who skated last, delivered a smooth routine to “I Close My Eyes” by Josh Groban, a new long program for him. The program featured a solo quad toe loop and two triple Axels, but he fell on an underrorated triple flip in the second half of the program.

His long program earlier in the season was set to the soundtrack from The Man in the Iron Mask, but the student of Evgeni Rukavicin was not comfortable with it.

“There is only one person that people associate with that music and that is Lesha (Alexei) Yagudin,” he explained. “That weighed heavily on me, so we decided to change it. I really like the new music, though.”

The 2016 Russian national junior champion improved his scores in all three segments of the competition and credited his hard work prior to the Final for his success.

“Of course I am pleased with the score, but most of all, I am pleased with my skate,” the 17-year-old said after the short. “I think today I really did all the elements with quality and precision. In the lead up to the Grand Prix Final, we changed the way we worked and I have been very focused. The audience was very warm and supportive and I enjoyed the skate a lot.”

Samarin attempted the most ambitious program which featured two quad toe loops and two triple Axels. He landed half of them them well (his second quad was flawed and he fell on the second triple Axel), however, the technical difficulty of the performance affected his presentation skills. It was particularly noticeable in the first minute of his “Maybe I Maybe You” routine which featured no elements and almost no connecting moves between two quad attempts. The 18-year-old was only able to relax when his key elements were over.

“Overall, I´m happy. I really raised my mood when I landed the first quad, but then I had the mistake on the second,” said the student of Svetlana Sokolovskaya and Alexander Uspenski. “Coming to the Final has given me a great experience and at my last Final as a junior, I really wanted to show everything I have worked on, everything I can do, and show the other competitors what I am capable of.”

The 2016 Russian silver medalist was happy with landing two quads in competition on his coach’s birthday.

“I wanted to really give my coach the present of going clean today and I did not manage that, but it wasn´t bad,” he explained. “It was my first time trying two quads in competition and I feel physically in much better shape than in previous competitions. It is my first Final and of course I now want to keep going and hopefully it will not be the only one for me.”

Jun Hwan Cha pulled one spot up to capture the bronze in his first Grand Prix Final. He also successfully executed a quad, in his case a Salchow, but fell on triple flip at the end of the program.

Russia’s Roman Savosin, who had a pretty busy and successful season thus far, also attempted two quad toe loops, however, both his attempts were called underrortated by the technical panel.

The student of Alexei Chetverukhin slipped to the fourth place with 212.39 points, ten points below his personal best.

“This competition has been really difficult psychologically,” said 2016 Tallinn Trophy champion. “I was really nervous and some elements didn’t work. My leg hurts a bit. It happened before this competition, but I can feel it now. I did all I planned to, but it didn’t come off. Now I just need to keep training.”

USA’s Alexei Krasnozhon attempted a quad loop, but the jump had a rough landing and was called underrotated by the technical panel. He recovered to land two triple Axels, but unexpectedly fell in the middle of the step sequence in the last minute of his entertaining ‘cowboy’ routine.

“I think that skate was amazing,” said the student of Peter and Darlene Cain. “It’s the best I’ve ever skated in my entire life. I wasn’t nervous, just excited, and I did everything I could do – well, apart from falling on my step sequence, of course. All the jumps were over and I just relaxed. All you can do about it is laugh. You take each competition as it comes and try to improve on it.”

“The U.S. Championships are in Kansas City, which is a real cowboy city, so my choreographer thought it would be good,” said the 16-year-old regarding his music choice. “My short program is Chopin, which the Europeans know, and we wanted something the Americans would know. I was Russian and am now American [and] I kind of fill both roles.”

Ilia Skirda of Russia, the only skater in the competition not to attempt a quad or a triple Axel, finished sixth with 207.11 points.

“The first element today wasn’t great,” said the student of Eteri Tutberidze and Sergei Dudakov about his opening triple Lutz. “I was nervous to begin with, but as the program progressed, I calmed down and it got better. I did all my jumps, so overall I am happy. I’m not disappointed (about coming last). I just need to keep working hard.”

The 14-year-old skater is the youngest competitor in the field, but he has a good foundation to build on: strong basic skating skills and convincing presentation, which helped him to sell his “Once Upon a Time in America” long program.

“It’s my first major competition and there are lots of people seeing me perform for the first time. I feel a responsibility,” he said about his first Junior Grand Prix Final. “It takes your breath away. Next time I will try to not be as nervous.”

“I’m trying a quad Salchow in practice and it’s close,” he added. “I’m now going to go to Moscow and keep working on my triple Axel and quad Salchow and see what happens. I still don’t know if I will use them for Russian Nationals, but maybe next season.”