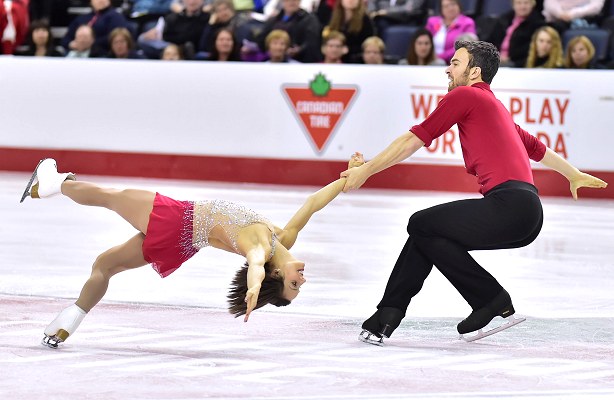 Not even a sparkly new dress could salvage the chain of short program difficulties that have haunted Meagan Duhamel and Eric Radford this season, cropping up again at the 2016 Canadian Figure Skating Championships.

“I was trying to revive the energy of this short program. It worked, didn’t it?” Duhamel said sarcastically.

Duhamel doubled her side-by-side triple Lutz and put a hand down on the throw triple Lutz despite mixing up the sequence of elements to make the “Moulin Rouge” program more comfortable.

“We haven’t been able to find our groove in the short program, so when we decided to rearrange the choreography, I thought maybe if I got a new dress it would kind of refresh everything about the program and it seemed to at home,” she said.

However, the plan backfired and the team had to settle for a score of 73.03 from the judges which left the team deflated.

“We have been training better than that,” said Duhamel. “We are more ready than we have been all season and we’ve done that short program perfectly in practice for the last two weeks. It’s not like that triple Lutz is 50 percent at home — it’s 99.9 percent at home.”

“There is never any excuse,” the 30-year-old continued. “It makes me extremely angry. It makes me sad in a way that I can’t figure it out. It frustrates me. We are trying to find that balance that created so much success last year and we’re trying so hard.”

“Sometimes you can’t always repeat what you did in the past and you have to figure out something new that works in the moment and we have yet to find that,” noted Radford.

Juliane Séguin and Charlie Bilodeau also struggled in the short program as she touched down on the both the side-by-side triple Salchow and the throw triple Lutz. Their charming and fast-paced “Monde Inversé” program still earned 69.73 points.

“Overall it was good,” Séguin said, teary-eyed, following her program. “I did a couple mistakes, but overall it was good because we went all for it. I had a little difficulty with the throw a couple of days ago, but I think in that moment I was just fighting with myself and not letting it go like it’s supposed to.”

“In general, I liked the energy we had,” Bilodeau added.

The performance with blemishes was not to their expectation following the success they had on the Grand Prix series, including two third place finishes and fourth at the Final.

“For our confidence, since the Grand Prix Final, it’s like if we reach another range of performance, we’re like “Okay, we’re now in that range of skaters and we need to skate like we are able to,'” said Bilodeau. “There is huge confidence in that.”

“All the results we got this year…is giving us power for the rest of the year,” added Séguin.

In third place, Liubov Ilyushechkina and Dylan Moscovitch skating a dazzling routine to Led Zeppelin and scored 69.50. Their only problem was a wild landing on the throw triple flip, however, Ilyushechkina held onto the landing.

“We kept our energy together and brought it through the program from the beginning to the end,” said Ilyushechkina. “It doesn’t matter for a little wobble on the throw Lutz as we connected back again and finished on the same level that we started.”

“We’ve really improved our connection and our ability to just take everything step by step; skate where we are instead of what’s coming next,” Moscovitch added.

Coming in as last year’s surprise silver medalists added strain for the team.

“It would be naïve of use and ignorant of us to say that the pressure isn’t there and we’re not aware of it,” Moscovitch said. “But…worrying about that is redundant. It’s futile. It doesn’t make any sense for us to do that because it’s taking energy from us enjoying our performances. Enjoying our performances will give us the results we want.”

In fourth, Kristen Moore-Towers and Michael Marinaro opened their short program with a horrible fall when he tripped on the triple twist entry and sent Moore-Towers flying, landing hard on her hip. Remarkably, they completed the remainder of the program flawlessly to earn 59.67 points.

“It’s unfortunately part of the sport,” said Moscovitch, Moore-Towers’ former partner upon hearing the news following his skate. “It’s dangerous and people forget that sometimes because we’re all sparkly, fancy and smiling, but things happen. The ice is slippery and we’re doing difficult things, so unfortunately sometimes in a split second some things can go wrong. I hope they are not hurt and they recover.”

Skate Canada reported that she is getting medical attention, but that she is fine and planning to skate the long program.

Thanks every1 for your concerns & kindness. You made my heart feel full. Not as much as a triple twist would’ve…But u know.. Life goes on?