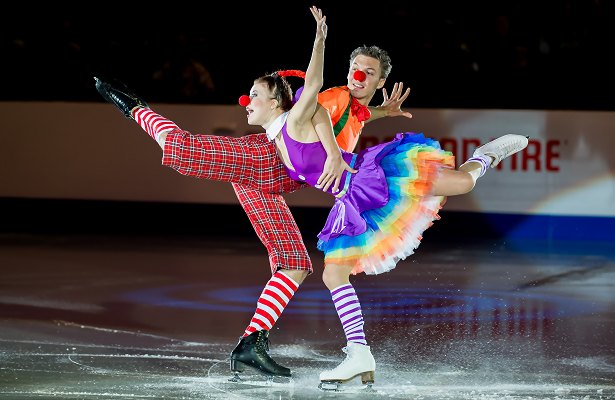 When Russia’s Ekaterina Bobrova and Dmitri Soloviev had to sit out the complete post-Olympic season due to Soloviev’s knee surgery and subsequent recovery problems, not many believed in a comeback of this talented ice dance team. However, they never gave up. Once Soloviev was finally able to resume full-time practice at the end of spring 2015, the Russians were determined to give it a try, and it was worth it.

The 2013 World bronze medalists received two Grand Prix assignments for the 2015-16 season, and they were ecstatic as they weren’t sure they would even get one. They took the bronze medal at Skate Canada—their first competition since the 2014 Olympic Winter Games, and a silver medal at NHK Trophy in Japan.

As a result, Bobrova and Soloviev qualified for the sixth slot for the 2015-16 ISU Grand Prix of Figure Skating Final in Barcelona, Spain. More importantly for them, they were the only Russian senior ice dance couple to qualify for the Final. The team finished fifth with two solid performances.

“For the free dance (in Barcelona), I’d give us five points out of five, because we were able to pull ourselves together from the beginning to the end of the program, in terms of emotions, technique and the quality of the transitions and elements,” Soloviev, 26 said. “We didn’t think that we were skating ideally and that we would deserve a higher placement.”

This actually served as motivation for the 2013 European champions since they missed the previous season while other teams were able to work and progress.

“We are still catching up with them this season,” said Soloviev. “Next season we’ll show different programs and different skating. We’ll be ready 90 to 95 percent and not 60 to 70 percent like now.”

Following the Grand Prix Final, the two-time European silver medalists went on to compete at their eighth national championships in Yekaterinburg, Russia. The team sat in second following the short dance behind Victoria Sinitsina and Nikita Katsalapov. During the free dance, however, the rivals made a costly error on the twizzles while Bobrova and Soloviev put out a stronger performance to overtake them and claim their fifth national title.

Despite the win, they were not at their best as Soloviev had some pain in his knee. He told no one about the pain, which was distracting, as he didn’t want to disappoint.

“We managed,” he said. “We were very happy with our performance and the scores. Once more, I realized that we could deal with problems.”

Sometimes the knee pain flares up, especially when he is training a lot, but Soloviev is confident that he keeps everything under control and plans to do more rehab after the season.

Bobrova herself felt tired at nationals after the Grand Prix season, and admitted this to her coach, Alexander Zhulin.

“I rarely allow myself to do this,” explained the 25-year-old, “but I felt that I had almost no strength left. However, we showed what we can do at this point, although the performance wasn’t our very best. We could have skated better and cleaner.”

Winning their fifth national title was special to the team after all they have been through. Before missing the previous season, they had won the past four titles consecutively. They knew what they were facing when they returned.

“Nobody promised that it would be easy and that we’ll start winning again right away,” said Bobrova. “Winning this title means even more to me than the competitions in the Olympic season. We are skating completely differently now. We are skating for each other, for the coaches, the spectators and just for our pleasure.”

“This season is like a discovery for us,” her partner agreed. “We feel completely new. I can’t even compare this Russian championship to the ones before, because it is something different for us to come back and to perform at this high level with these strong competitors.”

Now the focus shifts to the upcoming 2016 European Figure Skating Championships, which will be held at the end of January in Bratislava, Slovakia.

“We’ll still have to work a lot on many things,” Bobrova admitted. “Hopefully, Dima and I will succeed in polishing our programs so that they shine even more.”

The team from Moscow is skating to “Waltz Masquerade” by Aram Khachaturian and the march “Dance of the Knights” from Romeo and Juliet by Sergei Prokofiev for the short dance and kept their expressive “Anna Karenina” free dance they never could show from last season.

In Bratislava, Bobrova and Soloviev will compete again against teammates Sinitsina/Katsalapov and Alexandra Stepanova/Ivan Bukin, the reigning European bronze medalists. They will also be going up against the new Grand Prix Final bronze medalists Anna Cappellini/Luca Lanotte of Italy and defending European and World Champions Gabriella Papadakis/Guillaume Cizeron of France (who had to sit out the Grand Prix season due to Papadakis’ injury).

“We have a strong Russian team,” noted Bobrova. “I am convinced that at Europeans we’ll impress everyone with our authority, programs and great performances.”

“Finally, the Russian team is beginning to stand up,” she added. “Ice Dance used to be our strongest discipline, but at some point we lost this position. Dima said it correctly in a competition earlier this season: ‘We are climbing up the ladder.’ In order to reach the top three, we’ll still have to climb up a lot.”