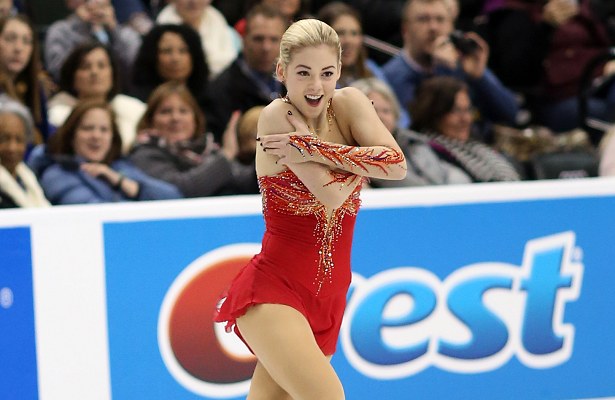 Gold landed a total of seven clean triples in her “Firebird” routine, including a triple Lutz-triple toe and double Axel-triple toe-double toe combination. The 20-year-old also earned a level four for all of her spins and footwork, and was rewarded with a score of 147.96 for first place in the long and overall (210.46).

“The key was really that I knew that I didn’t need to change anything,” she said. “I’ve skated that exact program at Toyota Center, in practice, I skated that program yesterday. I know every single step and the whole rhythm of the program.  It’s like a necklace that is strung.  I just know how it goes.”

“It’s when things start to change that I have problems and it leaves me flummoxed,” Gold added. “It’s so well-rehearsed that messing up feels out of character. I do clean programs at home, so doing it here feels good that all of my hard work paid off.”

Edmunds, who stood in first after the short program, was nearly flawless in her routine to music from Gone with the Wind. The teen from San Jose, Calif., nailed her opening triple Lutz-triple toe, however, she underrotated a triple loop in combination with a double toe. Like Gold, Edmunds recieved level fours for all her elements as well as many positive grades of execution (GOE) and scored 137.32 points. With a total score of 207.51, she placed second overall.

“I feel great,” said the 17-year-old. “I did a clean program and I’m really happy that I put everything out and did exactly what I wanted to do in my head. I’m just very happy with how I did overall.”

“I just did my normal practice yesterday, stuck to what I do every day at home,” she added. “I felt pretty comfortable yesterday in my afternoon practice and it definitely helped for me today.”

Wagner, who stood in fourth after the short, scored 135.47 points for her “Moulin Rouge” routine. The defending champion looked in good form and landed six clean triple jumps, however, she popped a Lutz at the end of her routine. Nevertheless, it was enough to put her on the podium with a total score of 197.88 points.

“The mistake caught me off guard,” explained the 24-year-old. “I was so excited for the program and then just didn’t think through the very end. So kids, it’s not over ”till it’s over!’ I don’t want that Lutz to overshadow this program. This program was by far my best one yet. It shows that I’m still building and that this is a two-part game. I am a long program competitor and my strengths showed tonight.”

On looking ahead, the skater said, “I need a new short program dress and to deliver my jumps.”

Mirai Nagasu moved up from fifth to fourth overall (188.84), while Tyler Pierce slipped from third to fifth place (188.50)