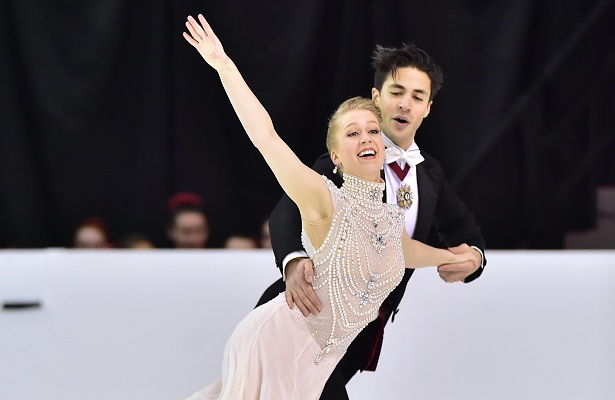 Kaitlyn Weaver and Andrew Poje showed in their waltz short dance set to Blue Danube that their undefeated streak this season is likely to continue at this week’s 2016 Canadian National Figure Skating Championships, just as it did last season up until this same point in time.

With three level four elements and impressive program components scores, including no less than “2s and 3s” across the board for grades of execution (GOE), the Detroit duo scored 76.20 points.

“The goal this season is to keep on improving, never stop learning, and never stop pushing,” said Weaver. “That has been a big player in the past couple weeks. We have worked with Shae Lynn Bourne, our long time mentor, and also with our main coaches on making everything better.”

The performance at the Scotia Centre marked their first competitive return to Halifax since they debuted here in 2007. At that time, they were a surprising third. Today, it would be a greater surprise if they were first without a significant lead.

“I think we have been pretty open with the fact that this year we feel more mature a little bit…wiser I guess, and I think that just comes with experience, but it’s knowing that we have the goods,” said Weaver. “It’s knowing that we have what it takes and that we don’t leave any stone unturned and that brings us confidence when we’re on the ice. That feels good. It feels like we are right where we need to be and we have the right people pushing us and guiding us.”

Playful and animated in bright fuchsia and turquoise costumes, Piper Gilles and Paul Poirier skated their Beatles routine with a renewed energy given the additional training time that provided their exclusion from the Grand Prix Final in December. The duo, who train in Scarborough, Ont., scored 70.63 points.

“We have been working so much the last two months on just ironing out some kinks that were kind of part of the program that were getting sticky and ruining the momentum from building throughout the program,” explained Poirier.

“Working on the character and the storyline and the intention behind our movements, I think that really showed in our performance today,” he continued. “We both felt like we were able to lose ourselves in the character, so I think that was a win for us. We really enjoyed performing for the crowd today and being out on competition ice.”

Known for their unique choreography and style, they continue to find their groove in the unexpected.

“We look at all the other competitors that are on the scene, and I’m not saying that we are always the different ones, but everyone tends to do the ‘lovie-dovie, the partner, the beautiful dances’ and we can do that,” said Gilles. “We showed that last year, but I think we keep wanting to try things that are interesting for us and pushes us forward. Doing something different and daring makes us feel like we’re doing our job and makes us want to come in and train every day.”

Elated with their balletic short dance score of 68.30 following a clean performance that has eluded them thus far this season, Alexandra Paul and Mitch Islam agreed that “relief” best characterized their feelings post skate.

“We have been struggling a little bit with the twizzles in practice this week so that was definitely in the backs of our minds a little bit,” Islam confessed “We have really been working on our head game this year with a sport psychologist, so I think we conquered that beast today. We smoked the twizzles in the first element and it was a good opportunity to exhale and let the rest of the program kind of go by.”

The charming short dance which revolved around a concept of Islam coveting his ballerina, included four level 4 elements, more than the other top-three teams.

“We had a tough year last season so…it feels so good,” said Islam. “It’s refreshing getting a score like that and putting out a performance like that. It really helps going into tomorrow.”

“It’s really amazing to be able to show everyone what we’re capable of and we’re just really excited to have finally been able to do that today,” added Paul.

The skate signalled their interest in galvanizing their position on the Canadian ice dance scene.

“The depth in ice dance is credible so we’re looking to establish ourselves as a top team,” said Islam.

Élisabeth Paradis and François-Xavier Ouellette of Quebec were fourth (63.03) and Nicole Orford and Asher Hill were fifth (61.46).